Written by Matt F. at 6:17 PM
I picked up five of these packs at the card show this weekend and I'm going to post them one at a time because these are just about the best Marvel cards in which foil stamping is just thrown everywhere. Plus having the original Human Torch, Marvel's first superhero, on some of the foil packs scores big points we me. 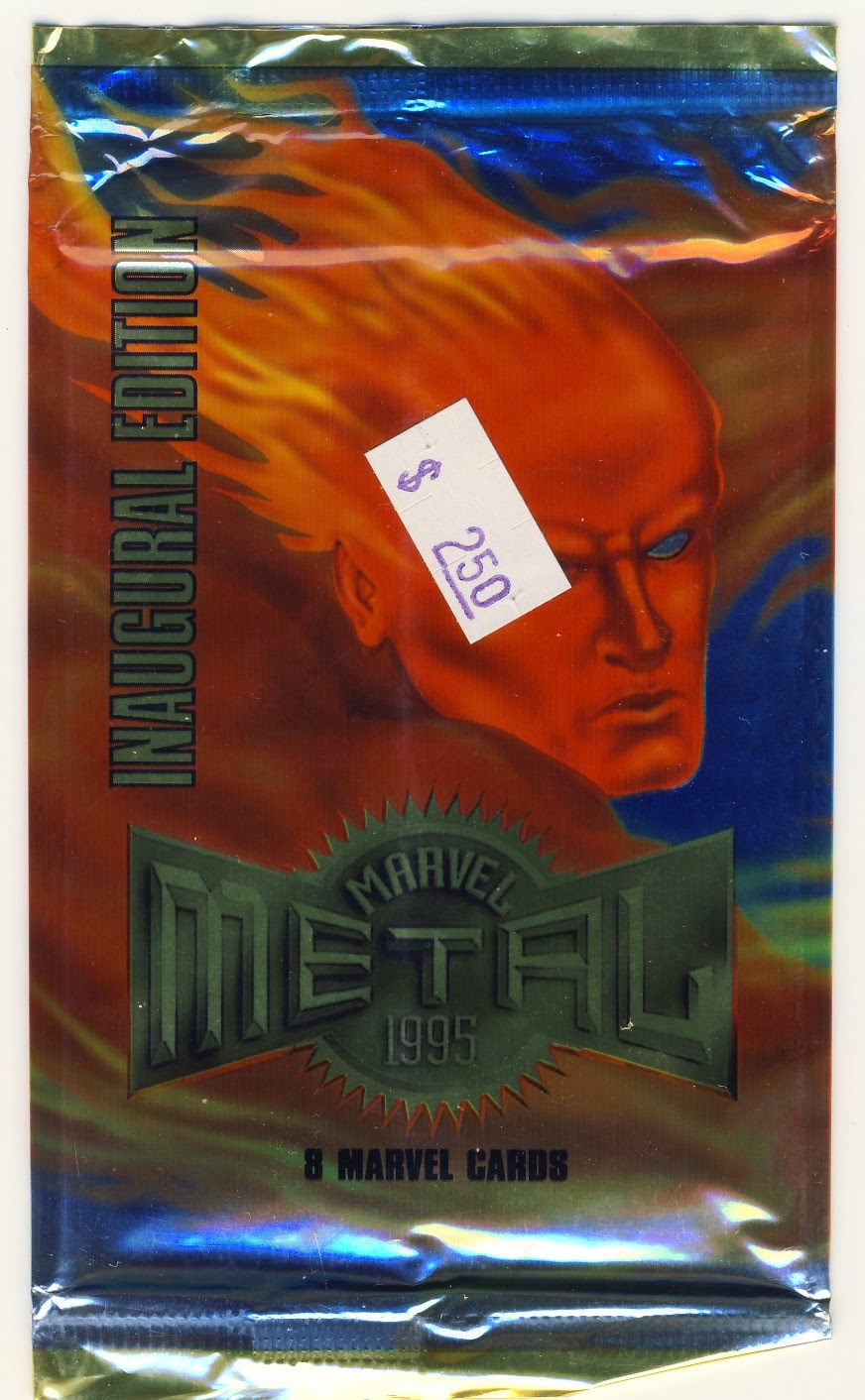 The set is made up of 138 base cards [137 + 1 checklist] and there is a subset of 137 "Silver Flashers" which you can find at the rate of one per pack. There is another subset called "Metal Blasters" made up of 18 cards and those are found one in every two packs. Those same 18 cards are also given the gold treatment in another subset called "Gold Blasters" which fall one per three packs. In this first pack I pulled six base cards, one silver flasher, and one metal blaster.

I got into comics right at the time of the Infinity Gauntlet and so Adam Warlock, the keeper of the Soul Infinity Gem, was one of my favorite characters. Given Marvel's list of upcoming movies, including two Infinity War movies, I'm guessing Adam Warlock will have a huge role in the upcoming films.

Here's what the back of the cards look like. I love that they included the "Power Grid" that allows you to compare each character's individual power with other characters. 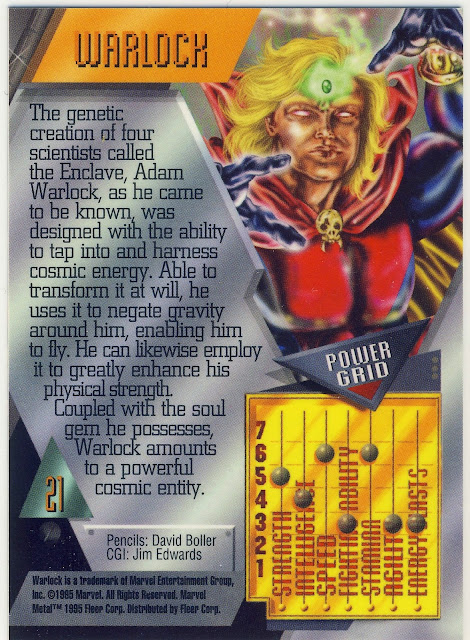 One of the Spirits of Vengeance, along with Blaze and Ghost Rider, Vengeance was Ghost Rider's arch-nemesis for a while and is basically a more ruthless version of him.

Taking a look at the Marvel Metal checklist there are 12 cards that show storylines that are alternate realities like this one in which the Silver Surfer puts on the Infinity Guantlet and becomes dictator of the universe along with his wife Shalla Bal.

There are 13 cards devoted to the 2099 cards in this set which makes sense since at the time of this set the 2099 storyline was going strong. Ravage 2099, if you don't remember, was a sort of Marvel Captain Planet that was battling ecological enemies.

Penance was a member of Generation X and is now called Hollow.


My first packs Silver Flasher is this Cyclops who has a haircut not dissimilar to Skrillex. 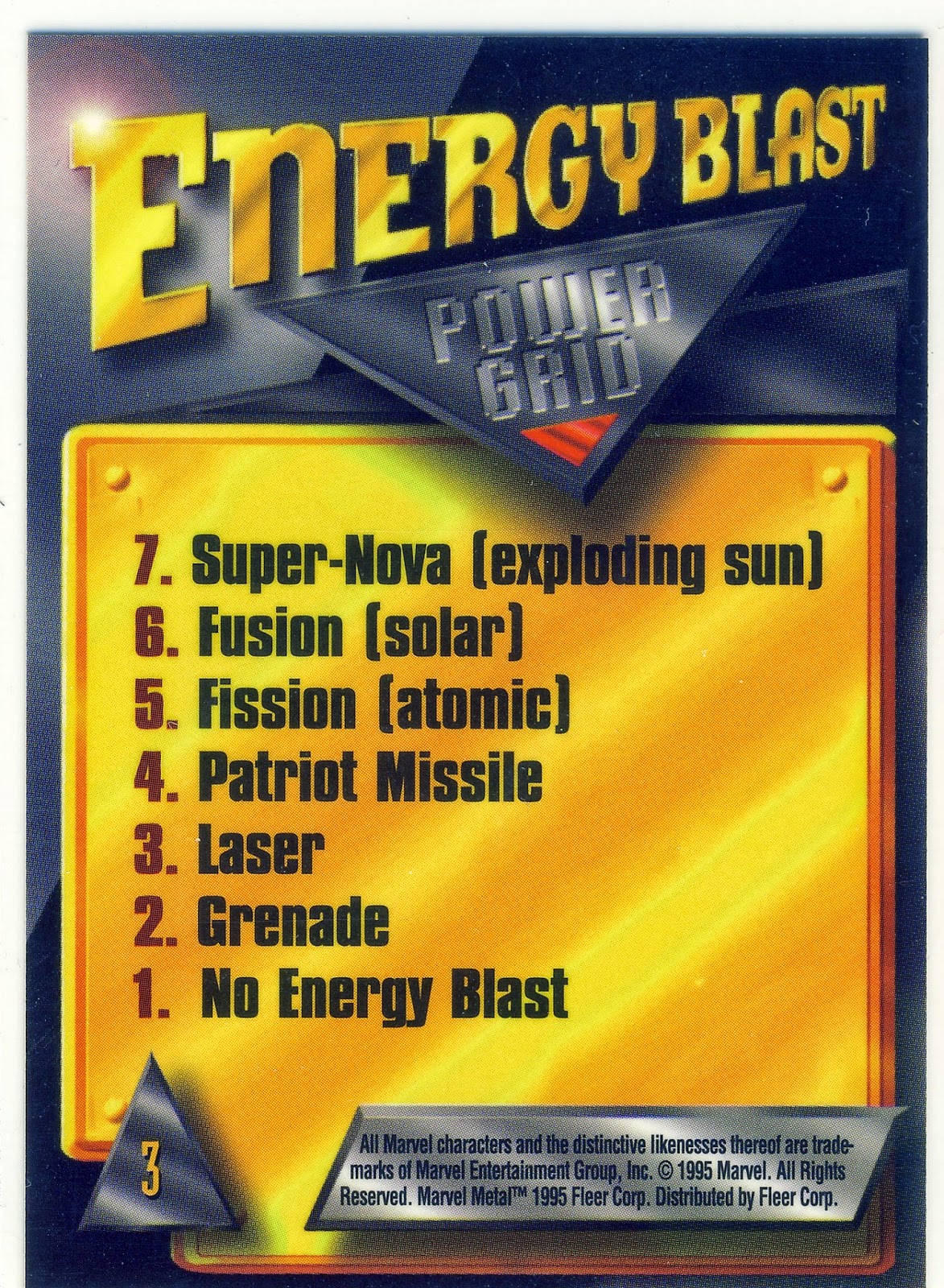 Bloodhawk is a mutant from the 2099 storyline what can turn into something that resembles a living gargoyle.

Here's a look at what the Metal Blasters look like with the "Marvel Metal" logo is shifted to the bottom left. Again, there are 18 of these floating around and the same 18 cards in the gold version...at least that's what I've pieced together on a nearly 20 year old set.