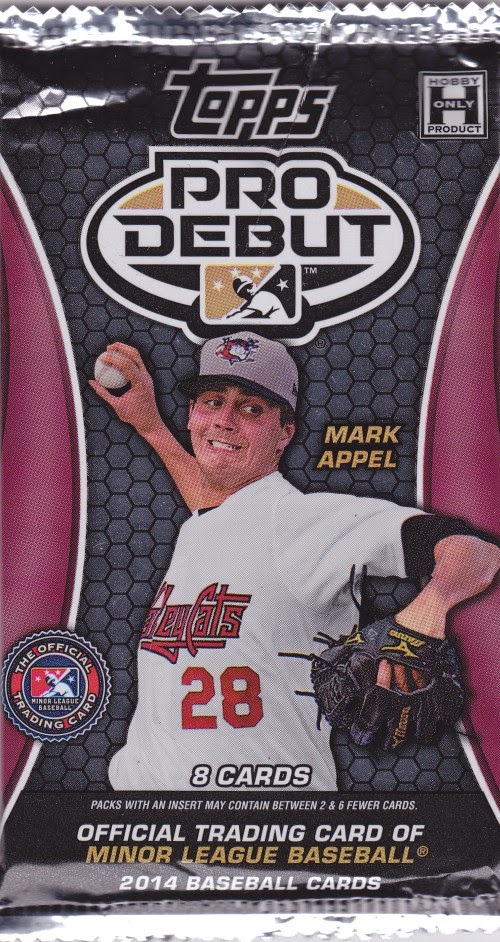 Here's a pack that was a random card show pickup last month. Minor league packs are fun to buy because you can put the cards away and forget about them for a year or three or five, and then find out later that you have an early card of some guy you've actually heard of. And as a Cardinals collector, I always appreciate getting ahold of cards from the organization's minor leaguers before they make it big. Let's see if we know anything about these guys yet. 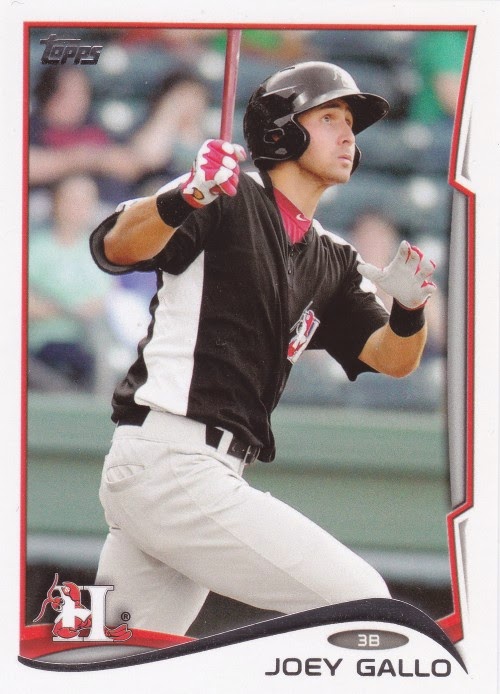 36 - Joey Gallo - This guy has absolutely crushed his way through his minor league stops so far. 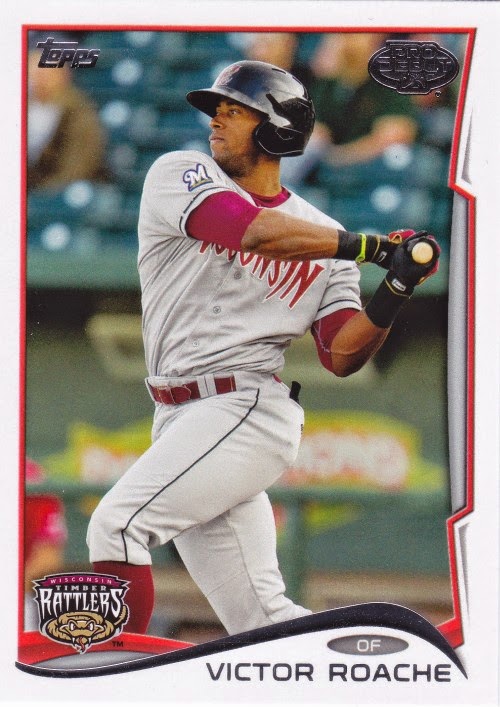 44 - Victor Roache - Roache's card has the Pro Debut logo on it, which I guess only means that it's his first pro baseball card according to Topps who makes up all of the rules. 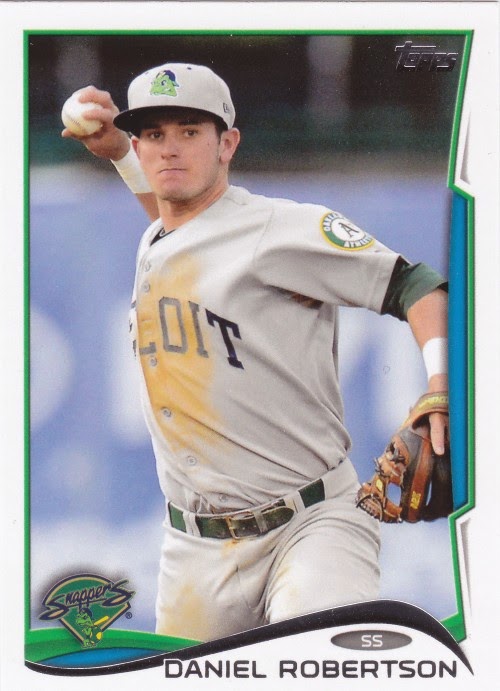 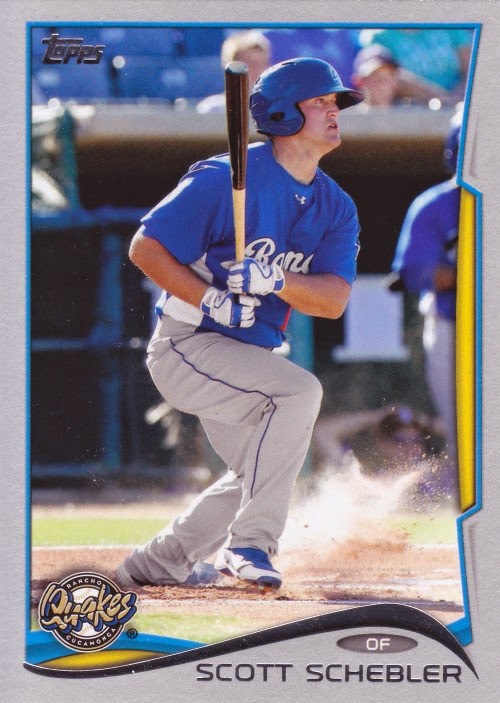 176 - Scott Schebler Silver (04/25) - Schebler is a Dodgers prospect and was the organization's Minor League Player of the Year in 2013. These silver parallels are apparently a 1:34 pull. 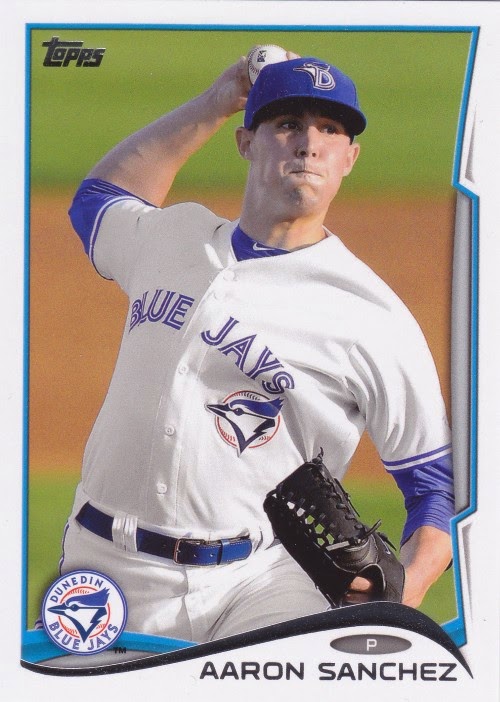 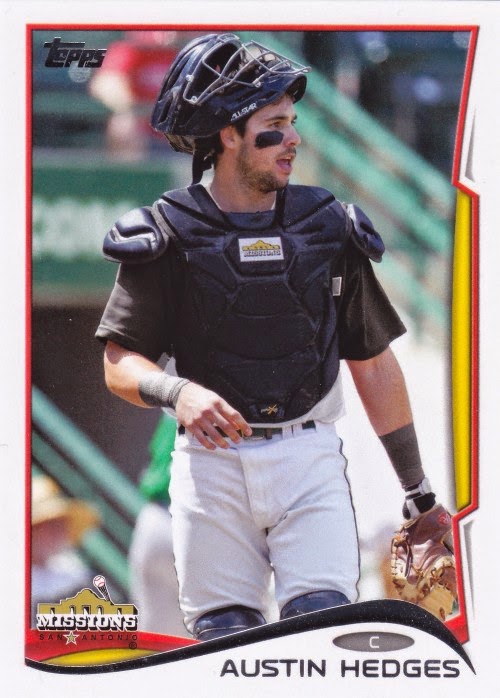 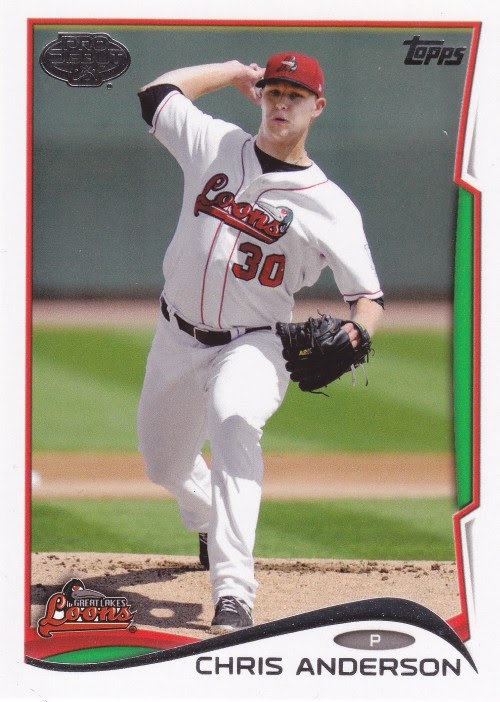 173 - Chris Anderson - Another Dodgers prospect, Anderson was a first round pick in 2013. 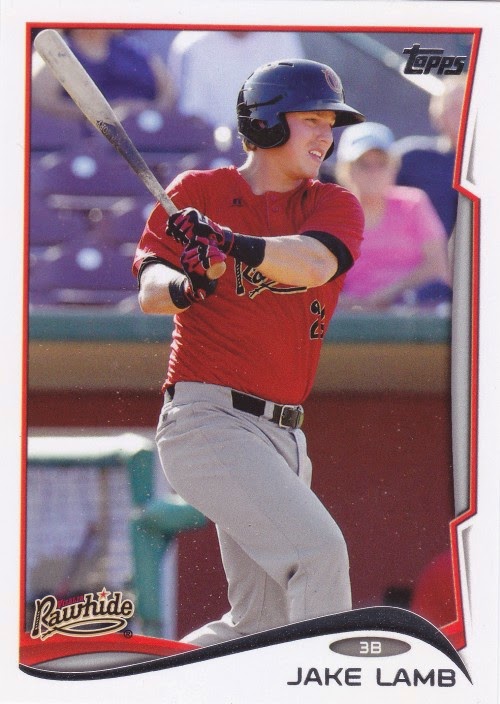 165 - Jake Lamb - Lamb is the second guy in the pack to have cracked the big leagues already, and not coincidentally the second guy I've actually heard of. He took over as Arizona's starting third baseman late this past season.

Victor Roache already has a professional baseball card. He had a Bowman Chrome card back in 2012. He's still an intriguing name though in a sort of mediocre Brewers organization.

Daniel Robertson emerged as the A's best prospect this year after the Samardjiza-Russell trade. Amazingly enough the A's have managed to build a contender out of cheap expendable parts that weren't brought up in their system (they traded their homegrown guys away to get said parts) so Robertson could be traded away to get them some more talent.

Aaron Sanchez might find himself in the rotation next year. The Blue Jays have a ton of questions surrounding most of their starters and it doesn't hurt to have your next generation of Jays pitchers (Sanchez, Norris and Stroman) get some more big league innings under their belt.

Austin Hedges should be in the bigs soon. The Padres won't rush him (he might start 2015 in triple-A) but he doesn't have much left to prove in the minors.

Chris Anderson has flown under the radar and is one of the more overlooked arms in the Dodgers farm system. He won't be the next Kershaw but most think that he can offer what Chad Billingsly can when he's healthy.