Written by Billy Kingsley at 6:57 AM
I generally don't do theaters so I finally saw Guardians of the Galaxy on DVD a few weeks ago. I was grossly underwhelmed by the movie- it was no where NEAR as good as most of my friends said it was. Perhaps I had just built up too high expectations, but when it was done I felt much disappointment. The attempts at humor seemed forced, and the lead character was more annoying than anything else- not likable at all.

I had purchased two packs of the card set Upper Deck produced when they were at my local Target, and saved them for after I saw the movie. I opened this one shortly after finishing the movie and finally got around to scanning the cards I got. I scanned the pack back in August and didn't open it until February. Yes, I sometimes play the long game when it comes to cards. 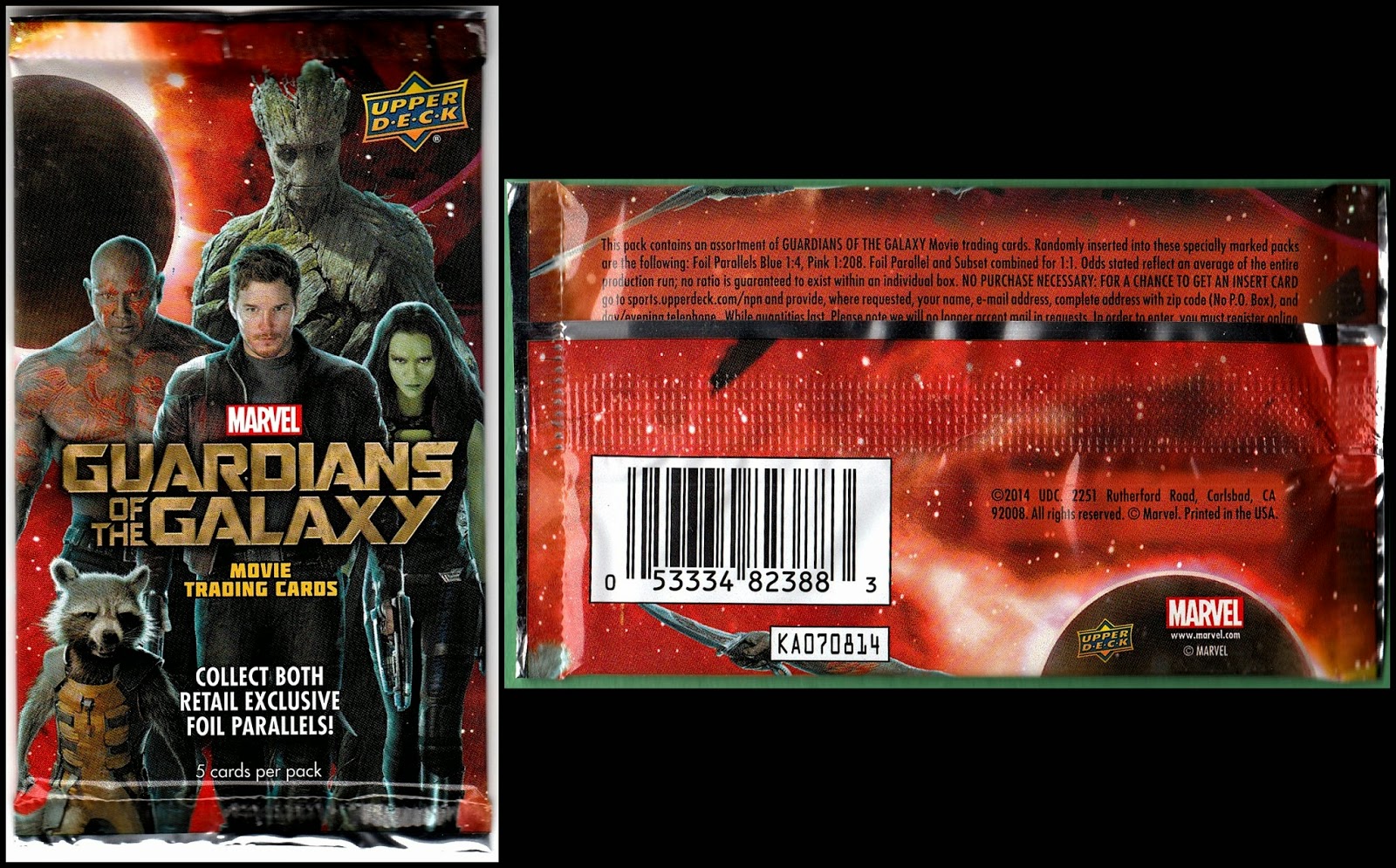 First card up is a card of Yondu. 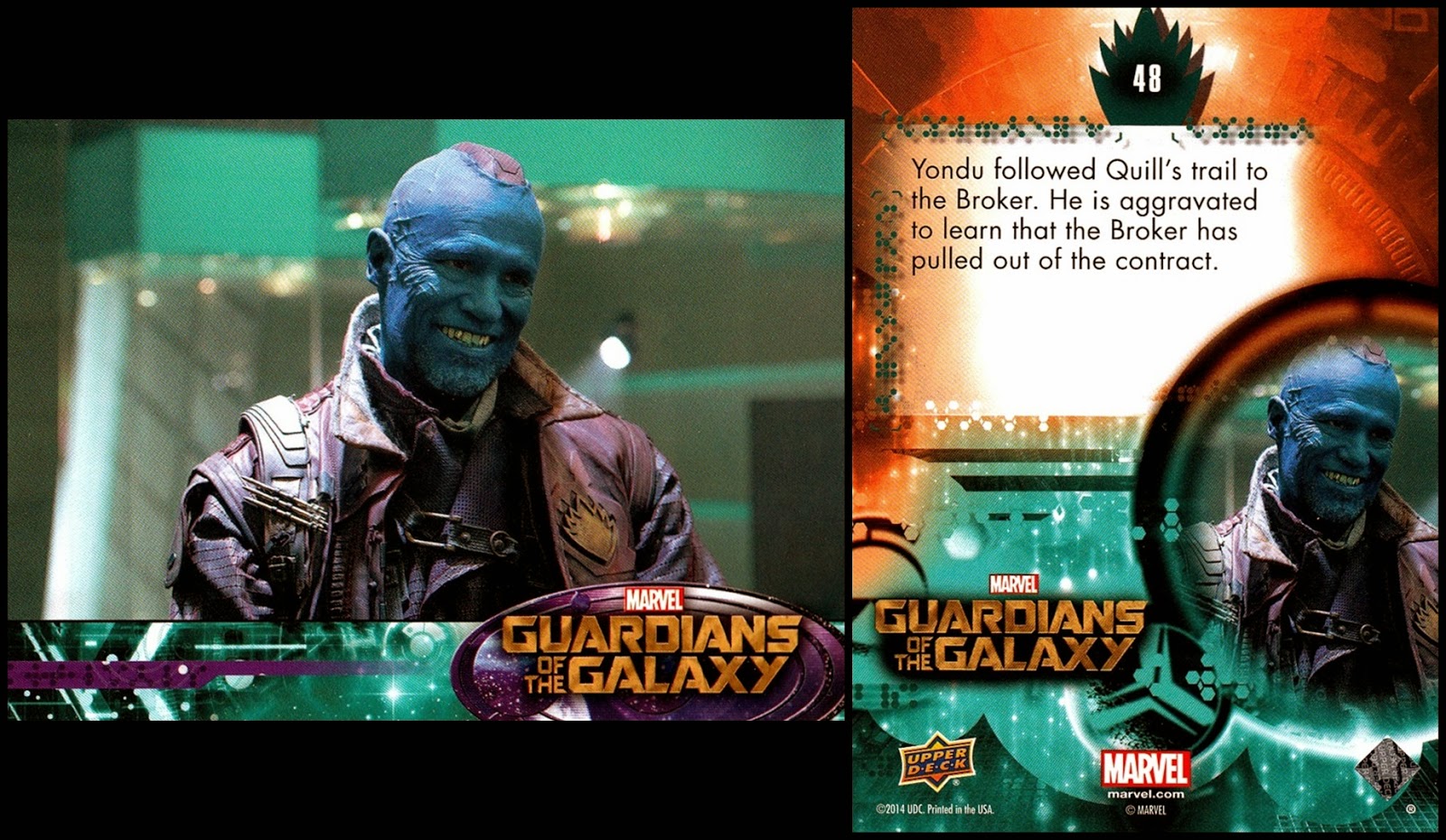 That's the basic design of the cards. Again, I am underwhelmed.

Card #2 in the pack turned out to be #90, which is the last card in the set. By these cards being issued well in advance of the movie, NONE of the Marvel Cinematic Universe cards detail the full movie, they all stop before the end. Not that it really matters all that much- I found the end to be rather lackluster in and of itself. The best part of the movie came shortly before this card did. 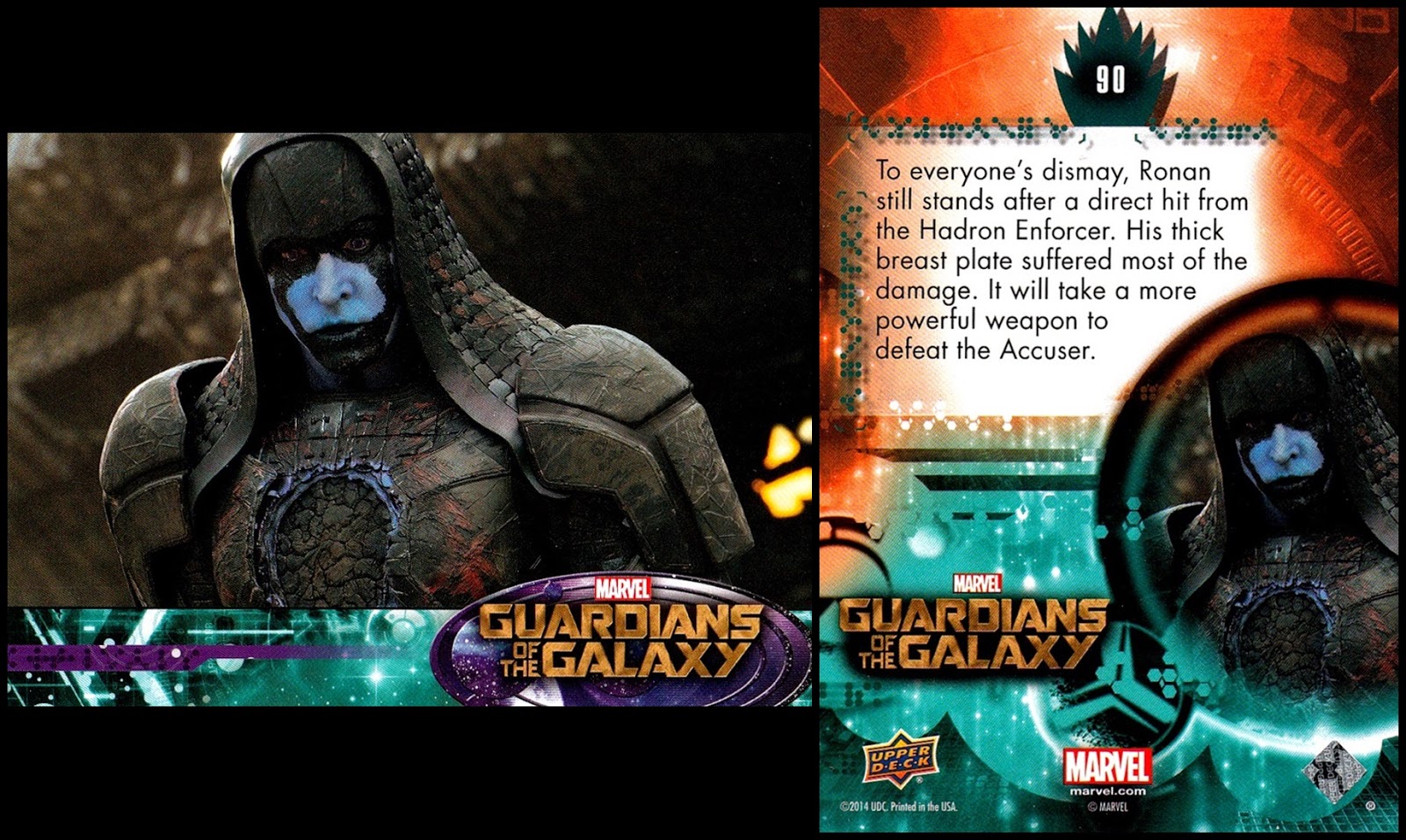 Card #3 in the pack is a blue foil parallel, which is exclusive to retail at 1 in every 4 packs. It is of Drax the Destroyer. Apparently what he destroys is shirts, because he doesn't wear one at all throughout the entire movie. 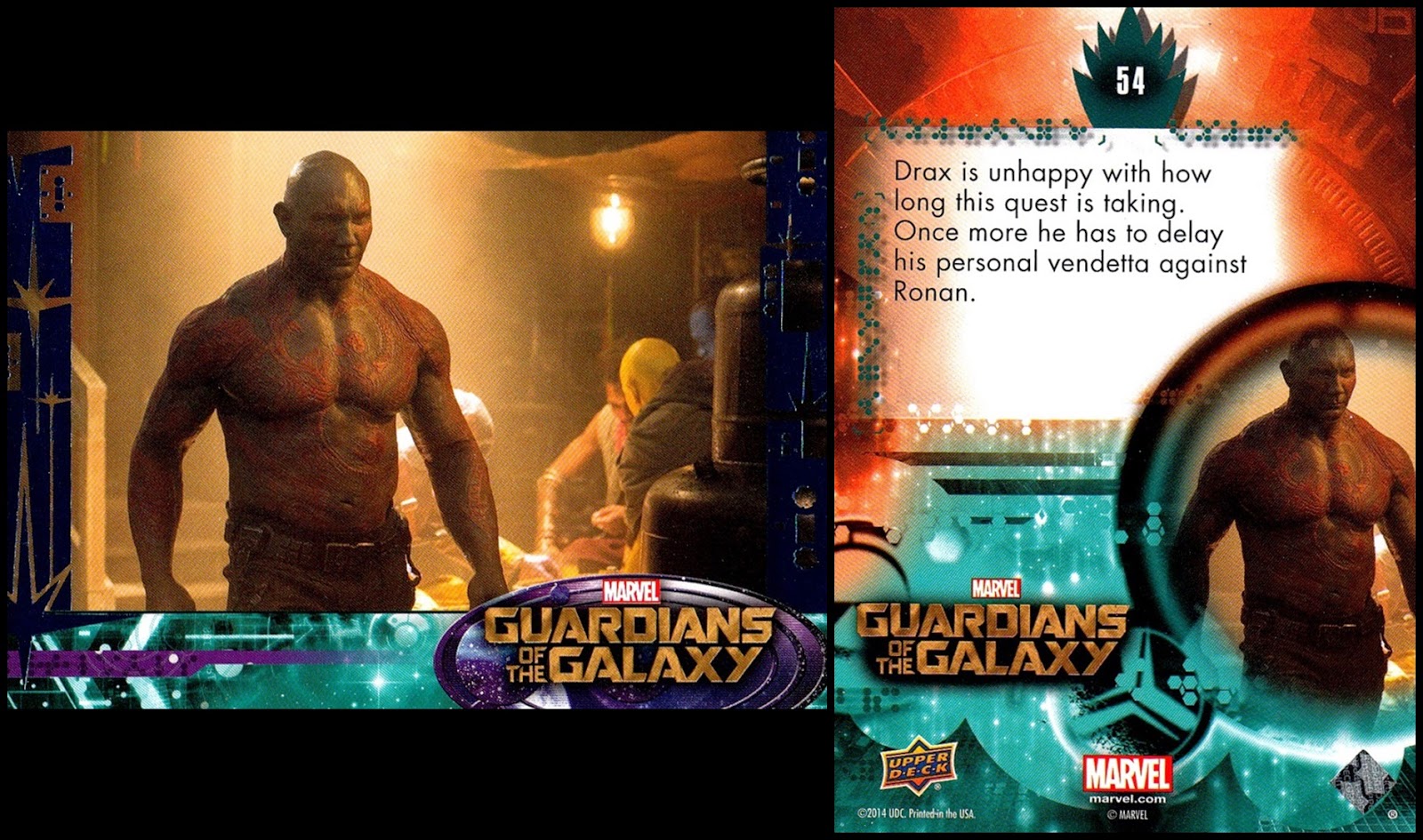 I do like how the Nova Corps logo appears in the foil design.

The fourth and penultimate card is of Peter Quill, Star-Lord. My least favorite character in the movie. Unfortunately it focuses on him throughout. I would have enjoyed the movie a lot more had he not been in it. At #11, it's the lowest numbered card in the pack. 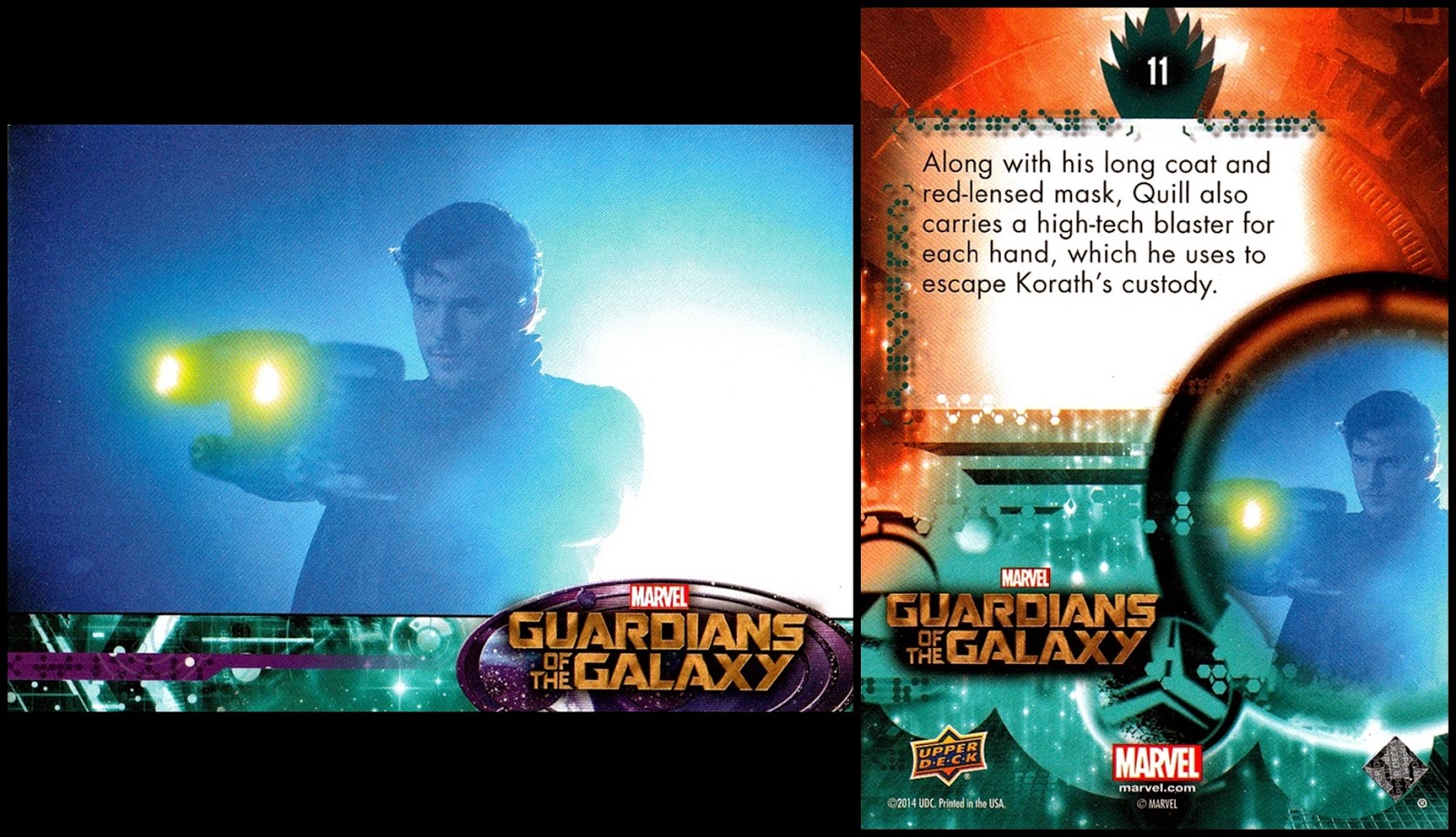 The final card in the pack is #84, Gamora. My first pack was entirely devoid of Groot, my favorite character, and Rocket, my second favorite character. Maybe they will appear in pack #2, which I have not yet gotten around to opening. 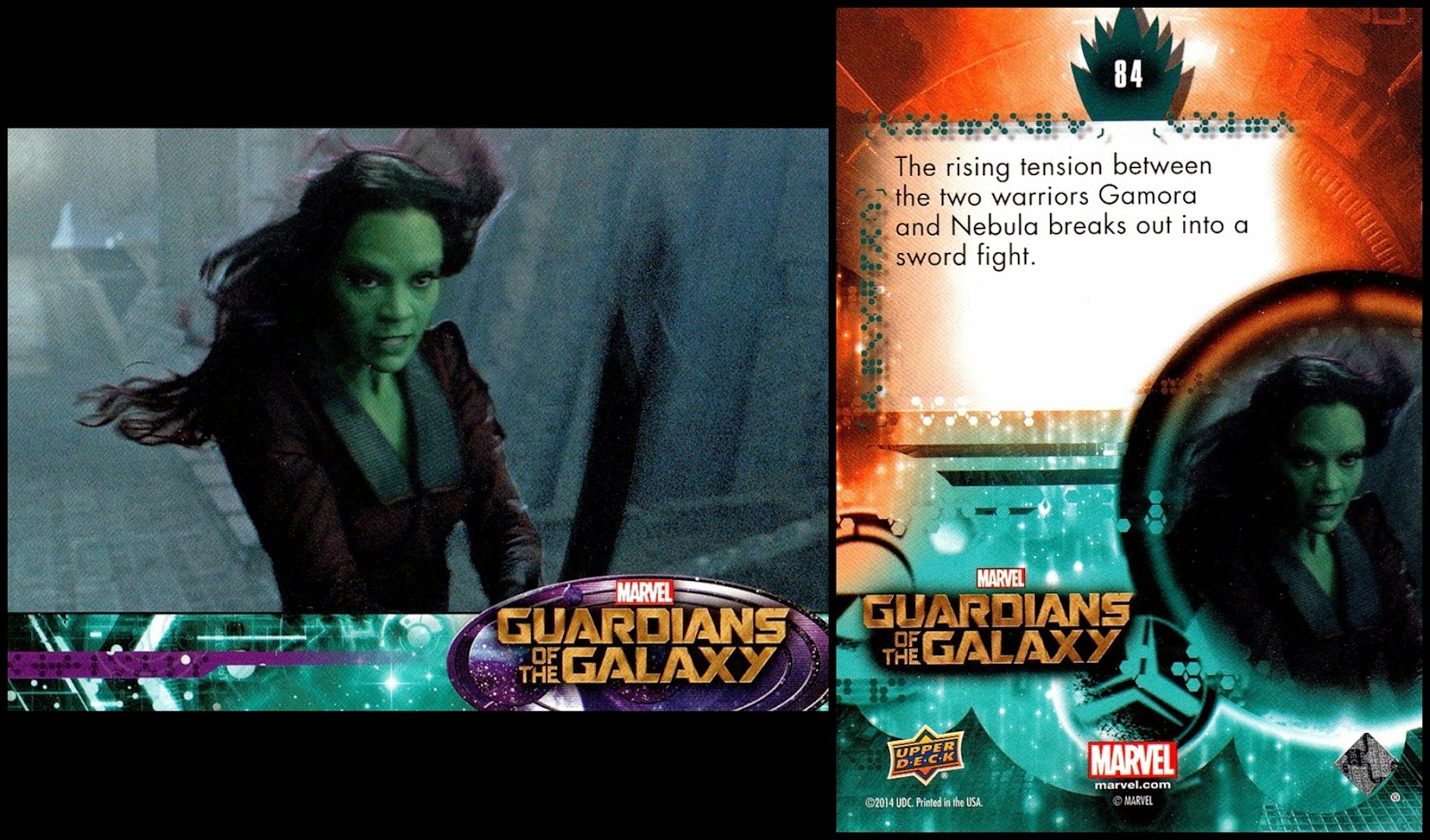 So, in conclusion, an underwhelming pack of cards for an underwhelming movie. Even with my poor review, I am looking forward to the next movie anyway, as it is going to tie in heavily with the Avengers movie series, supposedly.

As always, Thanks for reading!

Are there some examples of good sets based on movies? Pretty much every set I can think of had a pretty lazy design and were similar to these (film still on the front; vague description of the character or plot on the back).

I think almost anyone who didn't see it in the theater, and saw it after all the rave reviews is bound to be disappointed in this movie. The main reason so many people enjoyed it in the theater is that expectations were very low and it turned out not to be crap. Granted, it is very much a comic book movie, and only works by comic book logic (meaning whatever is necessary to forward the plot, such as it is) so it's unrealistic to expect a lot of sense, common or otherwise.

Aren't movie cards pretty much always boring? Seriously, what can you really do with a set that is entirely stills from the movie and designed to follow the story?

Valid points guys, but I still am not seeing how at least three people I'm friends with on Facebook could say that this was better than the Avengers!

My, my, how card vendors have fallen. This card set barely qualifies as "designed". I'm wondering whether a robot put it together, or if offshore unethical labor practices are in the mix.