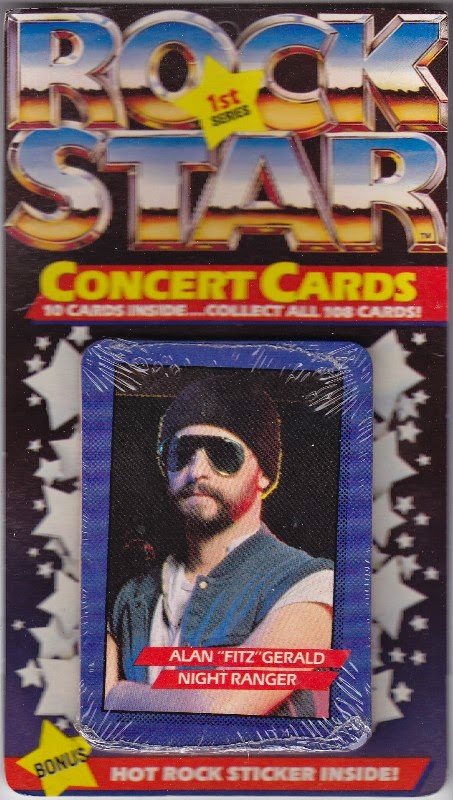 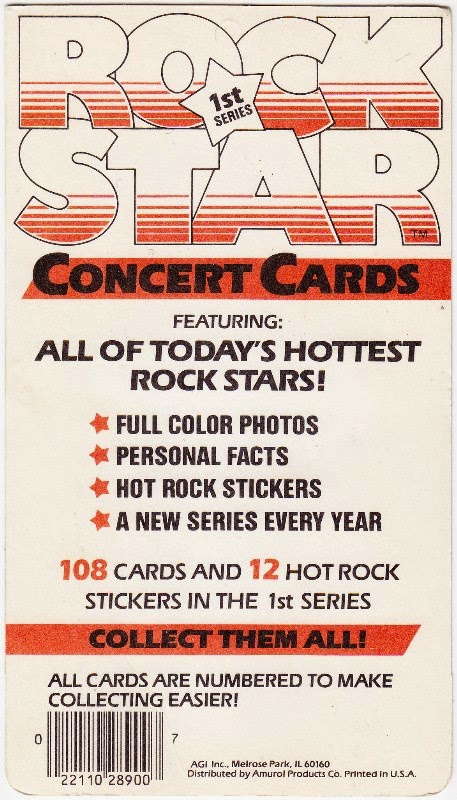 I grew up listening to 70's and 80's rock, so I was pretty excited to come across this set last year.  It contains 108 cards and covers twenty different artists and bands, ranging from The Rolling Stones to Quiet Riot.

I ended up buying a complete set last December off of eBay for $10.50 (+ $8 shipping).  Until yesterday, I had no idea how the cards were distributed.  Then while walking around the flea market, I stumbled across a vendor who had one complete 24ct. box and another box with nineteen packs.  I ended up buying the whole lot for $30. 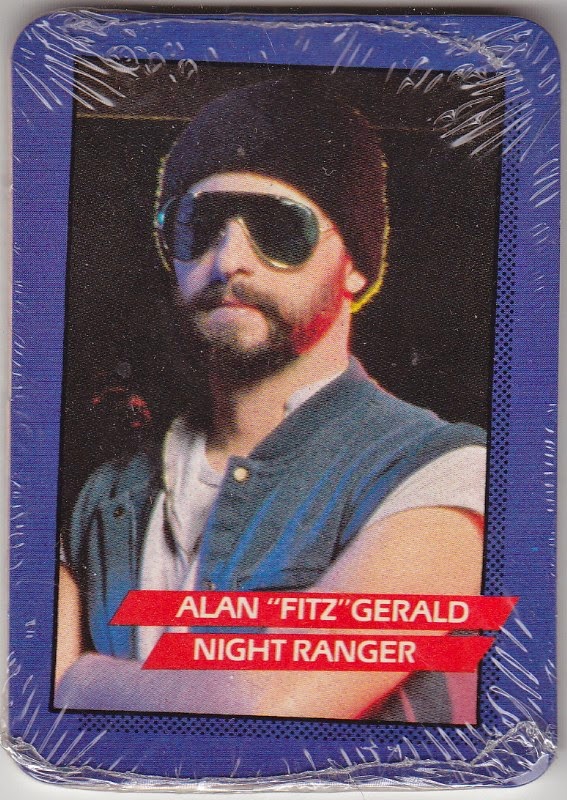 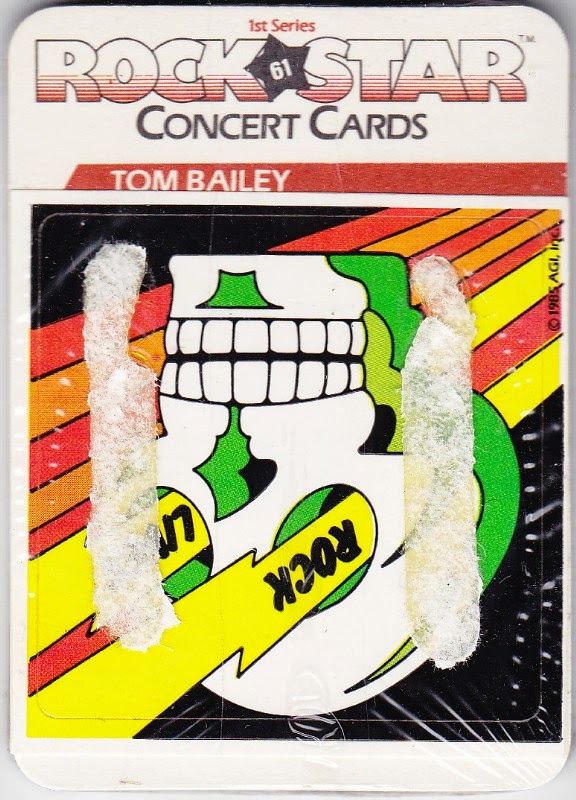 Each pack contains 10 cards and one "Hot Rock" sticker.  The cellophane wrapped packs are mounted onto a piece of cardboard that contains product information.  Since the cellophane wrappers are clear, collectors were able to see the top card in the pack.

I had two packs with Alan "Fitz" Gerald on the front, so I decided to bust one open for you guys. 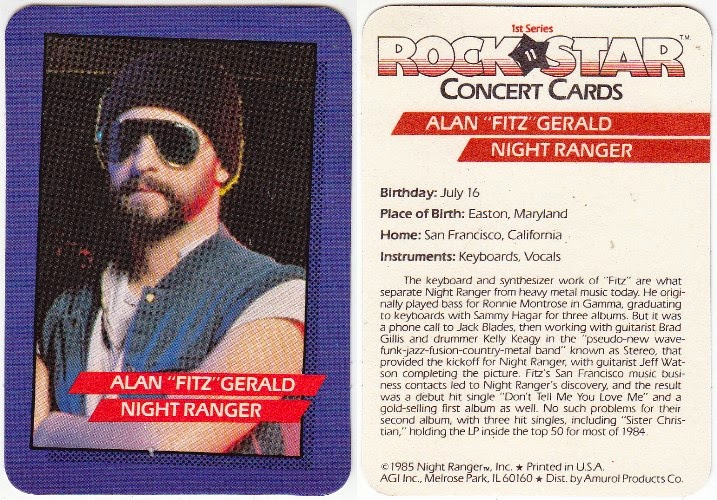 We kick of the pack with the keyboardist for Night Ranger, who had several Top 10 hits: Don't Tell Me You Love Me, Sister Christian, and Sentimental Street.  But my favorite Night Ranger song is their power ballad, When You Close Your Eyes. 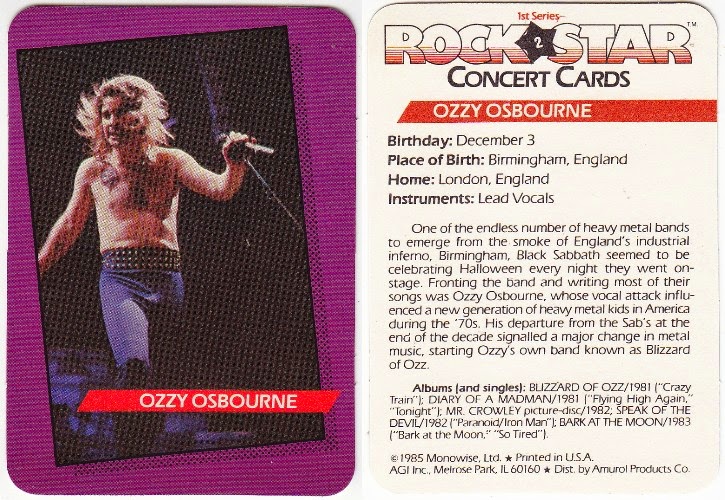 Next up is that guy who bit the head off a bat.  I've got to admit... Ozzy freaked me out as a kid.  But by the mid 80's, I had grown to appreciate his music... especially the stuff during his tenure with Black Sabbath.  Paranoid rules! 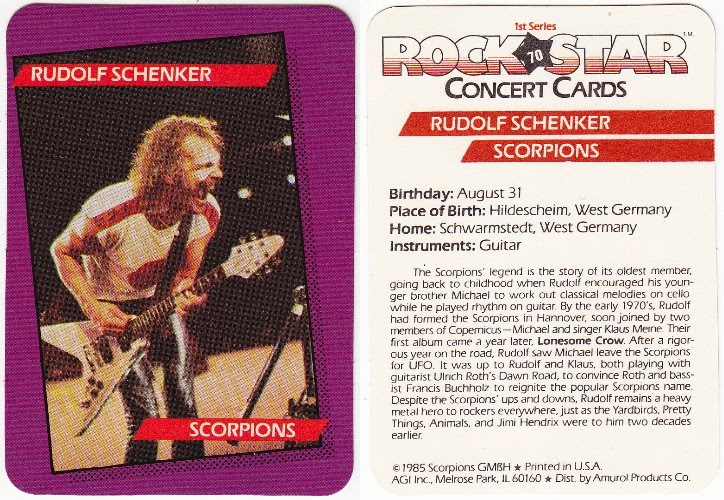 MTV played a huge part in me rockin' out to the Scorpions.  I was obsessed with watching the video, No One Like You.  It was a combination of growing up near Alcatraz, the crazy guy with forks on his eyes, and of course the song was pretty good too. 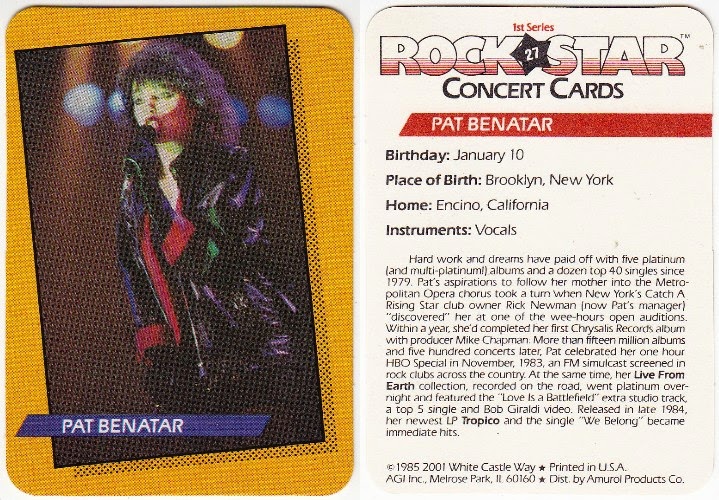 Pat Benatar always had catchy songs that were easy to memorize.  I'm sure I drove my mom crazy listening to my 45 of Shadows of the Night over and over again.  Thirty years later, I'm sure I can still sing this song word for word. 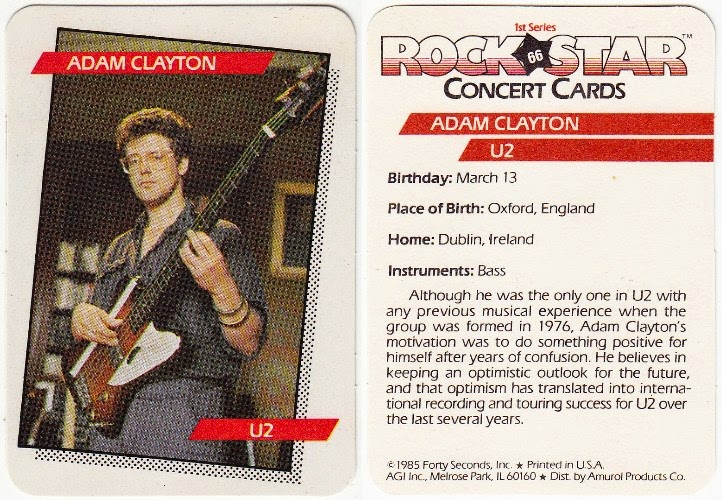 When it comes to U2, I was sort of a late bloomer.  Of course, I had heard a lot of their earlier music, but I didn't really get into them until they released their fifth album, The Joshua Tree.  From there, I worked backward.  They have so many awesome songs, it's hard for me to choose a favorite.  However the three that currently stand out are Sunday Bloody Sunday, In God's Country, and With Or Without You. 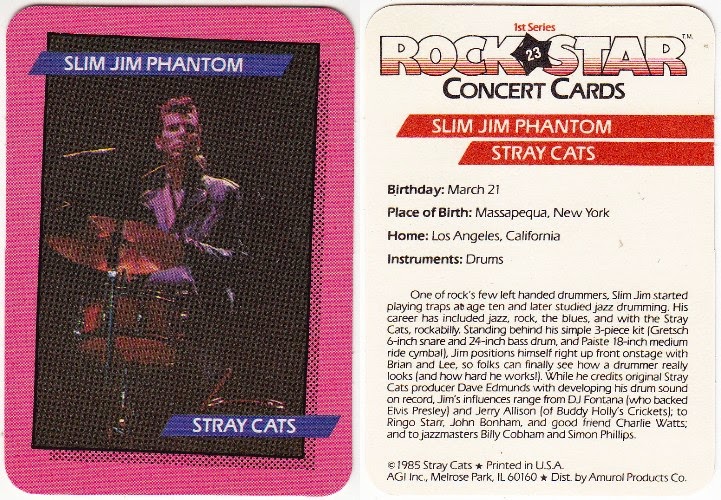 I know they're one of the most popular rockabilly groups out there, but I just couldn't get into the Stray Cats.  I had several friends who went through a phase in their lives where they dove into the whole "rockabilly" and "swing" scene.  When they were done, I found myself listening to Reverend Horton Heat, Royal Crown Revue, and even the Brian Setzer Orchestra... but not the Stray Cats. 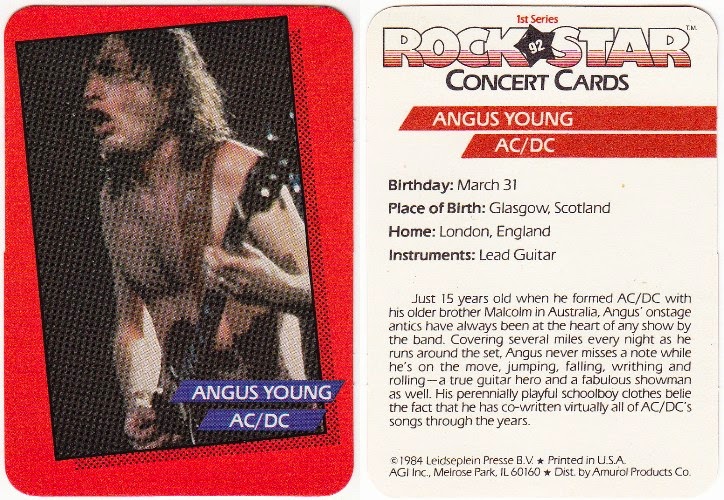 I might be mistaken, but as far as I know only four of the ten cards feature artists/groups inducted into The Rock and Roll Hall of Fame: Ozzy Ozbourne (Black Sabbath), U2, Daryl Hall (Hall and Oates), and AC/DC.  It's not surprising that AC/DC was the first among them to get inducted.  I haven't met many people who don't appreciate their music. 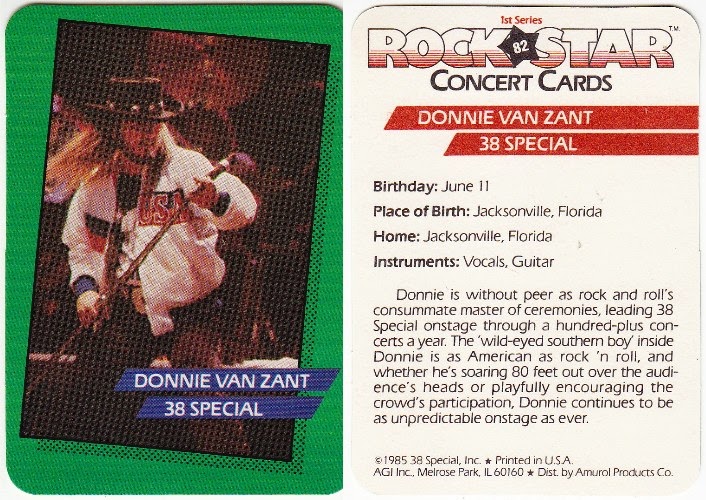 I haven't thought about .38 Special in over twenty years, but seeing this card brought back great memories.  Their songs Hold on Loosely and Caught Up In You are long lost classics.  After this post, I'm off to Amazon to see if they have a greatest hits CD. 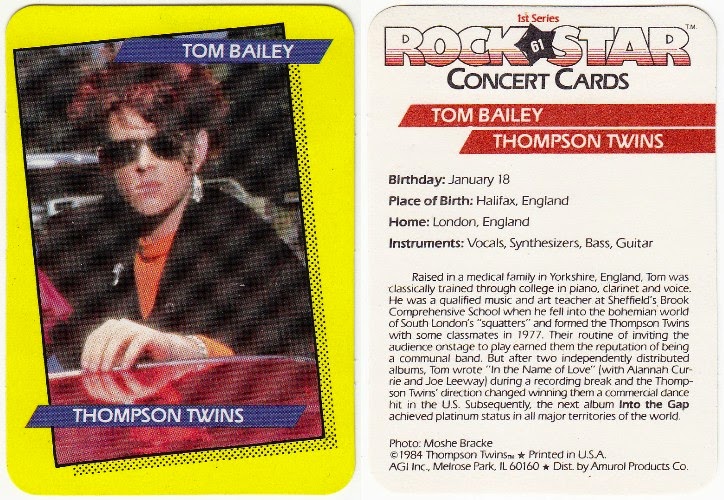 I was in middle school in the mid 80's and during that time I went through a big new wave phase.  I stopped listening to Metallica, Def Leppard, and AC/DC... and started listening to The Cure, New Order, and The Smiths.  But much like the Stray Cats, I just couldn't get into The Thompson Twins.  I knew they were popular and I even liked their hit, Hold Me Now, but I can't say I ever owned one of their albums. 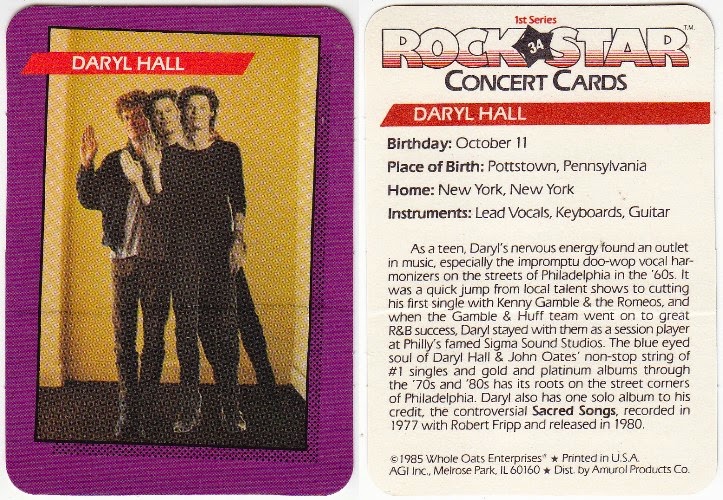 
The final card in the pack contains one half of Hall & Oates, the duo who was recently inducted into The Rock and Roll Hall of Fame.  I'm sure if my mom read this post, she'd be happy with this pull.  She had several of their albums and loved their music, so even though they're not my favorite group... I wouldn't change the station if I heard one of their songs on the radio.


Wrapping things up is the "Hot Rock" sticker: 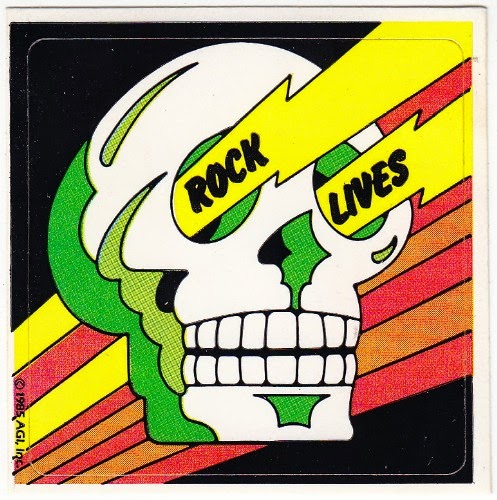 Believe it or not... as cheesy as this might look... I probably would have stuck this on my Pee Chee folder back in the day.

Well that's it for now.  If you're interested in seeing more of these cards, please check out my friend Nick's blog: Dime Boxes.  He recently wrote about these cards that once upon a time... belonged to his father.

That is a cool set. I have the Pat Benatar (I think two of the three that are in the set). Been thinking of looking for the full set myself someday.

Am I the only person who thought "Haulin' Oats" was a weird name for a band? I swear it was years before I realized it was "Hall & Oates".

I never saw these when I was a kid or I probably would've been all over them. At one point I had a bunch of the little Slurpee discs that had rock bands on them (mid-'80s or so), but I had to wait until the fairly awful early '90s Pro Set music cards in order to collect the rockin'-est musicians in trading card form.

I've never seen those Slurpee discs... but they sound awesome.

Some real rock royalty here.
Rudolf is still rocking with the Scorps in 2022. U2 are probably bigger now than they were then. Slim Jim is wildly underrated.