Written by JWillden27 at 11:04 PM
In 2008, Upper Deck came out with an interesting product, fan packs for the Indians, Yankees, and Red Sox (if anyone knows of others please let me know).

The first time I came across this kind of pack was in a repackage product from Wal-Mart.  My wife bought me one on ebay, and the other day I picked this pack up from Target.  In 3 packs, the collation is horrible, the players in this pack were represented in the others as well.
Upper Deck reprinted cards mainly from 2007 and with each set made subtle changes.  I have grouped these cards according to set.
2007 Upper Deck Series 1 and 2: 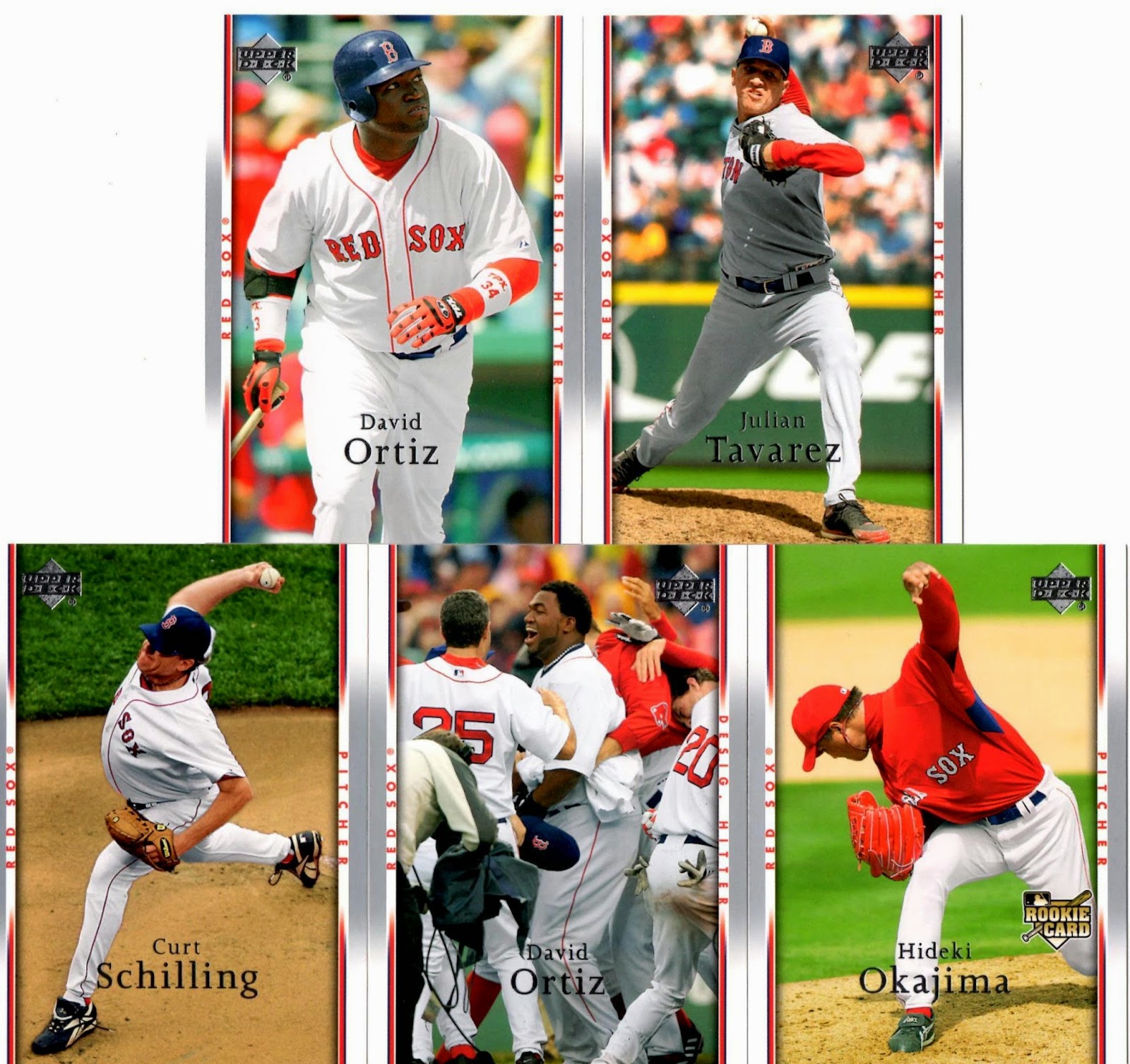 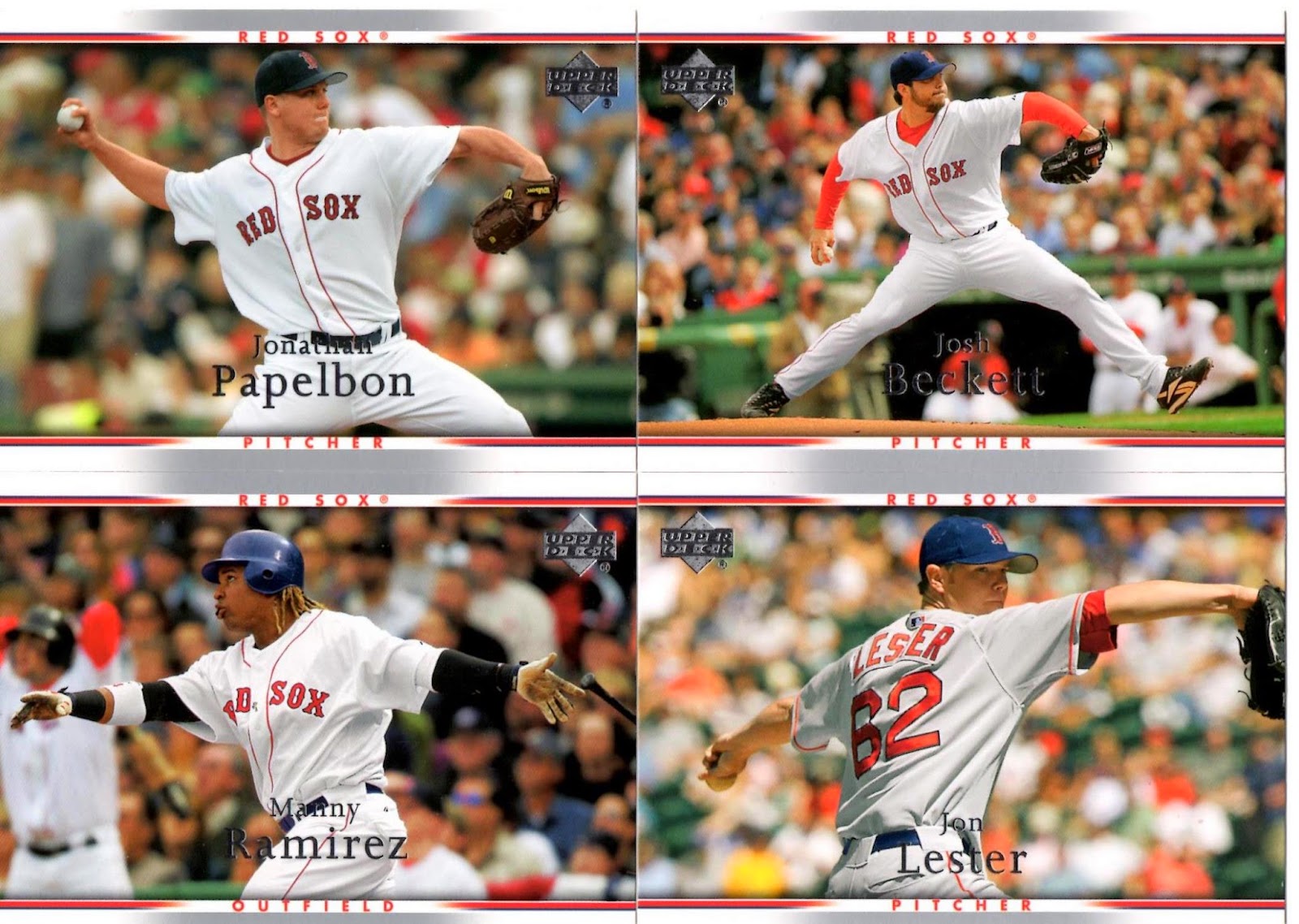 
These nine cards are virtually identical to their 2007 counterparts, except for the fact that the reprints are printed on thinner card stock.
I don't care much for the border.  Why is it only on two sides?
2008 Series 1: 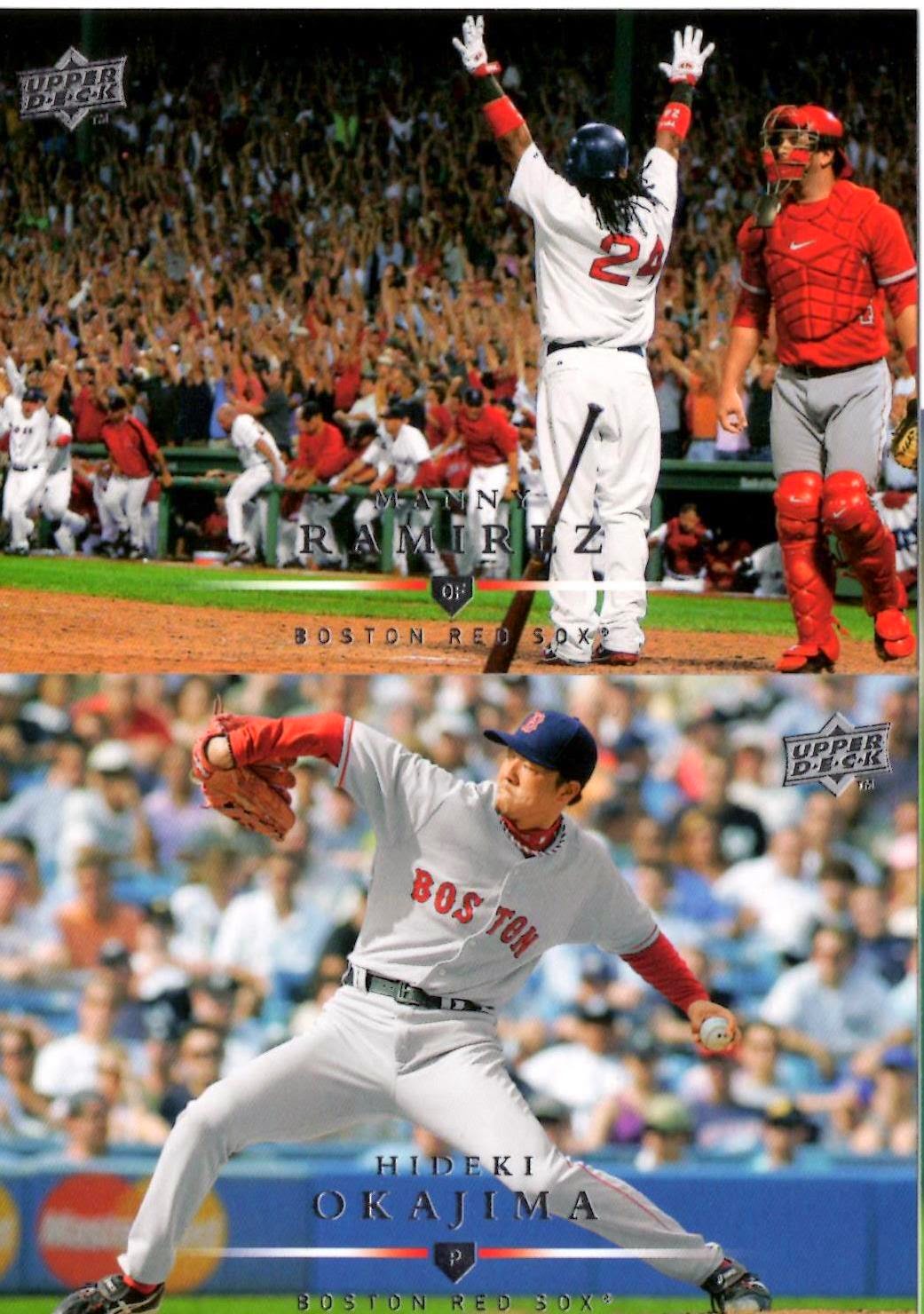 My guess is that this Fan Pack was produced before Series 2 came out, as I have never pulled anything from 2008 other than Series 1.  As much as I have compared these Fan Pack pack cards to the regular 2008 Series 1 cards, I find that there is no difference, except for thinner card stock in the Fan Pack cards.
This may be my favorite Upper Deck flagship set from the 2000's.  The full image, no border cards are great.  I miss these types of cards.
2007 MLB Artifacts: 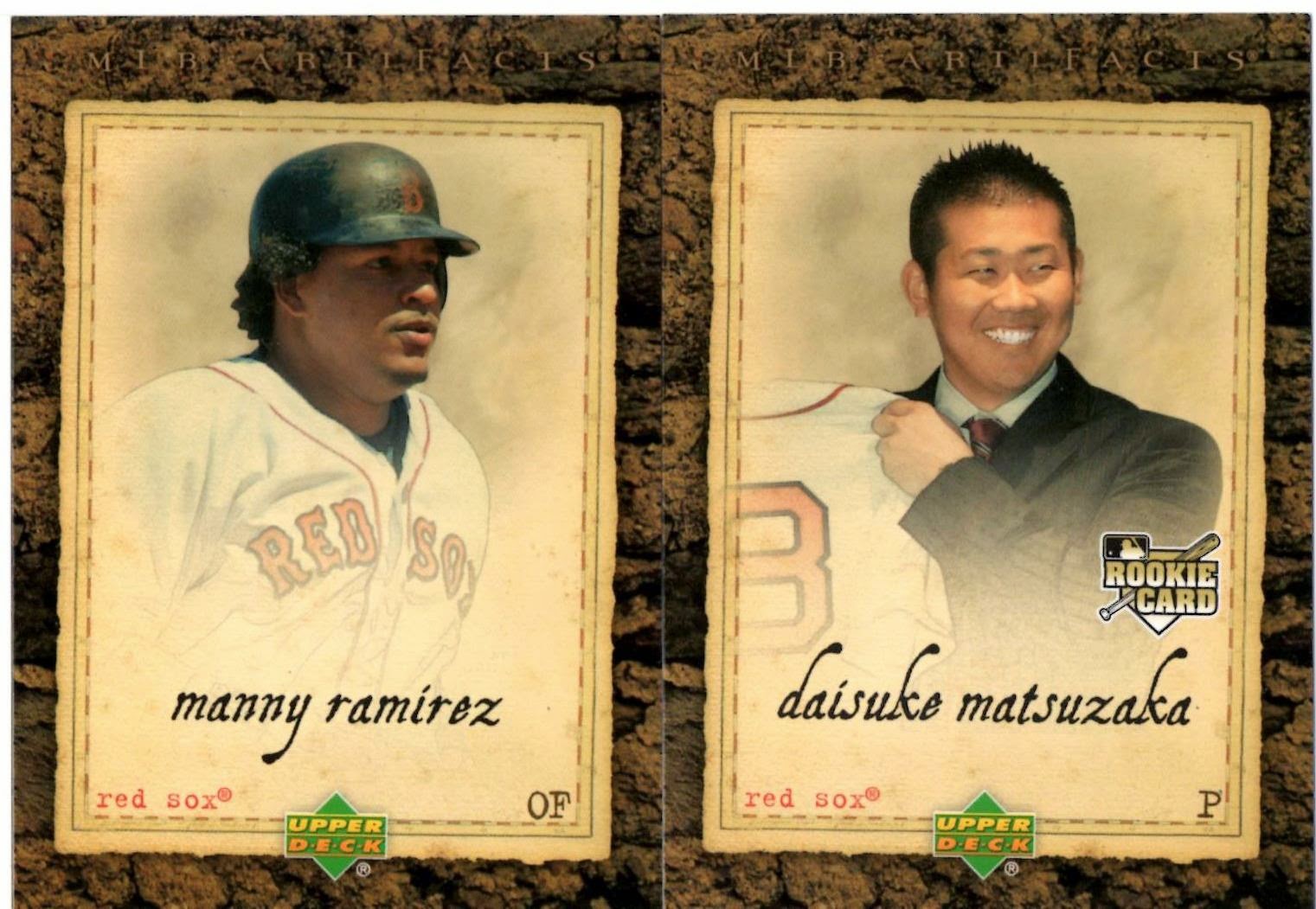 Again, we have cards that are "reprints" with nothing different about them except for thinner card stock. By the way, I loathe the Artifacts set.  Anyone else feel the same way?

Finally, the evidence of reprints can be seen.  With these particular Fan Pack cards, the green in the background is a darker tone and the foil is silver, as opposed to gold on the originals.
This set always confused me.  The term "future stars" should be reserved for rookies and players who have been in the league less than 4-5 years.  Schilling had been playing for 19 years when this card came out.  His future in baseball was less than limited by that point.

There is a variation to these reprints that can be picked up with a keen eye: the foil is silver.  In the regular version of these cards, the foil is gold.
I am conflicted about these cards.  I love the player selection, and it is great to see the great Cy Young as a Red Sox player.  However, the oval portrait style really limits the enjoyment of the card. 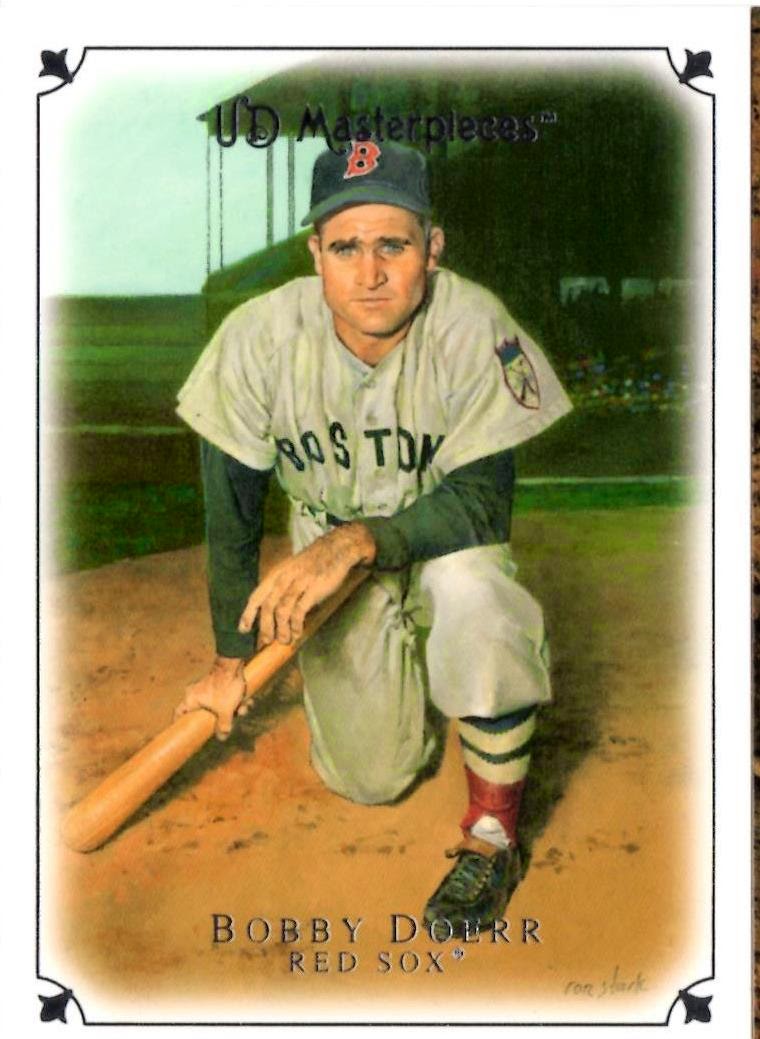 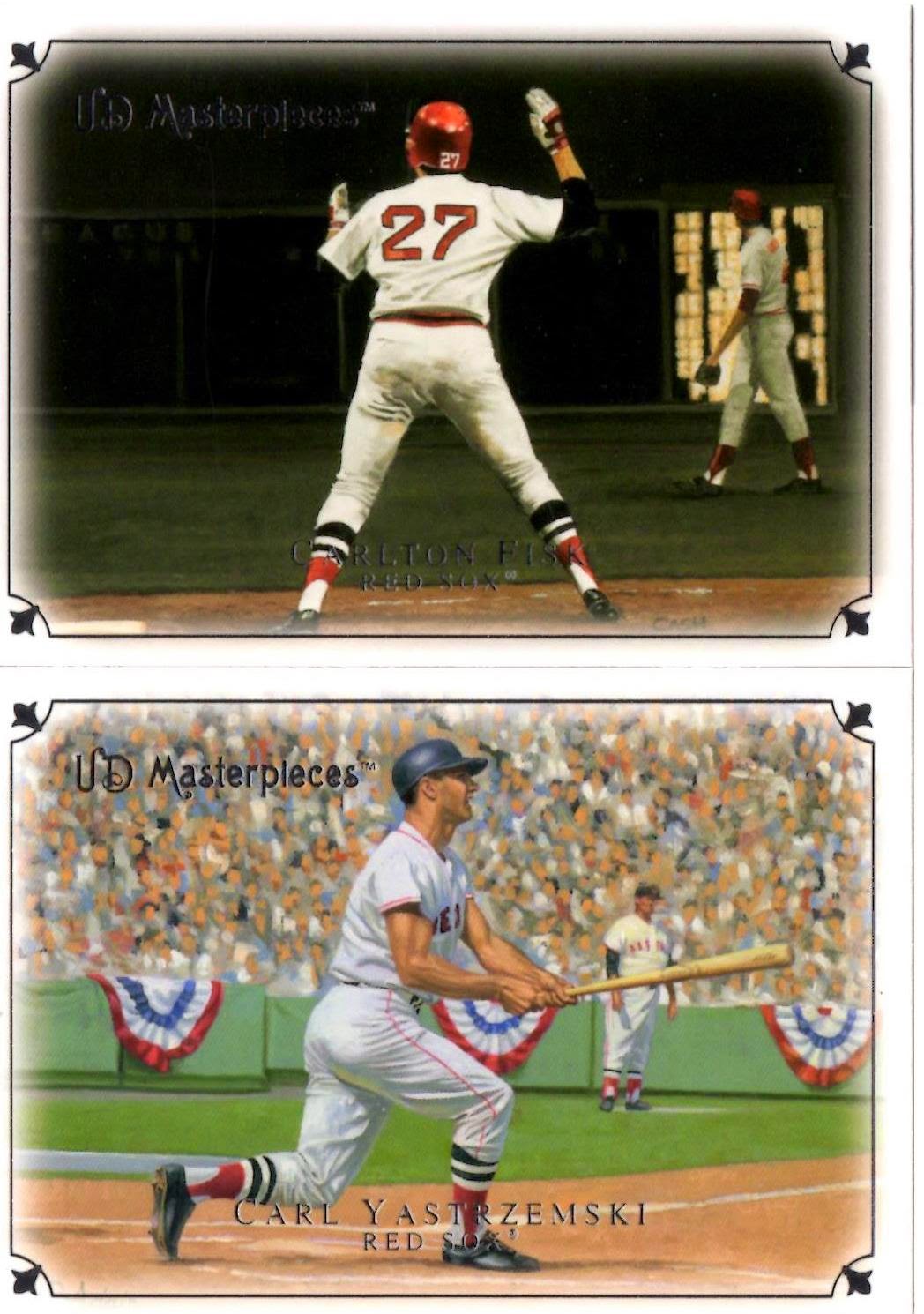 #5, Carlton Fisk
#25, Carl Yastrzemski
These happen to have the biggest difference between the originals and the reprints: the reprints are glossy as opposed to the canvas like cards in the original set.
2007 Upper Deck Masterpieces is one of my favorite all-time base sets.  The image selection is great and the card stock is fantastic.  Buying a hobby box is frustrating, as the hits aren't great and the framed parallels are a nightmare.  The base set, however, is great.