Written by Jafronius at 12:01 AM
Greetings!

Hope everyone's ready for the weekend.  As I type this, the Royals have just locked up Game 3 of the World Series.  I hope it's an entertaining Series and while my heart says Kansas City (because why not?), my brain says San Fran (because somehow I think it's more logical to watch a team develop and take gradual steps to win it all as opposed to a "Cinderella" scenario).  But hey, if KC wins I have no problem with that, because why not?

When I did my anniversary post I noticed that my first sports pack post was uploaded 3 years ago today.  Not only that, but I noticed I uploaded a pack from the same set last year.  Well, I have one more from 2002...from the scan folder, it's a 2002 Topps Series 2 Jumbo Pack! 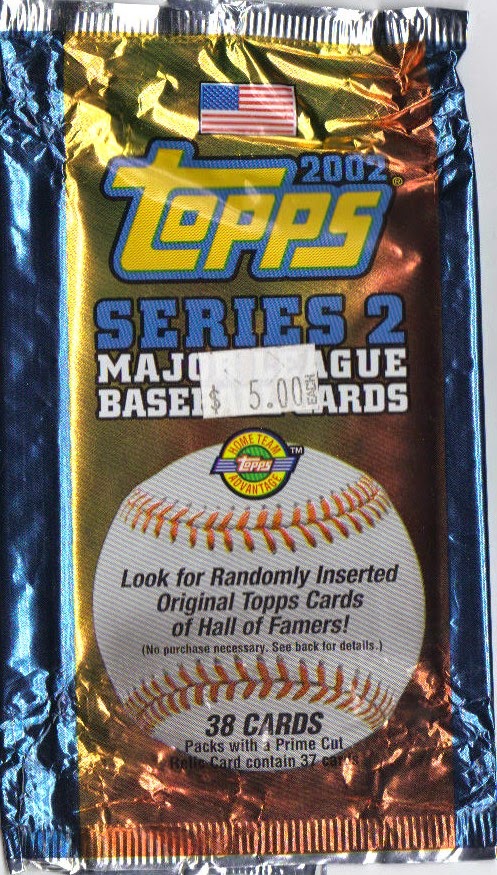 I believe I did pay $5 for the pack, purchased from the LCS near where my parents live.  I figured it was a good deal, since I didn't have many 2002 cards in the collection, and it's 2 more cards than what you get for a $5 Topps rack pack nowadays.  Let's see what I got: 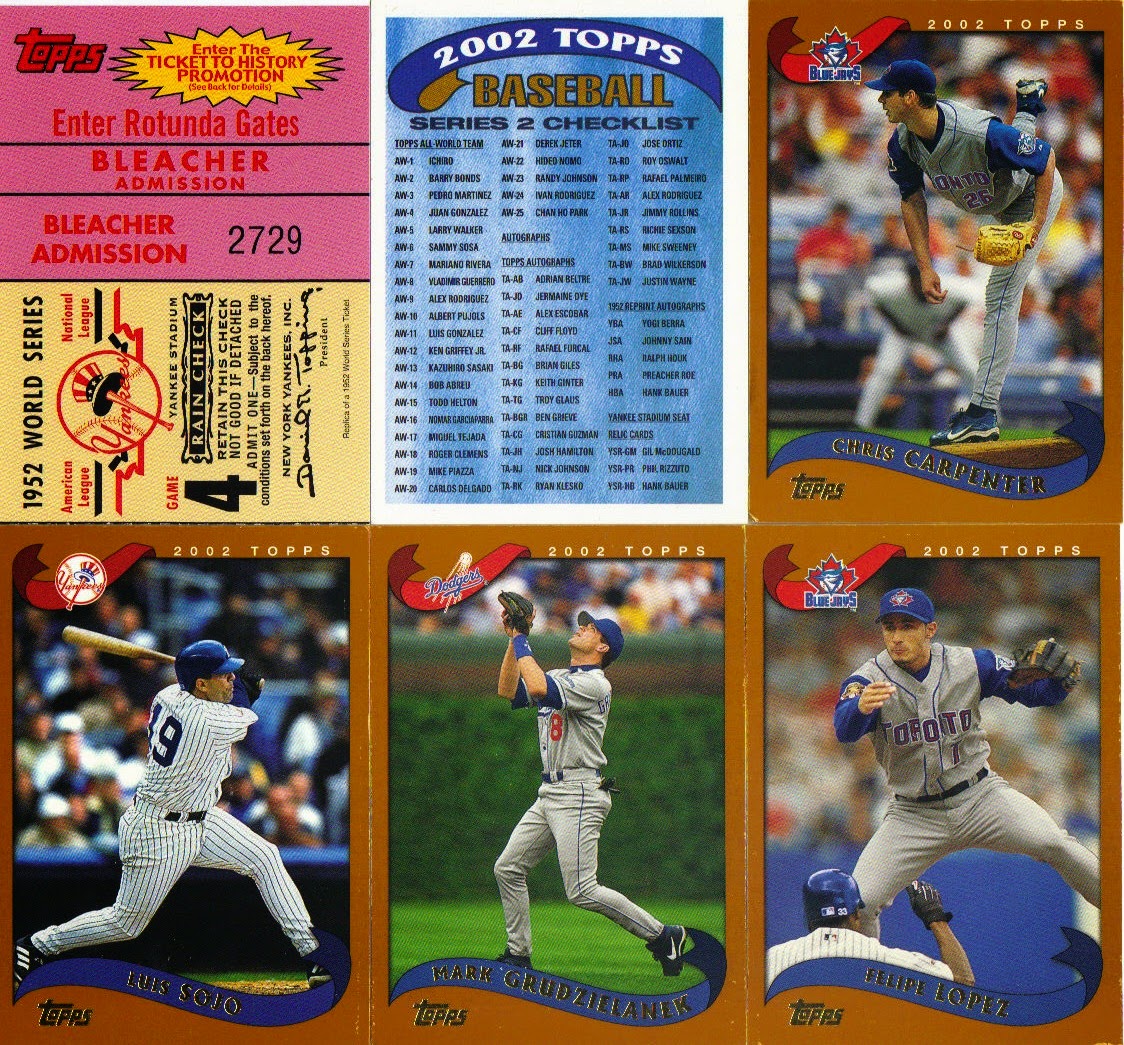 Since this is the third 2002 Topps pack on the site, there's no need to comment on the cards themselves.  I
will give bonus points for the Checklist not counting as part of the 38 cards. 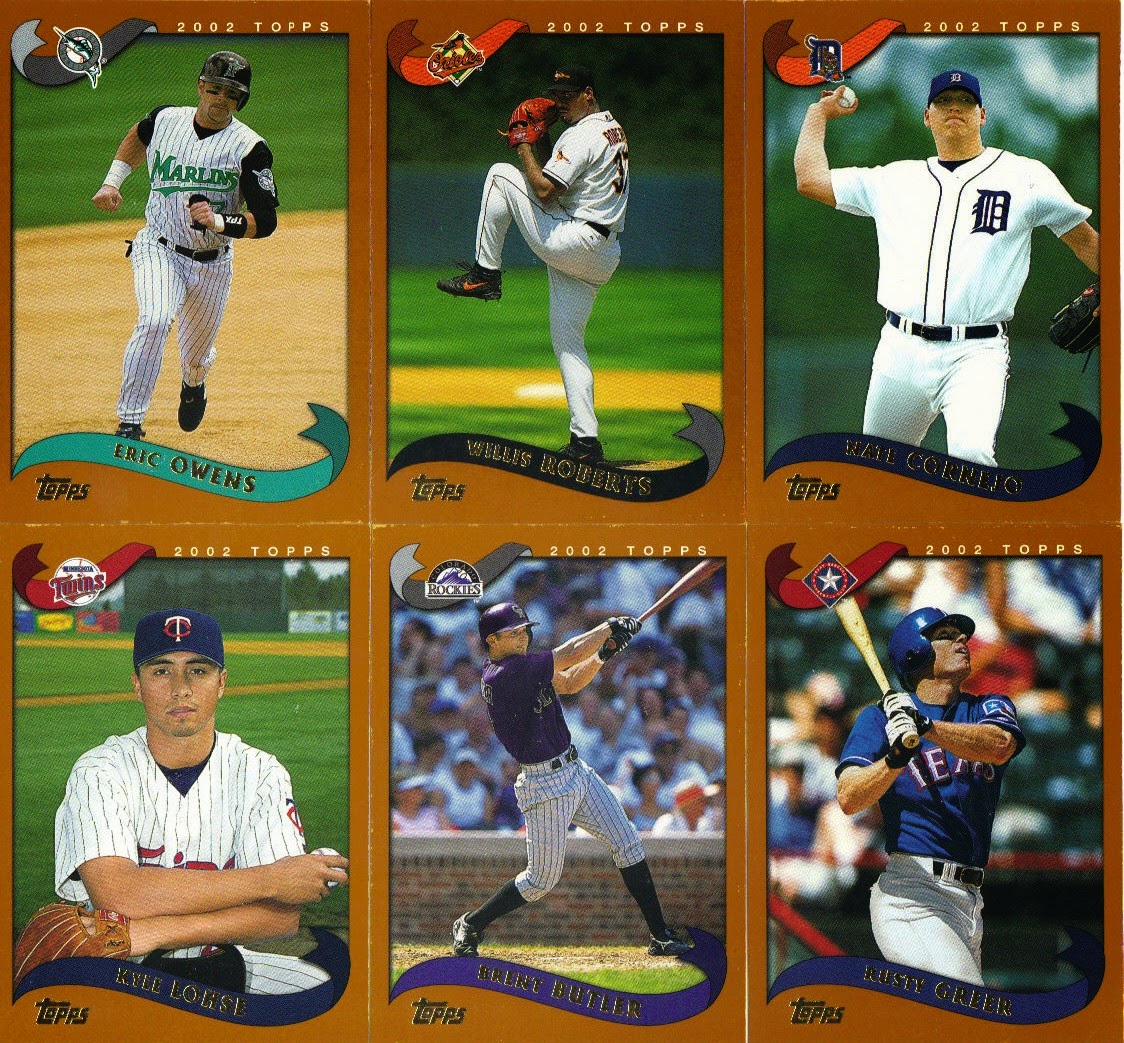 I didn't notice until now that the trusty scanner did not eat up the borders here.  Maybe it's a white border
thing.  Moving on... 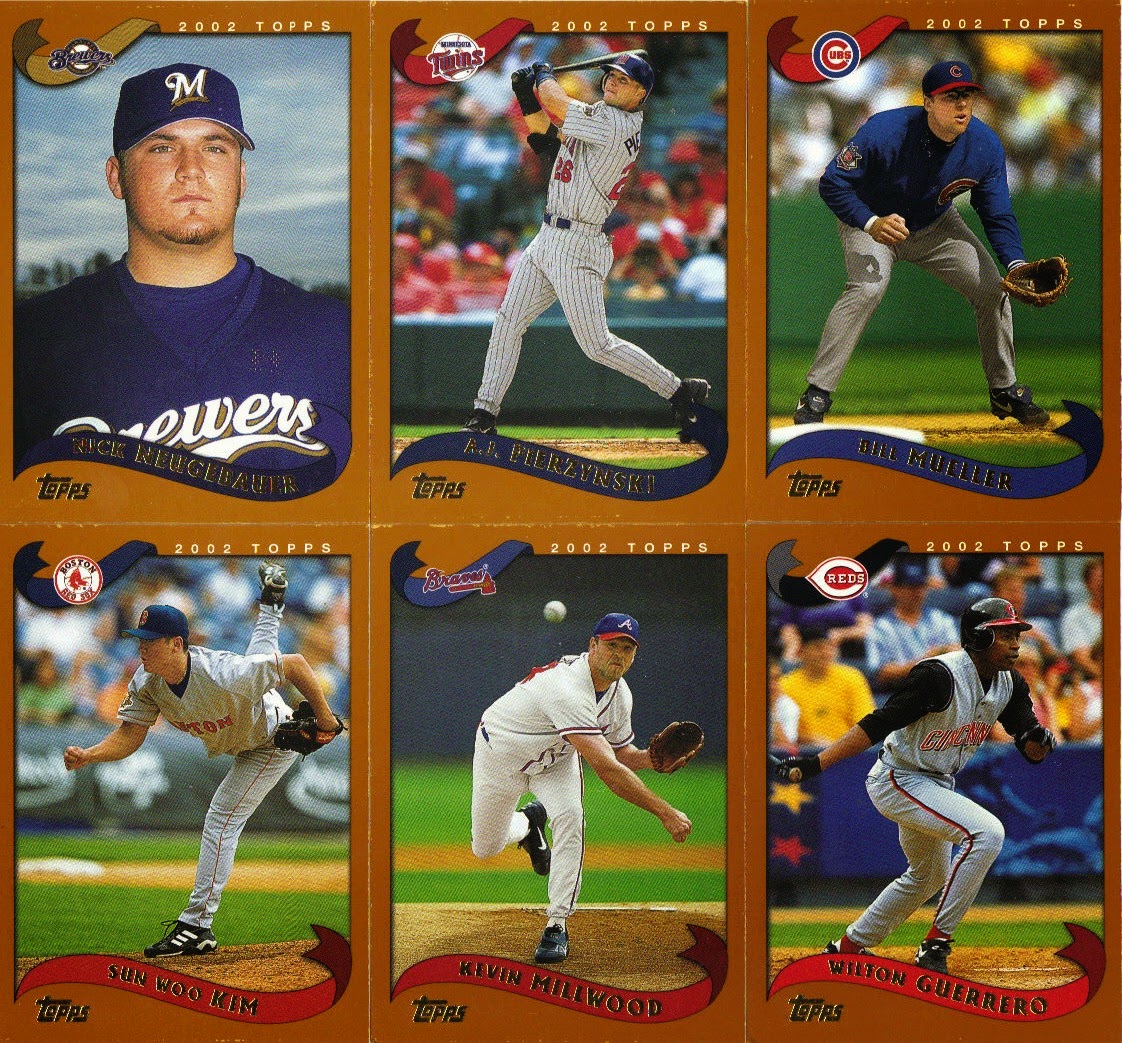 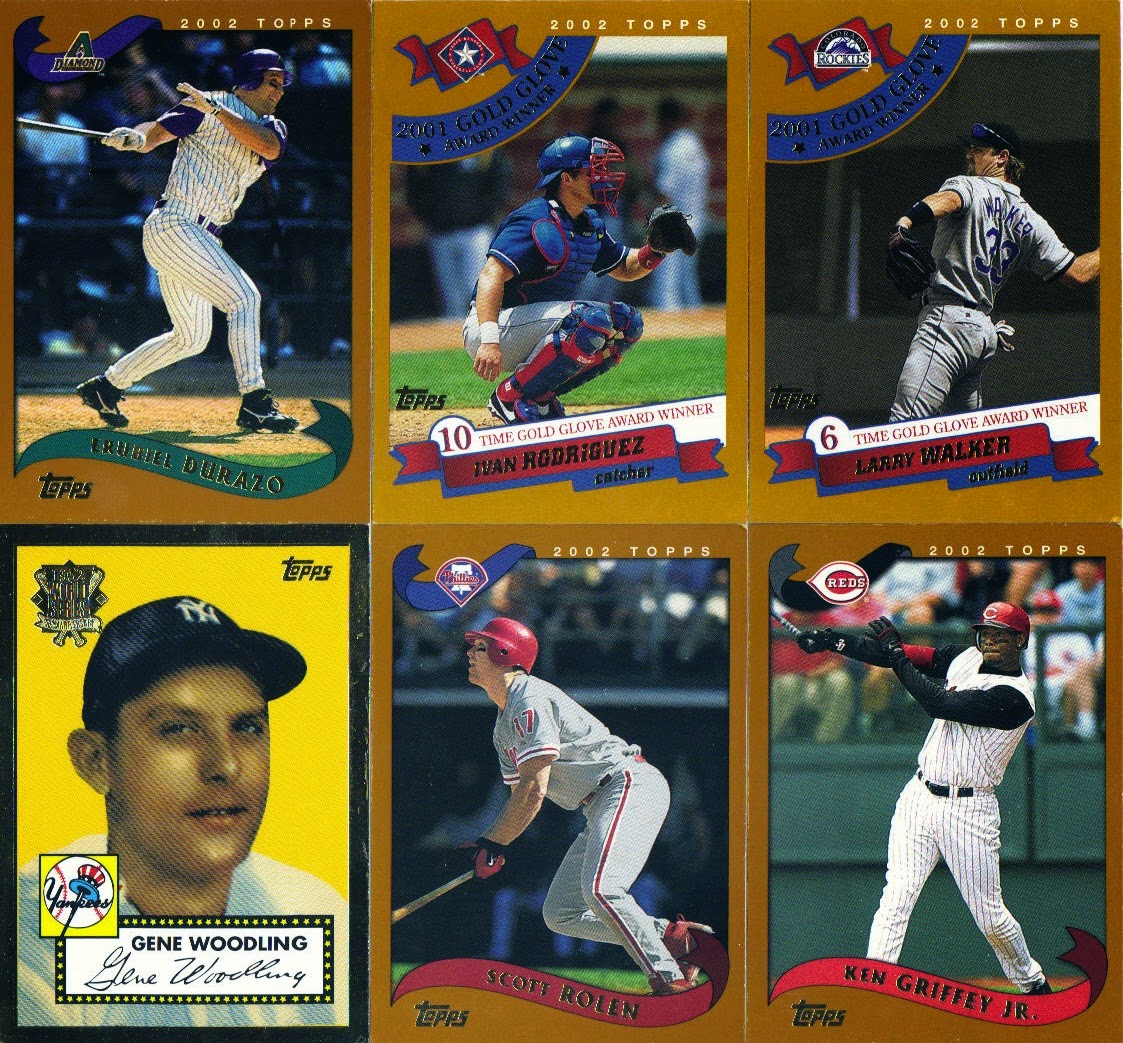 That Woodling is shiny, but not Chrome-shiny.  Airbrush that C from Junior Griffey's helmet and you've got
5 great base cards for one of them Panini sets. The last 11 cards ain't so bad for 2002 standards.  And ignoring A-Rod, more Panini goodness.  I think
that's the problem...Panini's offerings are so tightly cropped, the lack of logos is too obvious. 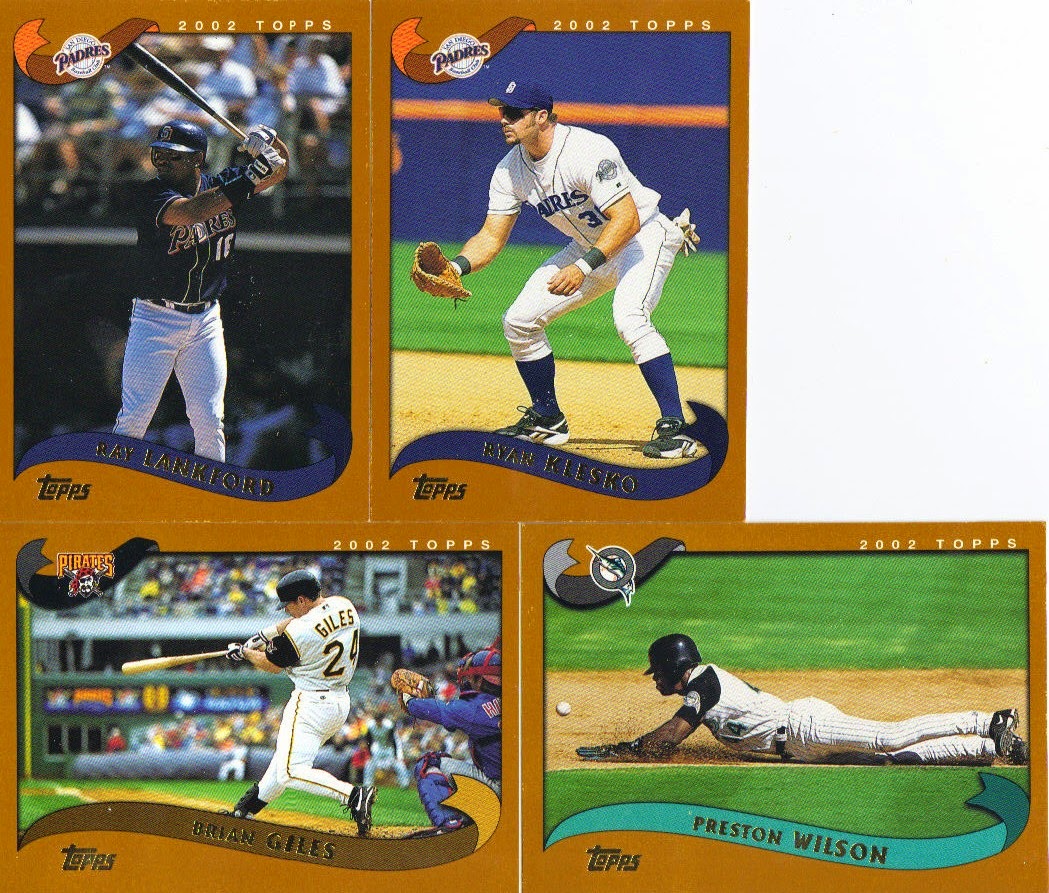 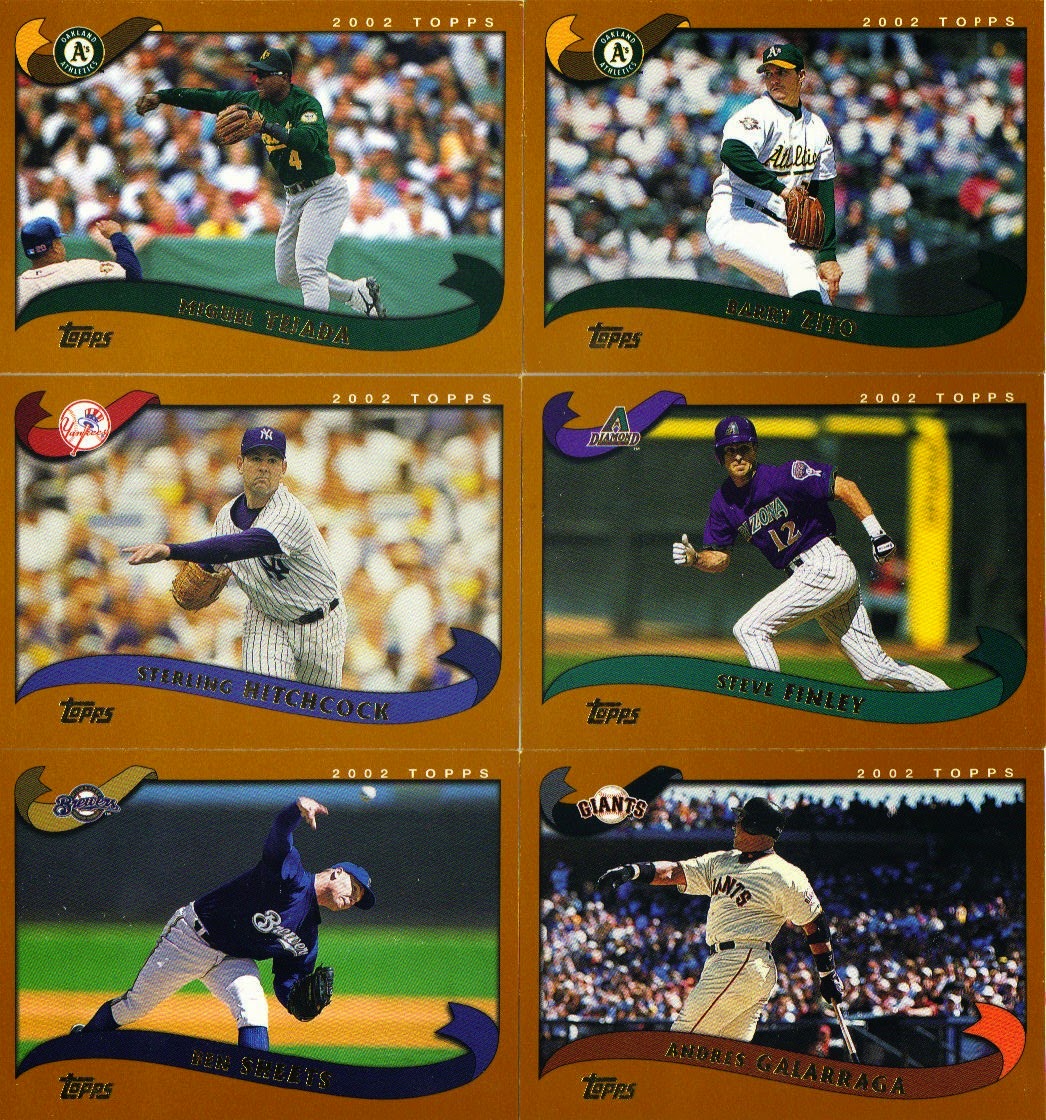 
Oh, it's the horizontal portion of the Jumbo pack.  Nice Big Cat card to end it. 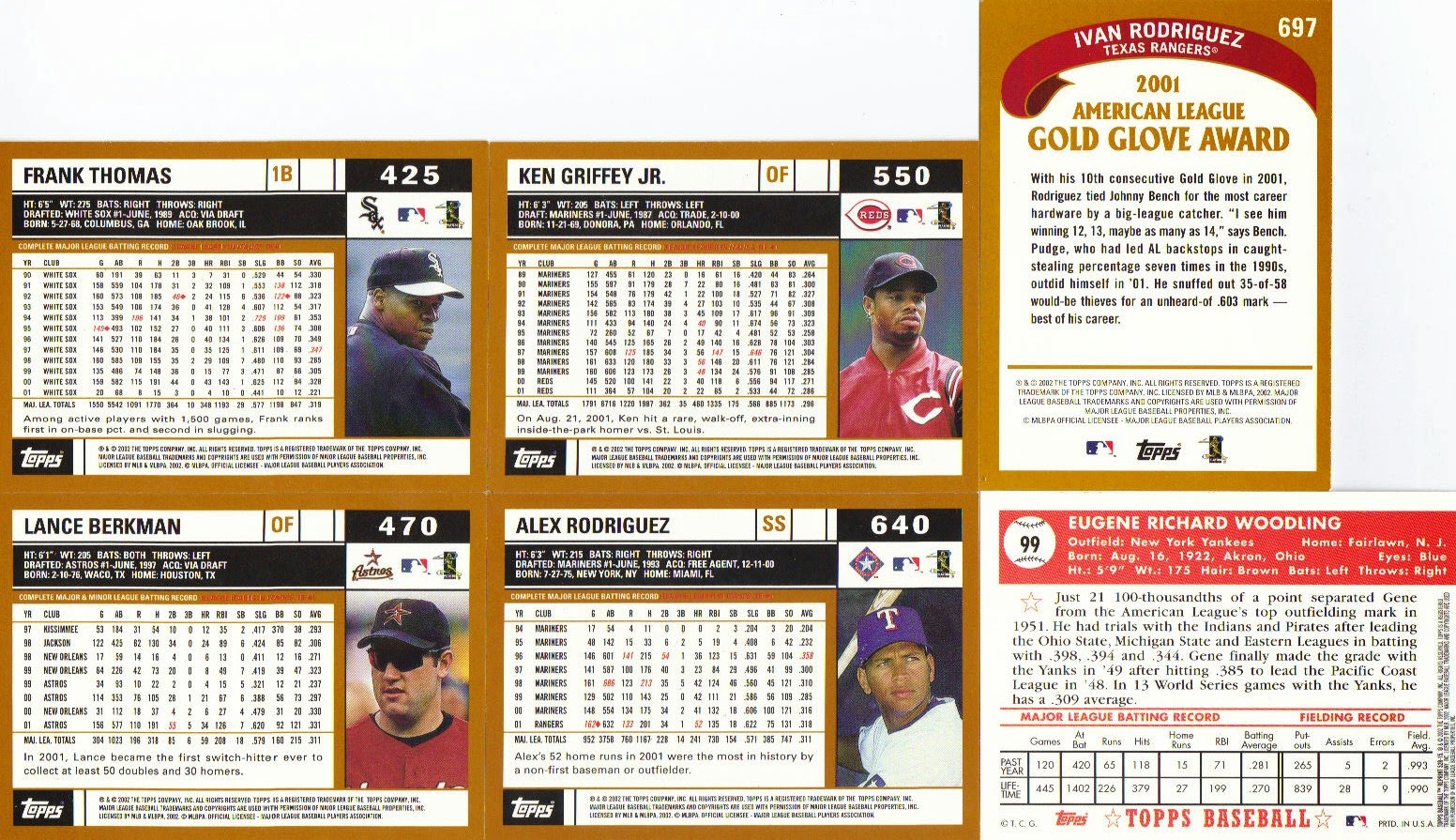 Anyway, that's the pack.  I'm out of 2002 Topps packs, so I have no idea what I'll post next year.  Anyway, enjoy the rest of the World Series...thanks for reading!

It's a shame on that Galarraga. Pull back a bit with the framing, bring the catcher into the card and it would be gorgeous. Right now, it's just a tiny player on a polkadot background.

Sadly, I still need that Chris Carpenter card for my collection.

Interesting at how slim A-Rod looks in this card must have the infliction that Barry Bonds had!