The quest for the Cup begins today with four games. I am not sure if I get more excited with Spring Training or NHL camps. But I am glad it's back, because baseball in Chicago was no fun, football sucks (Cutler will NEVER lead a team to the SB), and basketball doesn't thrill me. Let's get another folder posted. Another release we won't be seeing this year is Panini's Titanium. 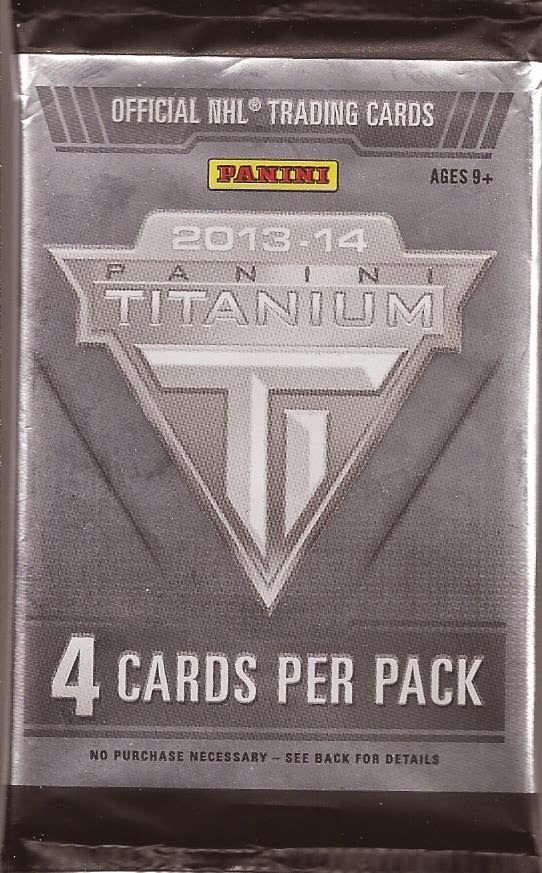 Titanuim is another hit per pack product, but this was released only in Canadian stores, or could be ordered thru the Panini website. My LCS bought a couple boxes to sell, so I grabbed a pack. With a name like Titanium, I think the pack is a perfect reflection - alllllllll silver-y. Only 4 cards in a pack. What's my hit? 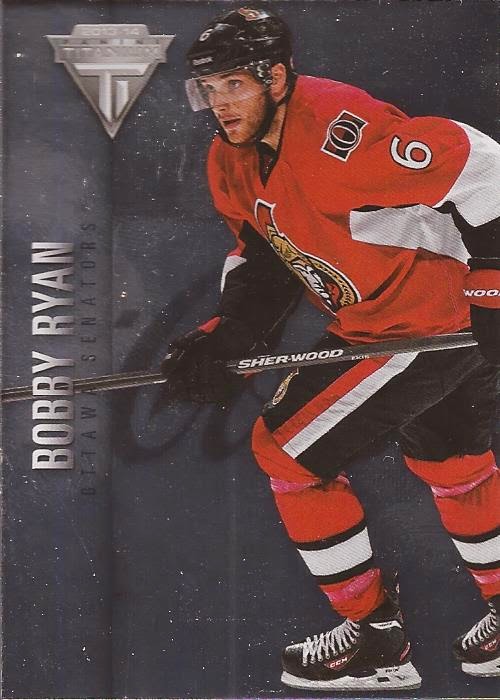 Think of Upper Deck Black Diamond, and lose the hashing. You have Titanium. Not a lot to the design. Simple is nice, but the premise, and the silver washed out background. Not the best. And even though this card may be framed ok on the design (see that line running north to south from the Titanium logo), because of the coloring, this is horribly unbalanced. 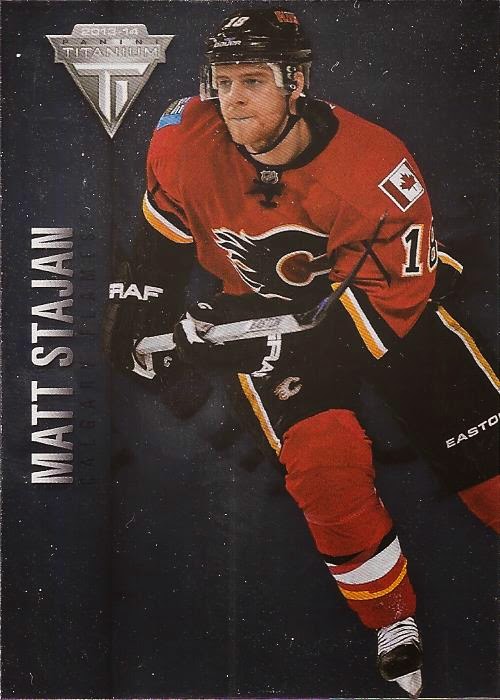 Better job on this one. The name is nice, as since the card is mostly foil, the name is easy to read. Team name underneath that??? Not so much. 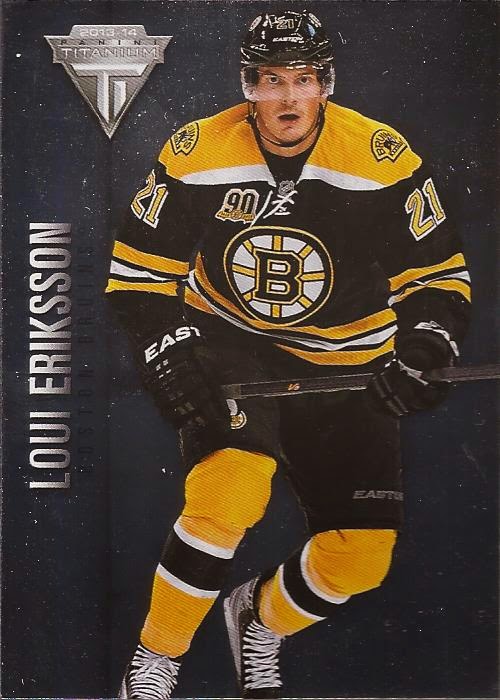 The web says the rookies make this a popular set. Funny, I didn't pull a base of any rookies. That's ok. With the silver background, this look nice. But not nice enough to purchase more packs, considering the price. The backs... 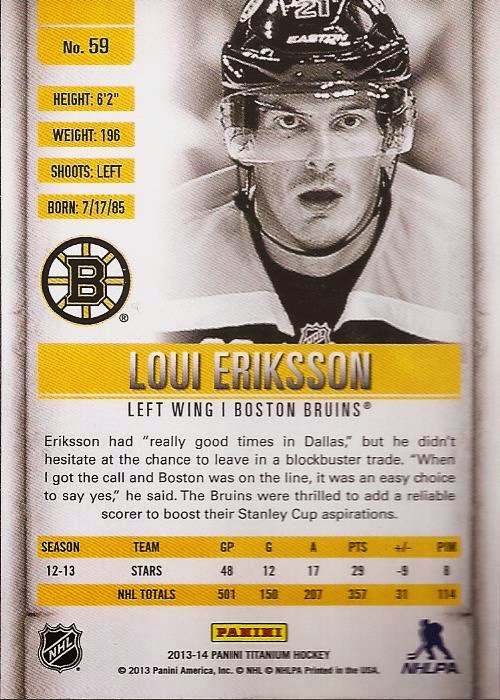 Slightly different layout than other Panini releases. But same recycled photo and one year of stats. My guaranteed hit? 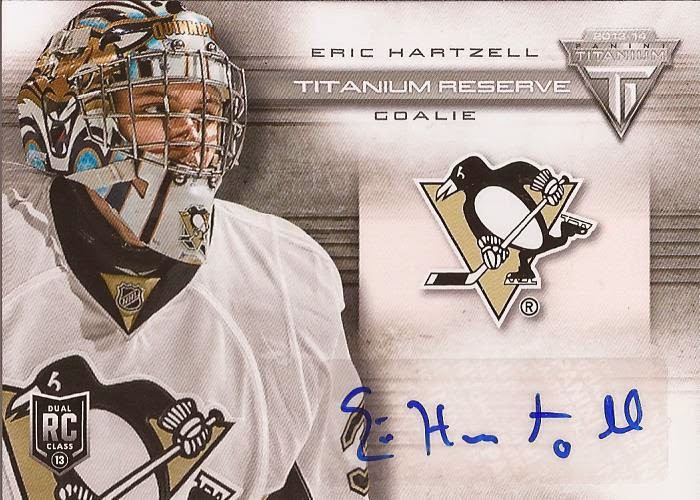 Sticker auto of a rookie goalie for the Pens. Ok - I complained about the lack of a rookie too soon. Not sure how much play he will get with Flurey in goal, but let's hope he comes up soon. Here's a rarity on APTBNL - let's see the back of this card. 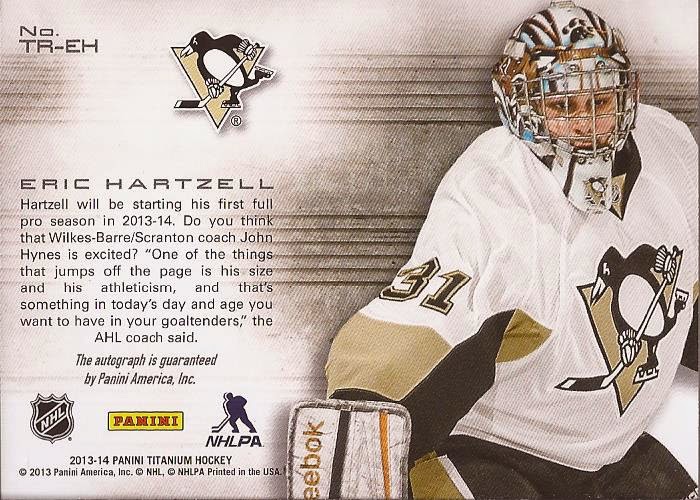 HOLY CRAP!!! It's a different photo. Things that make you go....

Nice Pens card Jeff! I would be interested in trading for it next time we deal :)

It's not so much that Hartzell has Fleury in the way, but that he has Fleury, Thomas Greiss, Jeff Zatkoff, and Peter Mannino in the way.