Written by Jafronius at 10:44 PM
Greetings!

Hope everyone is enjoying their weekend.  How about those baseball playoffs?  Personally, I thought the Royals were just a feel good story and they would be promptly dispatched by the Angels.  Now they are very legit up 2-0 on the Orioles...very entertaining.

Anyway, 3 years ago today I made my first post here at APTBNL.  Somehow, the collective blogdom have yet to kick me out, and for that I am grateful.  So, continuing the sci-fi theme of my anniversary posts, here's a pack of 2010 Topps Star Wars - The Clone Wars:  Rise Of The Bounty Hunters! 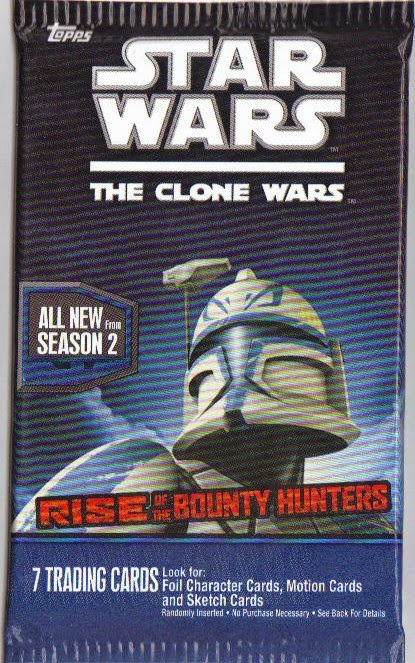 A search on the interwebs reveals that this is a 90 card set with 4 cards devoted to an episode of the Second Season.  If anyone wants to see a checklist, go here.  Also, you can see what all the cards look like here.  So, what did I get?

The Clone Wars ran for 5 seasons on Cartoon Network, then was cancelled when the Mouse bought Lucasfilm.  A sixth and final season aired on Netflix back in March, which tied up all the loose ends.  The series took place between Star Wars Episode II: Attack of the Clones and Star Wars Episode III: Revenge of the Sith.  Here are the backs of the first three cards:

Since 4 cards are used for each episode, it appears two cards provide an episode recap, one is for episode trivia, and the other card is for the "opening crawl", which is actually spoken by the narrator in the opening minutes of each episode.  Sometimes the "opening crawl" contains a moral, replacing "A long time ago in a galaxy far, far away...." in the movies, and that appears on the episode recap card. 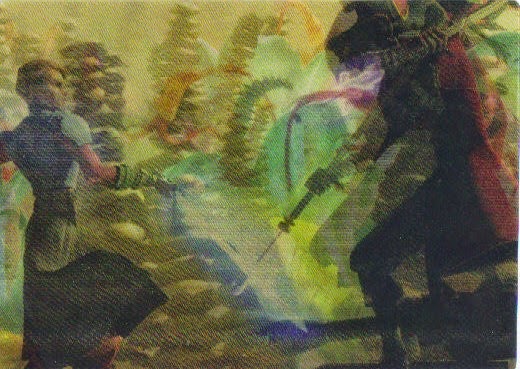 There are 5 Motion Cards in the set, and they come 1 in 6 packs.  As with all cards of this type, the scanner makes it less cool than it actually is...who doesn't like motion cards?

And since I showed the backs of the first three...

Anyway, that's the pack.  It's certainly been fun writing up these occasional posts for you all, and it's not like I'm low on material, so I'll be sticking around.  Until next time...thanks for reading!

Email ThisBlogThis!Share to TwitterShare to FacebookShare to Pinterest
Labels: 2010 Topps Star Wars - The Clone Wars: Rise Of The Bounty Hunters