Written by cynicalbuddha at 3:30 AM
It's election day.  I won't badger you to get out and vote. Either you have, will, or won't. But to celebrate our civil responsibility lets go back 22 years to the first election I ever voted in.  I was 18 in 1992. Had graduated high school that spring and started college that fall.  The 1992 Presidential election was an interesting point in history and for the first time a third party candidate had a shot.  Of course Perot ruined any chance he had by pulling out early from the race and then jumping back in.

I found a box of this Wild Card Decision '92 at Don's here in Anchorage and couldn't pass it up as I've started a new collecting emphasis on History.  And for 5 bucks for the box why not.

You get 8 cards per pack and there's the Ross Perot special subset.  Oh I hope I get one or two!

100 cards to the set. I should be able to put at least one complete set together. 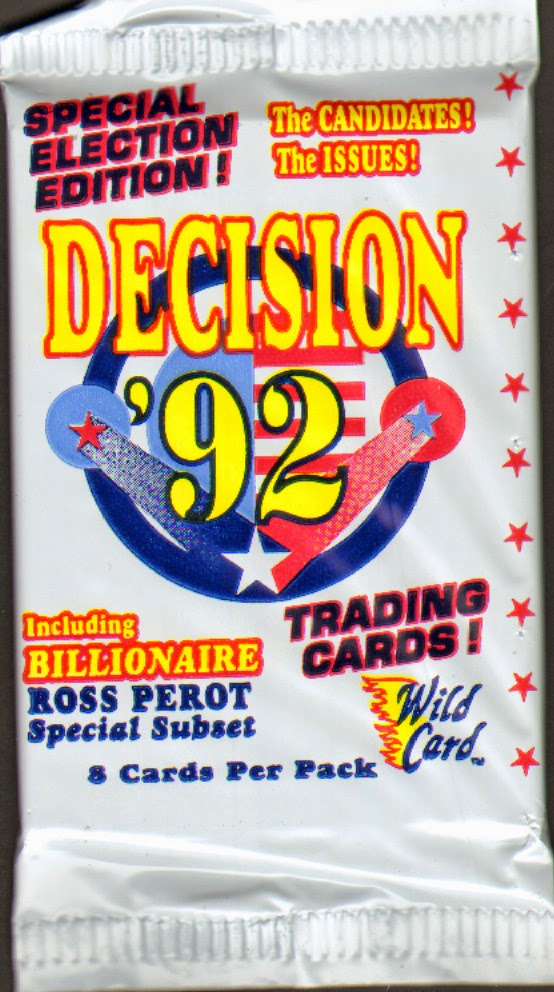 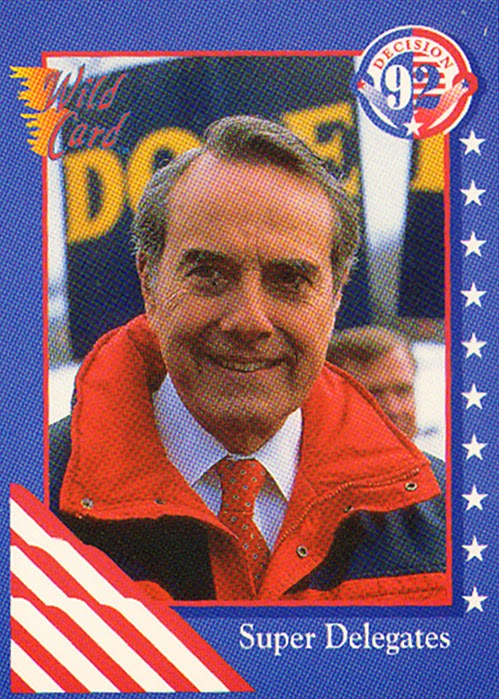 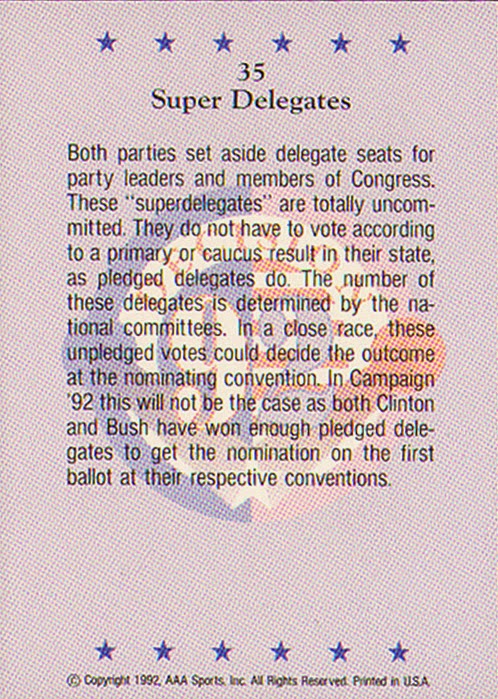 I find it interesting I not only got the Pro Life card, but also the Pro Choice. 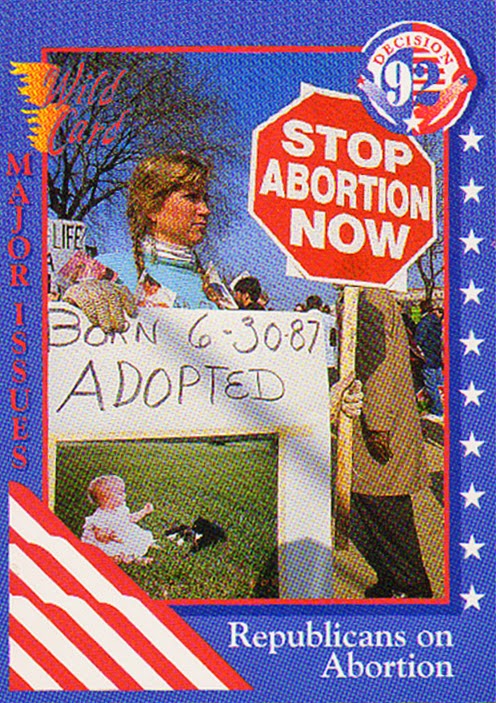 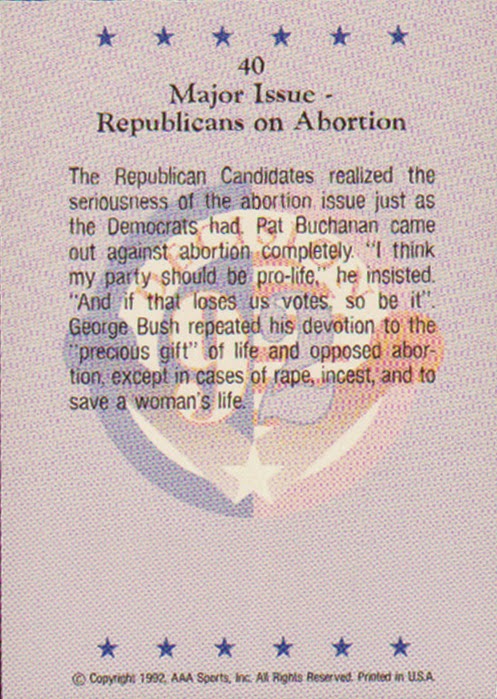 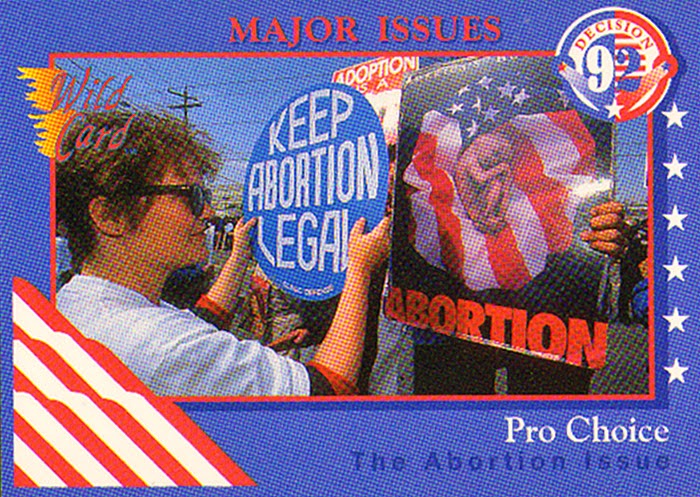 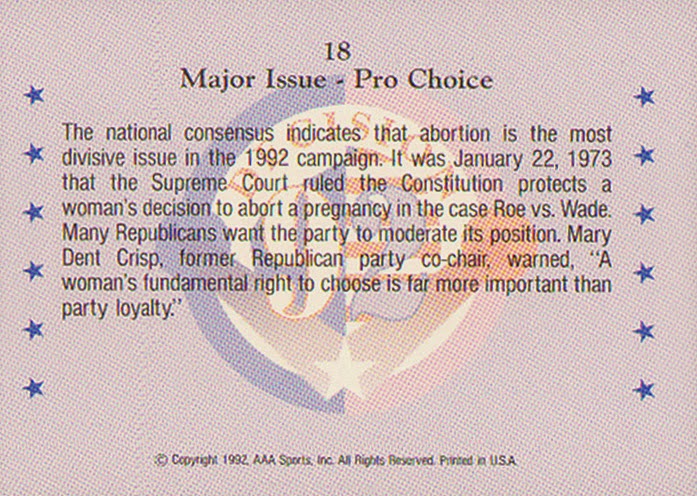 Pat Buchanan would later take over Perot's Reform Party and pretty much run it into the ground. 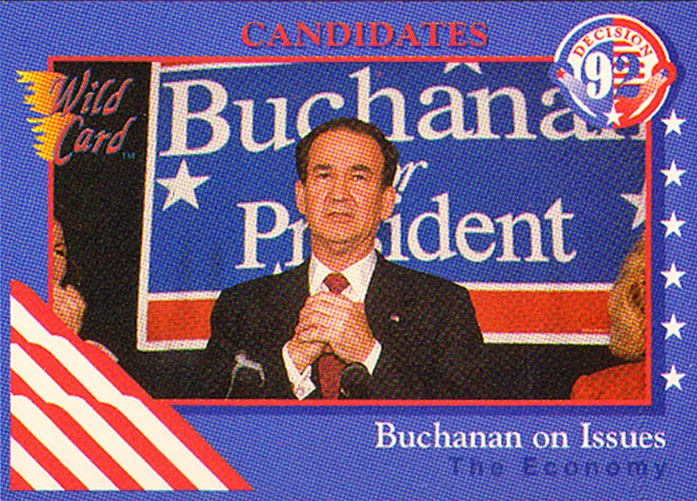 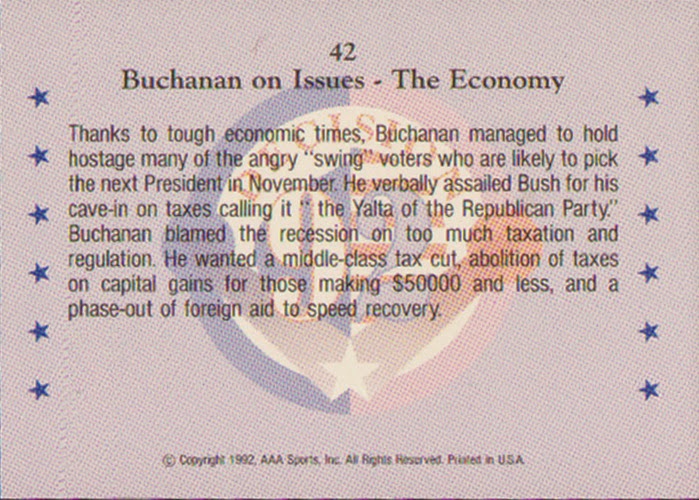 Ross Perot, the everyman billionaire with his you know everyman hovercraft. 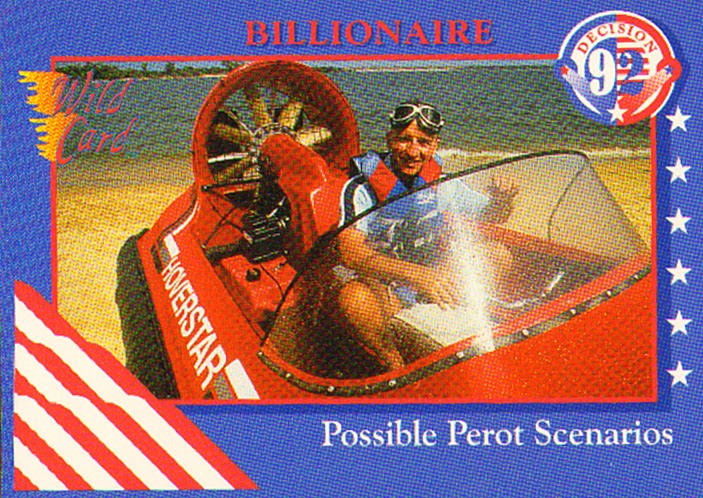 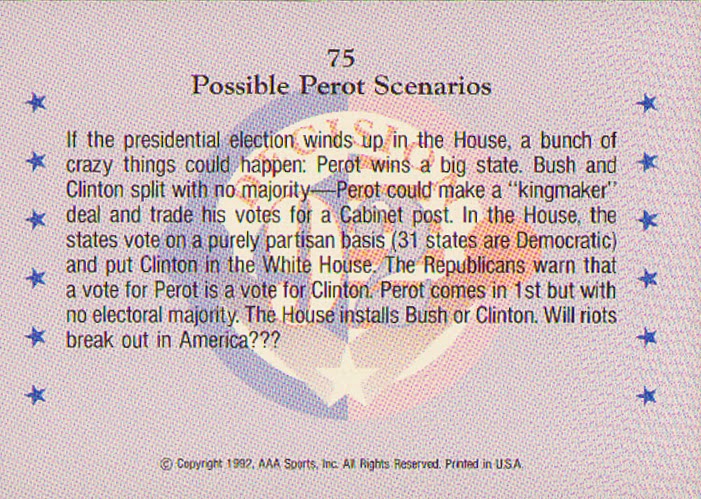 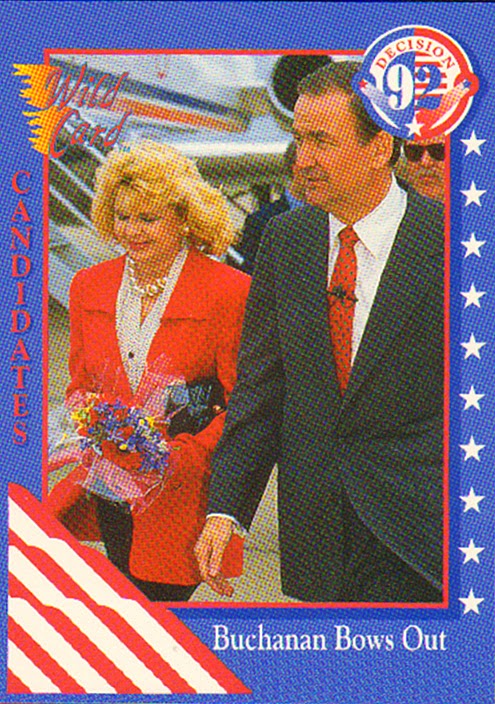 It would be the last we saw of Buchanan. 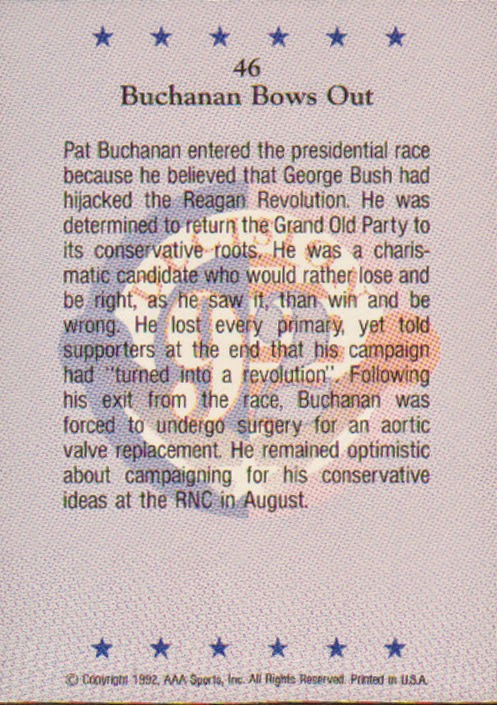 You'll notice I only posted 7 cards.  That's because I got two of this next card.  Now I have worries about a complete set.  Looks like collation sucks.  At least I didn't get a triple.  Anyone remember Rodney King.  Sublime has a song about him, well not so much him, but the riots his beating inspired. 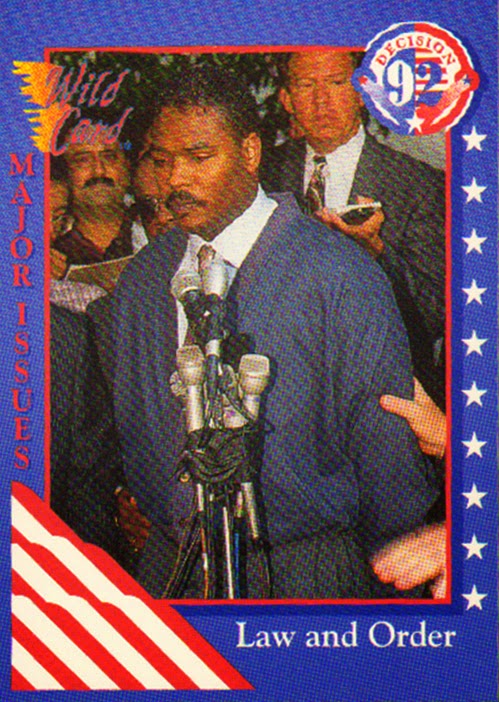 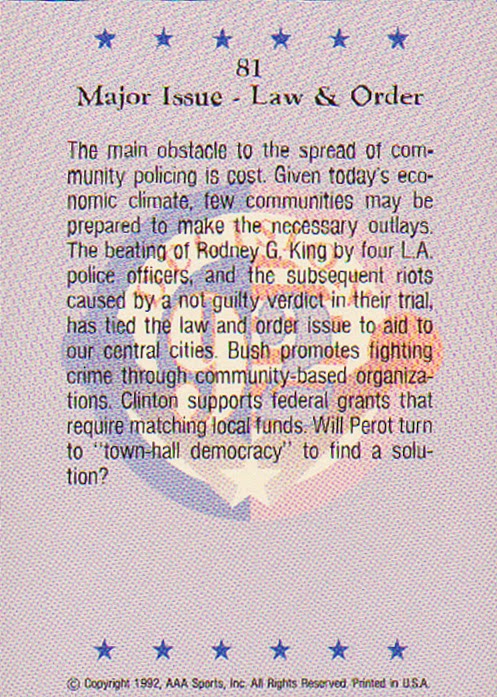 Did you know that Ross is still alive.  Yep. 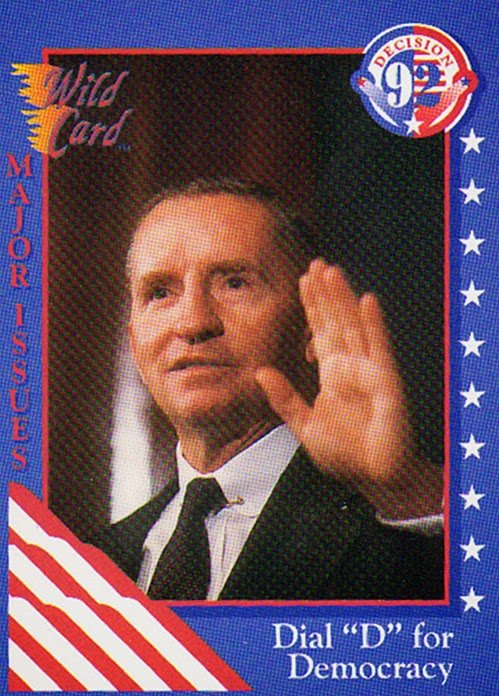 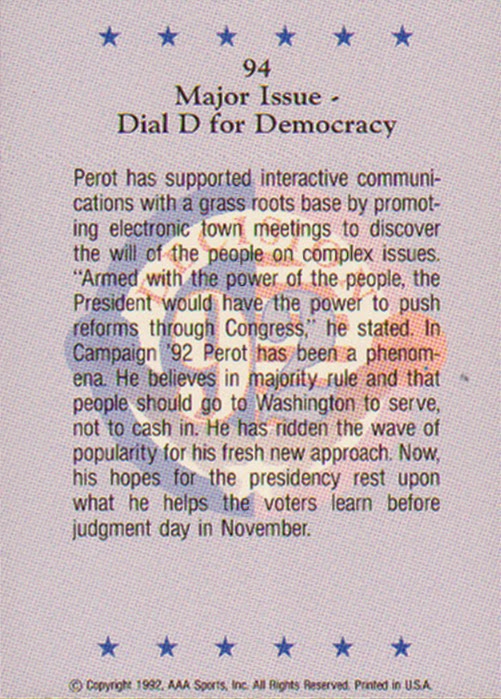 Oh and look what I got.  For those of us that remember ripping packs of Wild Card.  The gimmick was the numbered stripe cards.  Supposidly you could send a numbered striped card in for a equal number of that cards base cards.  I'm not sure if anyone ever took Wild Cards up on it as the striped inserts were in theory worth X amount more than the base.

I ended up pulling a Olive Stone with the 100 stripe!  I don't remember what happened to AAA Sports the company that put these out, but I'm sure I'm a couple decades removed from being able to trade this in. 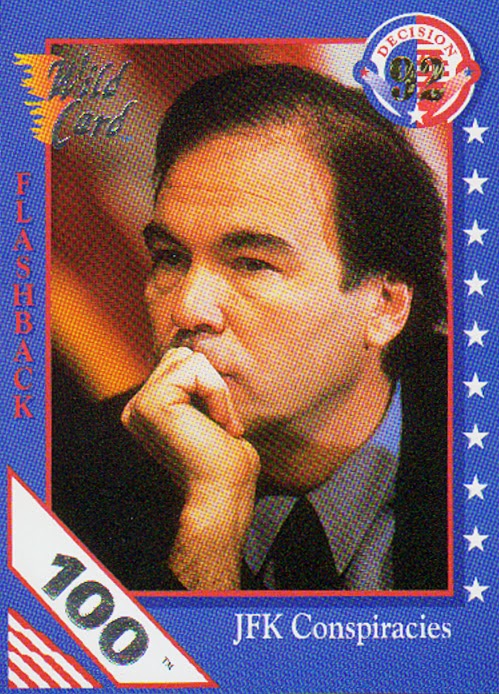 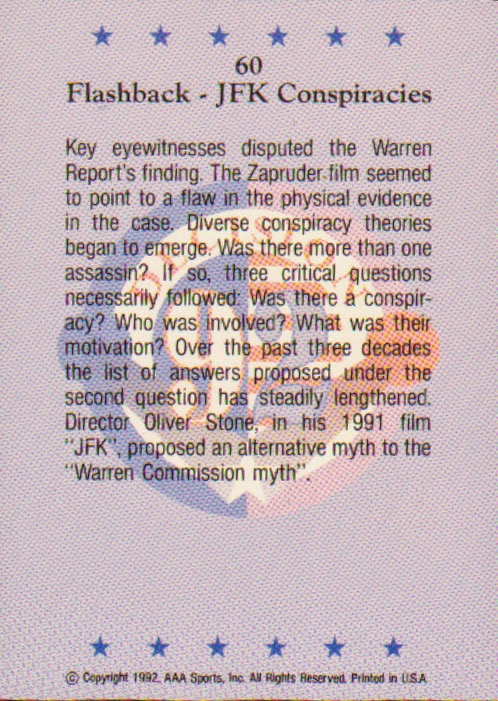 This is great. I don't remember this set at all, but I remember (briefly) the Wild Card college hoops and football sets.

I've never seen this set. Please tell me you have some leftovers from this set. I can't trade to help finish your set (obviously), but I'd totally love to find something that will get me a few from this set, if you have 'em. My email is still jcm731@gmail.com