Written by Twitch at 5:43 AM
Hey gang!  Now that the Stanley Cup and NBA Finals are over (Congrats to the Chicago Blackhawks on officially putting themselves in the dynasty discussion with their San Francisco Giants-esque third title in six years and also to the the Golden State Warriors on their first championship since the year my dad graduated high school!), and the actual, official start of summer is right around the corner, and there's nothing but baseball happening for the next 2-3 months, depending on the level of cynicism clouding your view of preseason fartball, how do you feel about breaking up the monotony with a whole mess of packs featuring cards of gorgeous, barely famous women wearing almost nothing?

I'll take your bored, distracted indifference as a positive sign. :)

Anyway, at the end of May, I put some eBay sale funds towards a couple relatively cheap boxes, DC Women of Legend (I'll do a post with a few packs of that over the summer too), and the subject of today's post, a monster repack-ish behemoth of 2014 BenchWarmer Eclectic, which promises 8 hits, as well as 60(!) packs of older product from factory sealed boxes.

BenchWarmer, if you aren't aware, is kind of like your Maxim/FHM/etc magazines, without all the bad writing and general dudebro-ness.  It's just the pretty ladies wearing not much, with some vague sports and card themes and tropes thrown in there for funsies.  At least during the era we're looking at.  Like what usually happens when Leaf comes a-calling, it quickly jumped the rails into almost exclusive high end tomfoolery and completely fell off my radar for the past couple years.  But I digress...

As the title indicates, today we'll be posting the loose, Eclectic-specific single items, which, aside from the jumbo laying on top, were just in a team bag nestled snugly amongst the endless sea of old packs.  Before we finally, mercifully get to that though, I have prepared a a rundown of the older packs I have set aside for future postings you'll be seeing over the coming weeks.  So get ready, because the "BenchWarmer Summer of Sexy 2015"/"How much mileage can Lonestarr get out of one box of cards?" starts now!

So after this, there will be another baker's dozen of beautiful breaks featuring nearly half of the packs in the box to share!  My box was consistent with other breaks I saw on Youtube landing 3-7 extra hits in the 60 older packs (I hit four), so there will be a little extra incentive beyond the excessive amount of obscenely beautiful women to look forward to, if you even needed it.  With that all tediously said, here's the promised stuff that comes in every box of BenchWarmer Eclectic! 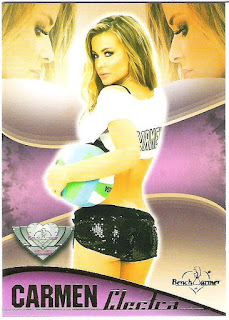 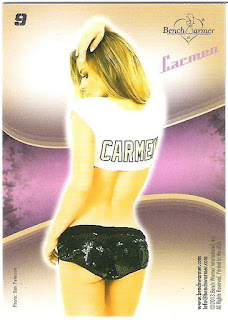 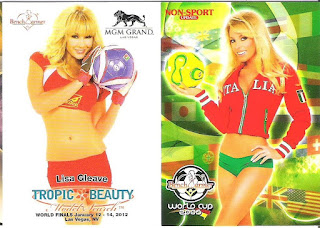 Gleave is a keeper. 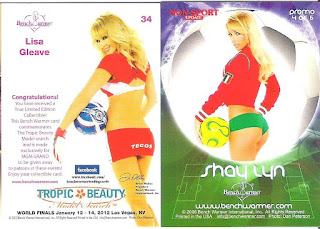 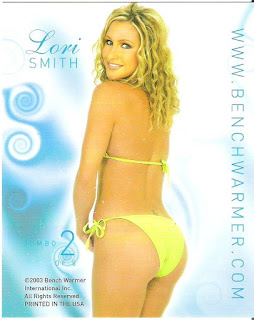 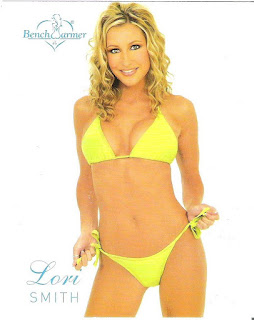 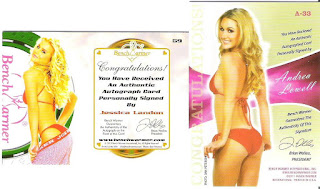 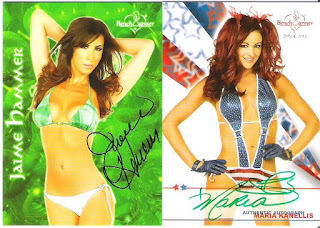 I can definitely keep these two, because I actually know who they are! 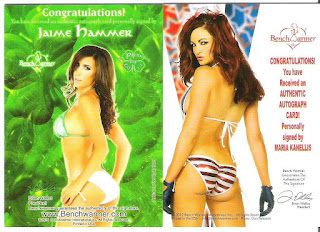 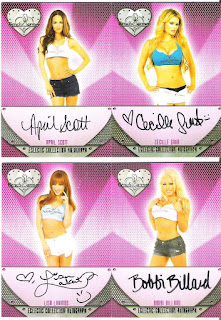 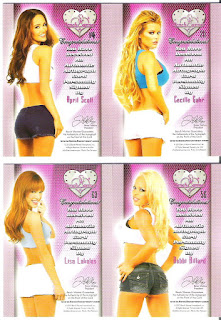 I just now realized there was an extra auto in there.  Don't remember if that was the standard in all the box breaks I watched or not.  Some had a #'ed parallel auto on top though, which this did not. 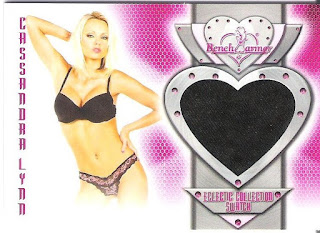 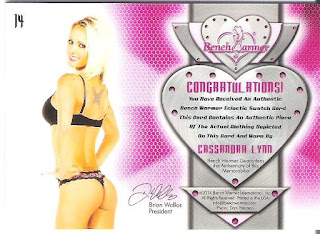 And there ye have it.  No crazy hits or #'ed stuff or Brooke Morales, but I'm still pretty pleased with the box.  Lots of content, lots of hits.  Would definitely recommend if you can find it for $40 or less.  The commemorative autos were easily the best of the bunch for me, and they and the Lisa Gleave promo are the only things I'm intent on keeping.  Everything else is available, so hit me up if you see something you like.  Here's to more posts soon.  Seeya!

sent you an e-mail about the relic.

This is going to be an interesting summer.....

This set should just be called "Butts"