Written by Twitch at 9:18 AM
We'll get back to the ladies in a bit, but first I have this pack I grabbed at Target the other night.  It... It's not that interesting.  But it is a pack of something that isn't here yet, so I might as well post it.  Someone can post a better one later.  Anyway, here goes... 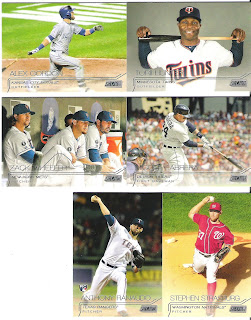 The first thing you notice immediately about these cards is just how incredibly crisp the photography is.  Even with a so-so (for this set) loadout of photos in this pack, they all still look amazing. 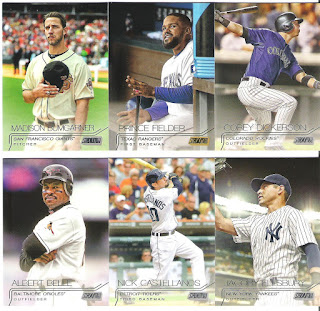 Other things of note about that these cards: I remember Sooz saying the flimsiness was one of the complaints they addressed from the 2014 set.  And indeed, these are slightly thicker, & noticeably sturdier feeling, than your average loose pack of retail cards.  So mission accomplished there.

The other thing (aside from how much I despise the cropping job on what was almost an amazing Jacoby Ellsbury card) is that the foil works way, way better in the scans than it does in real life.  Never thought I'd be able to say real life doesn't do the scans justice, but I guess there's a first time for everything. 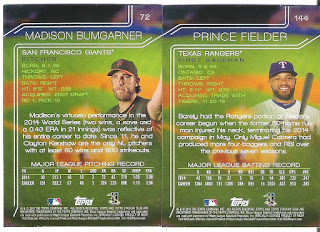 And here the backs of the two I'm keeping to make sketch cards out of.  Nice & colorful.  I dig it.  Everything else is available (especially Ellsbury).


BONUS!
I actually did draw the above cards (I guess the base will be available for trade as soon as I color everything then), plus one more.  So here are those three works-in-progress are now.
Until our next...

I could use any base cards you're not keeping!

Those drawings are impressive!