Written by JediJeff at 5:55 PM
I'm on a roll, and I have to be considering the stack of packs I have. So hitting Ramdom yet again, we get the last pack of the scan folder. The moment I head about this set, I wanted it. Picked up one box, and I hope to get a 2nd soon enough to finish the set. But as a pseudo Browncoat, I am as hooked on Firefly as anyone who has watched the short lived series. And if you haven't, it's on Netflix - what are waiting for? 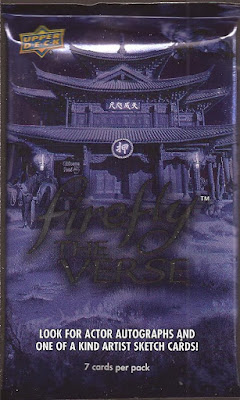 If you are familiar with Star Wars Galaxy or many of the other sets with scenes hand drawn for the cards, then you will get the idea of The 'Verse. As I mentioned, I ripped an entire box. From that you are guaranteed two autograph cards and a manu patch. Plus you have the standard printing plates, 1/1 sketch cards and the like. Let's see the best pack. 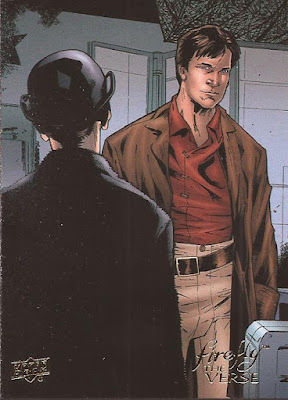 You have multiple artists working the set, which means you will see different styles of art work. UD foil logo and 'Verse foil. Otherwise, the image is the star. Here, Mal is trying to work on a deal with a shady character named Badger on some supplies they scavenged. 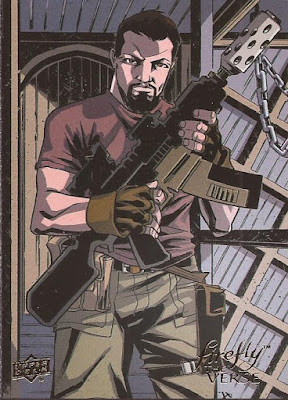 Ahhh - Jayne with Vera. This is from an episode with Jayne trying to trade his favorite gun for a woman Mal has named Saffron, played by a young Christina Hendricks. 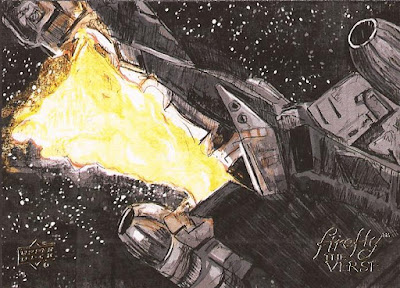 So for those that don't know, the Firefly series is only 14 episodes long. The checklist for the 'Verse puts the set at 171 cards. The 14 shows take up the first 126 cards. If you want to do the math, that means each episode has 9 cards. Yup - Upper Deck nailed this set for storing in a binder with each episode filling one page. Why can't everyone be this forward thinking? 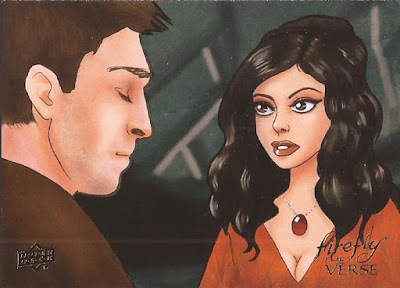 Mal with Inara. Inara is a Companion - basically, a professional "woman", but they are highly respected in the 'Verse. It's through Mal's complicated relationship with Inara that the Serenity gets a lot of passage to ports. BTW, Inara was played by the super talented  Morena Baccarin who has starred in many recent movies including being Deadpool's girlfriend. 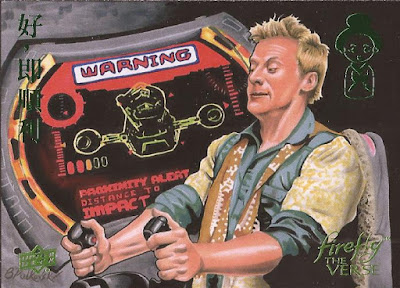 Wash. Best pilot in the galaxy and a fantastic wise ass. Married to Zoe, Mal's 2nd in command. No one pilots a Serenity class ship better. Or understands the mantra "only the strongest survive". Alan Tudyk is soon to join the Star Wars universe in the upcoming Rogue One. Oh yeah - this is a foil parallel, as you see in the green foil and the extra foil image in the upper corner. Foils fall one per pack and the image will change. It's not always a cutesy Oriental type doll. 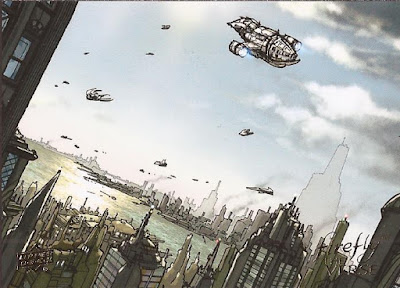 I think the joy of Firefly, along with the fantastic writing of Josh Whedon, is the fact that the place seems normal. Much like the joy of Star Wars in that this isn't the future but another place. And there is dirt and grime and living in it. Everything is not perfect. 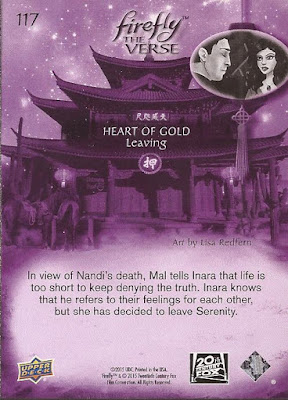 Quick look at the back. They are different colors for each episode. You can see the small B&W image of the front of the card in the upper right. 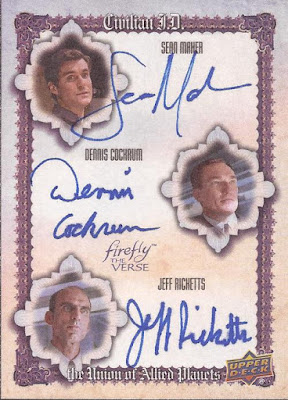 Triple auto, all on card! Sean is Dr Simon Tam, brother to River Tam, who is a very special girl, that the other two autographs on this card are attempting to recapture after Simon spent serious money to bust her free. Two by two/Hands of blue. The auto cards have a nice matte paper finish to them. Just beautiful.

I would LOVE to build a master set. Maybe, in a year, I'll start working on the other autographs in the set and see what I can put together. But all in all, I love this set and will get another box. Maybe two, if it makes it to a Black Friday sale in November.

Email ThisBlogThis!Share to TwitterShare to FacebookShare to Pinterest
Labels: Firefly: The Verse

I'm still pissed they killed Wash off in the movie. What were your other hits?

Since the movie was made mostly for an audience that had never seen the show, I personally don't consider it part of the canon. Therefor in my mind, Wash is still alive!

As for the cards themselves, I have to admit that I don't really care for the overall design. That being said, I really like the autographs in this set and probably will try to collect as many as I can.

My other hits were an auto of Franc Ross (Monty):

And the manupatch was of Jayne's t-shirt logo:

I watched the first episode on Netflix, but couldn't get into it. Maybe I'll give it another shot.