Written by LongFlyBall at 5:18 PM
Today was not supposed to be a day of participation for me. Today was for vicarious living and spectating. A winning scratch-lottery ticket changed that. I had money to burn and so off to the hobby store I went. Fresh out of the box is this; 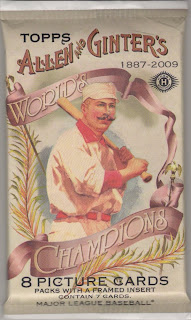 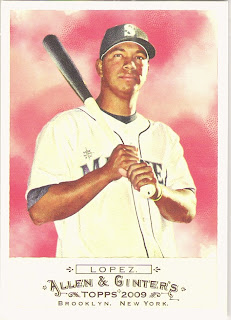 The pack quickly turns towards mound magicians and pretty much stays there now. Next up we have another Mariner in the left-handed Erik Bedard and all six-foot-three of the Giants' Matt Cain. 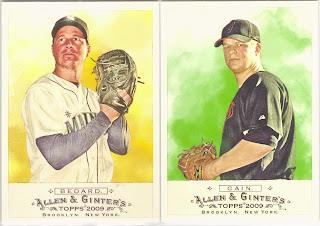 A quick note here to Upper Deck. If you notice the first three cards are posed and quite possibly studio poses as well. However, you will notice that attempts have been made to not necessarily make that fact too obvious. The abomination you call OPC makes no attempt to mask it. As it stands right now, Topps 3 UD 0.

This next card began life as C.C. Sabathia. However, being that I am not a Yankees fan and the gracious owner of my local hobby store, All-Star Cards, knows this, it quickly turned into Roy Halladay.
Thanks Glynn!! 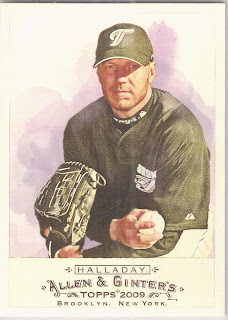 This next card was first seen by the previously mentioned shop owner. I try my hardest to mask what I pull so it appears right when it should. It makes it feel more magical. Anyway, like I said, I'm not a Yankees fan so this Bronx Raspberry was aimed right at me. Still a cool card though. 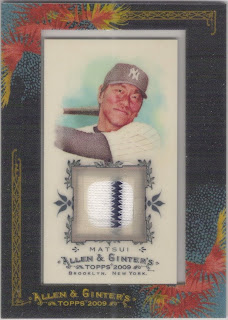 My first A&G mini is yet another hurler. Cincinnati's Aaron Harang. 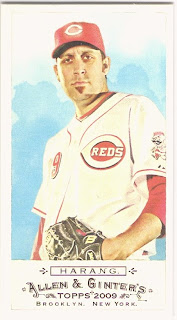 And, lastly, the 'National Pride' card of the pack represents Panama and the Houston Astros, Carlos Lee. 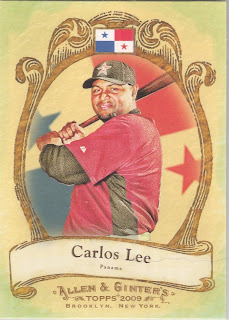 This was a great way to start out the 2009 Allen & Ginter season. The first pack with some Hideki-mojo was still a cool rip. I am looking forward to the next few days as the box breaks roll out and the blogosphere explodes with reviews and scans. I bought 4 packs in all and will post the rest of the interesting/noteworthy cards on my blog sometime later. This, however, was the best pack of the four.

nice to see a pack from a shop owner that wasn't searched. Even if it was a yankee.......

Yeah, I like my home-base store. He doesn't collect, doesn't care about hits and definitely doesn't search.

Those base cards are just flat out beautiful. By FAR my favorite looking mainstream product of '09.

Is it just me, or does Aaron Harang look a little Jeff Goldblum-y?

Hey, do you have an e-mail? I'm curious about the Matsui relic. Thanks, my e-mail is dmihans@optonline.net in case you want to trade it.

Hey... my shop is called All-Star cards, too. I'm sure it's a fairly common name for a card store, but by chance are you in San Diego?

Hey... my shop is called All-Star cards, too. I'm sure it's a fairly common name for a card store, but by chance are you in San Diego?

Drew - my blog is 'Long Fly Ball To Because.....' and my email is available there. Drop me a line.

pricelesspursuit - I am in the Great White North. The home of Wayne Gretzky to be exact.