Written by --David at 9:52 AM
If this pack were any daffier, it would need approval from Warner Bros... er, uh, wait a minute!! 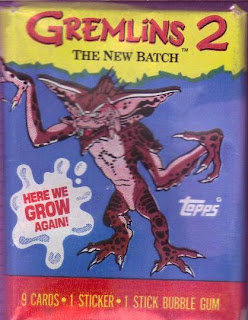 Welcome to another edition of "Topps Movie Tie-Ins." I'm your host, Daffy Dave. In 1990, Topps teamed up with... Warner Bros... for a tie-in deal to produce a set of cards based on the movie "Gremlins 2." It starred Phoebe Cates, but no red bikini scene. They had to do SOMETHING... 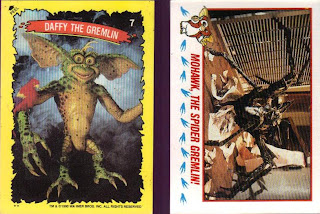 Each pack sports nine cards and a sticker. This pack's sticker features "Daffy the Gremlin." It gets better... Well, "better" is a strong word.

The group of cards above stars "Daffy the Mogwai." See? Better already.

The star above is obvious Phoebe Cates bent over the sink. Wait, that didn't sound right. Ah, and of course, there is the card version of "Daffy the Gremlin." 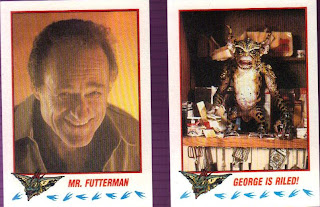 You have to wonder how script writers come up with character names. Mr. Futterman and George. Dick Miller (Mr. Futterman) was a DJ in NYC before breaking into Hollywood. How about that?

Did I mention it starred Phoebe Cates - who plays a character named Kate?