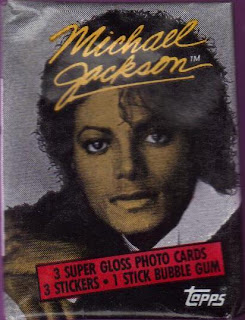 While there was no way I was going to pay $10 for a single pack of these, I did spend about $3 on eBay. If you've read my personal (non-baseball card) blog or happen to follow me on Facebook, you know it is no secret that I am a MiJac fan and have been for many, many years. When he passed away, I knew I'd be buying a pack to post here.

The packs come with three cards, three stickers, and a piece of "Michael" gum:

Notice even the gum is wrapped in these packs. No way Jacko was going to let the breakdown of gum over time ruin his cards.

The first card is a shot from "Say, Say, Say" even though the text on the back refers to his "Beat It" video. Go figure. 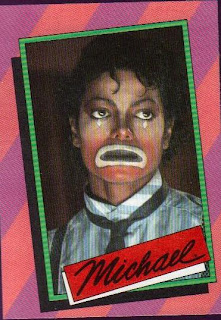 Next, we see Mr. Jackson decked out in his "Beat It" garb, and the text on the back discusses the awards the video won. 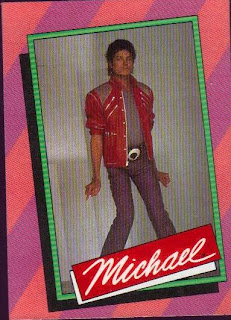 Here is Michael hanging out, just being Michael. This is actually one of the better poses I've seen. 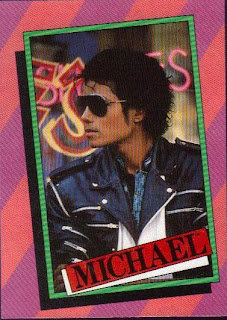 The first sticker looks like something from "P.Y.T." or who knows what. My guess is there are/were girls swooning over it. 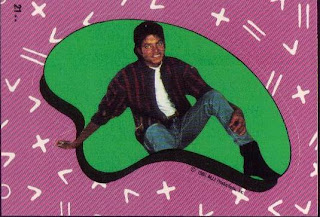 A sticker in the "Say, Say, Say" imagery. I'm not sure how many people could get away with some of these outfits. Really, I'm not even sure he did... 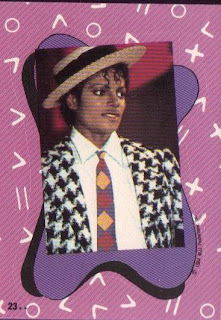 Finally, the last sticker is Michael in a "pensive pose." 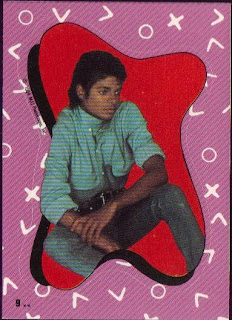 Like his music and entertainment or not, there is no denying the impact Michael Jackson had on the world - pop or otherwise. May he rest in peace.