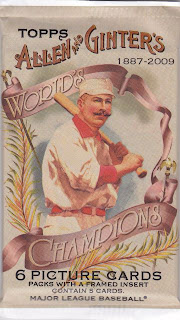 Here is my first pack of 2009 Allen & Ginter of the year. I waited until it hit the large retail giant's stores and then dove right in. I let this set pretty much dominate my baseball card purchases late last summer and I expect the same thing will happen again. It may not make a lot of economic sense to work on sets like this strictly through blasters and the occasional loose (searched) retail pack, but I have my reasons. There are 6 picture cards, as opposed to the 8 you get in a hobby pack. Unlike last year, there really are only 6 cards. Last year if there was a US Flag card (1:2 packs) you actually received 7 cards. Since this year's stuff also has a one per pack National Pride insert and the requisite mini, there are a maximum of 4 base cards per pack. Ouch. 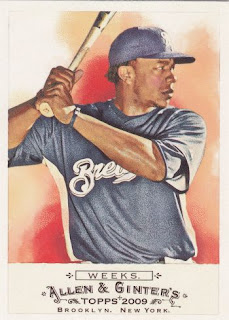 131 - Rickie Weeks (Weeks has had an unfortunate season, tearing the tendon sheath in his wrist - or is that sheath tendon. Unfortunate... if you're a Brewers fan! And I'm definitely not.) 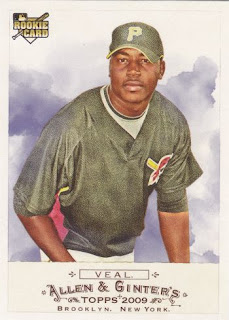 124 - Donald Veal (RC) (Speaking of unfortunate, here's a guy named Donald Veal. I know nothing about him, but the idea of veal as a culinary item creeps me out.) 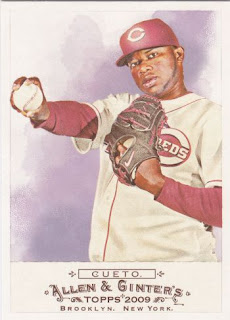 266 - Johnny Cueto (Interesting pose for Cueto. His hat is not nearly crooked enough, however.) 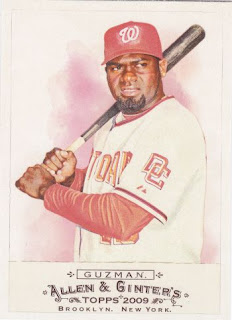 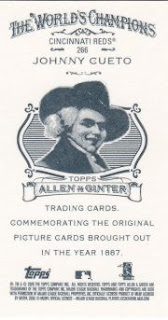 266 - Johnny Cueto Mini A&G Back (Oh man, that guy again? I'll show the back, because you already saw him more or less and this one is one of those slightly special Allen & Ginter backs.) 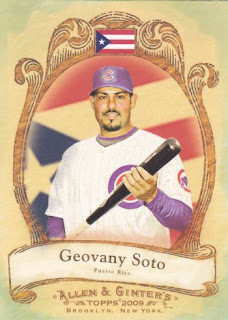 NP4 - Geovany Soto National Pride (I like these. I don't like Soto... or Small Bears in general. I wish these cards were thick just to stick with what Topps had going with this set the past couple of years. I think they are doing some subtle things with their sets to cut costs, however. Has anyone noticed how the UV gloss is different and slightly cheaper feeling on the Series 2 base set as opposed to Series 1? I'm just speculating, here...)

I feel like I DID notice the difference in Topps series one and two, especially with the gloss. Series two just wasn't as... glossy. You notice it if you hold a pack of each and flip through them quickly.

Perhaps that's also the reason for the price difference between boxes of the two series?

Soto is way less... evil looking on his National Pride card. Must be all that national pride or something.