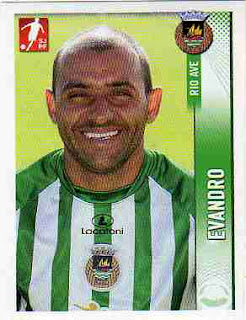 All footballers only have one name. Evandro here loves playing football and apparently lives on Rio Avenue. These cards are very minimalist so I don't even know his position. He looks like a goalie to me though. 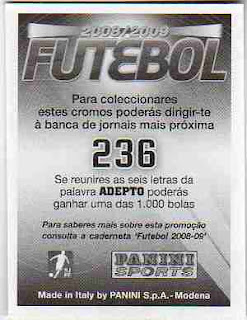 Here's the back of the sticker. Like most sticker sets, all the backs look exactly the same except for the sticker number. 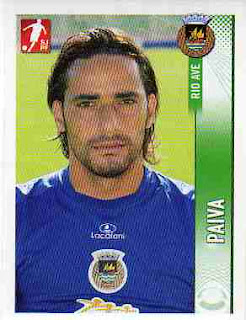 This guy also lives on Rio Avenue. Maybe he and Evandro are roomates? 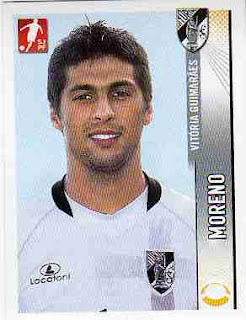 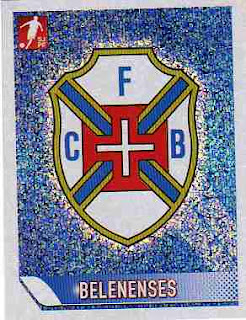 SHINY! I cheated and looked this up on Wikipedia. They're a Portuguese team based in Lisbon that last won their league cup in 1988-89. 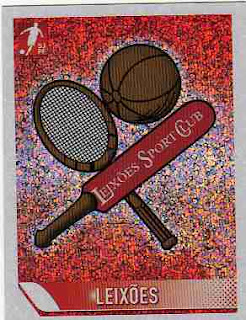 SHINY STICKER HOT PACK! I don't know who these guys are but they apparently excel in cricket, badminton and league beachball. 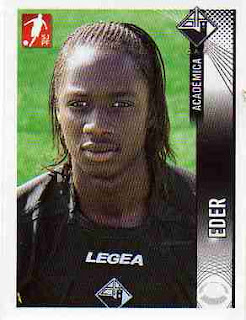 Apparently Mr. Eder goes to Academica. Sport is good and all, but it's nice to see a sticker set promoting going to school instead. Stay in school, kids! The economy is horrible, you don't want to try to find a job in this mess! Grad School, PhD, fourth bachelors, who cares! just stay in school until they throw you out!

This is Panini's set released in 08/09 (obviously) for the Portuguese League. Haven't heard of any of these guys, either, but that's not surprising considering none of them play for the Big Three of Porto, Benfica or Sporting.

killer hot pack, dayf. i've only managed to pull a couple of randomly inserted shiny team logo stickers from the few packs that i've opened. i picked these packs up from a bakery/cafe in toronto's little portugal for 90 cents a pack. i figured they were a simple alternative in light of my ud hockey boycott.