Written by Jeremy at 5:14 PM
I didn’t even know that they had packs of this for sell. I only thought they came in inserts of other packs.

This is a retail pack that lists 8 cards. Packs with a relic contain 7 cards. The 2007 series is modeled after the 1911 T-3 cabinet cards. 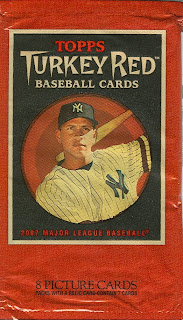 First card is a David Eckstein card # 87. He’s bunting and looks a little to focused on the task at hand. A little creepy to me. The Turkey Red logo is different on this series than the later ones. 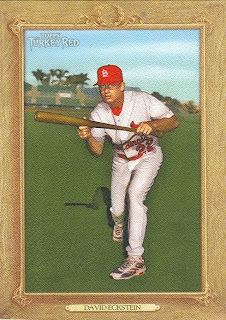 The first thing I notice about this card is the painted shadow behind him. I think these cards look a little more like drawings than the newer Turkey Reds. 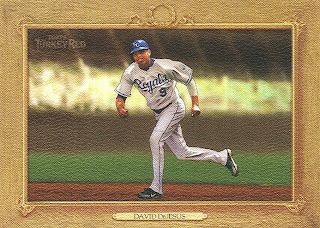 #86 David Dejesus. Sequential numbering and sequential Davids’.
A really nice horizontal card with a strip of bright light behind DeJesus. I guess this supposed to be fans sitting in the stands? It’s hard to tell, but it looks cool. 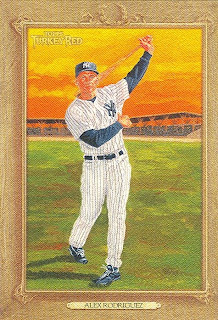 #20 Alex Rodriquez
It doesn’t really look like him much unless you really squint your eyes. Slightly awkward pose, but a really cool stadium background. 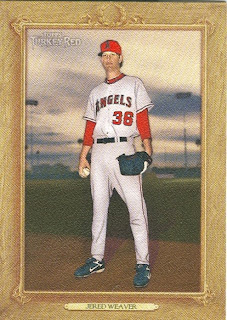 # 142 Jered Weaver. This card looks a little like current Turkey Reds with the subdued dark background. In his white uniform Jered really pops out of the background. 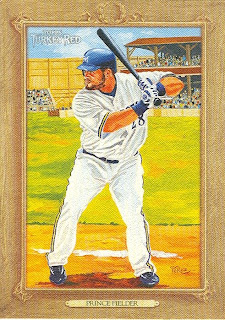 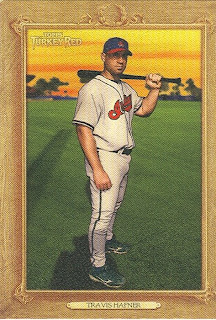 This card is awesome!!! For someone interested in photography like me, this is a funny card to have. The big shadow on the left is the first thing I noticed, but later I noticed the shadow of the “cameraman” on Hafner’s leg.

All in all it looks like a good set. At first I wasn’t digging the borders much, but they grew on me.