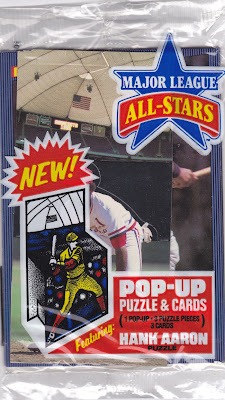 Tonight is the latest edition of the MLB All-Star game, and it's a special one for me because it's the first one in my lifetime held in the city of my favorite baseball team, St. Louis. I've never actually been to St. Louis in my life, however, and with more foresight and financial planning I probably should have made this week the time for my first trip to the Gateway.
On a completely different note, I received this pack from dayf of Cardboard Junkie fame, teased it, and caved in and decided to post it here as recommended. I used Blogger's "large" image setting because this set is jumbo-sized. Here it goes.

- Ozzie Smith Pop-Up (I already own this, but not the regular jumbo card, which is why I wasn't sure what to do with the pack. But hey, now I have a great excuse to actually pop this one up and display it in its intended 3D glory. Ozzie is clearly shown fielding his position during a day game, but the generic Metrodome backdrop makes any sunlight look bizarre and out of place.) 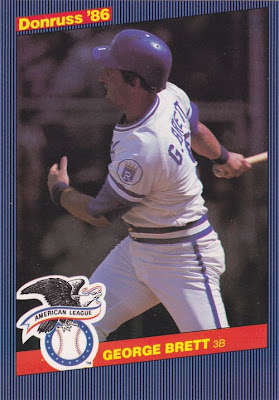 12 - George Brett (1986 cards are special for me, because it was the year I started buying packs at the ripe old age of 10. I always had a strong dislike for Brett, probably stemming from my family's Yankee-loving roots and the whole pine tar thing.) 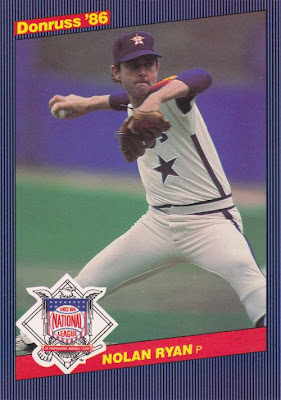 21 - Nolan Ryan (Great looking card here. I've always liked these jumbo cards and had a decent stack of them when I was a kid, but they are difficult to store.) 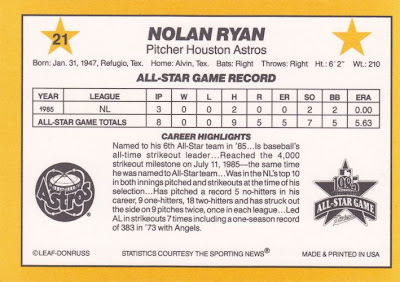 Big props to The Sporting News for providing the statistics. Perhaps Leaf-Donruss did not have their own All-Star stats department. 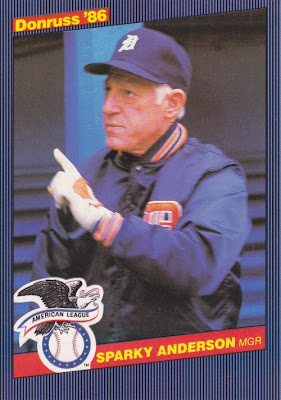 58 - Sparky Anderson (Ouch... a bad blurry photo. The first manager to win titles in both leagues deserves better. This is an '86 Donruss card, but the set commemorates the 1985 All-Star Game in which the managers of the 1984 World Series participate. Hopefully you're not confused at this point.) 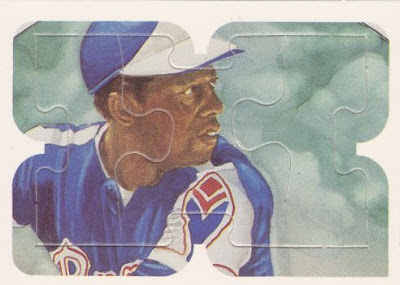 22/23/24 - Hank Aaron Puzzle (This isn't as jumbo as it looks - it's a regular sized card, but Blogger is being wacky and I'm being lazy. If you could get any section of puzzle pieces from this Hank Aaron set, this is probably the best one to get. The majority of the pieces are probably little fluffy clouds and pieces of Aaron's shoelaces or elbows.)
Here's to hoping the National League ends the streak tonight!