Written by Joe S. at 5:04 PM
Tradition is not to be confused with regular Fleer, also available in bargain bins everywhere. The regular version has the matte finish we all know and love from the mid to late ’90s Fleer sets, though the checklist is no more impressive than the set you see featured here. 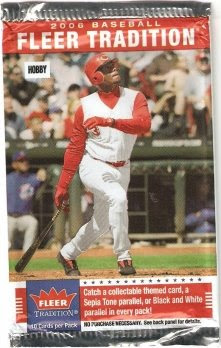 The front of the pack says to ” Catch a collectable themed card, a sepia toned parallel, or black and white parallel in every pack”. In Fleer speak, that means an insert in every pack. The back makes no insertion promises other than “this pack contains a random assortment of Fleer Tradition Baseball trading cards.”

#19 Casey Kotchman, #60 Carl Crawford, #18 Francisco Rodriguez. I wonder how Crawford will go down in history; he’d already be a mega star if played anywhere but Tampa Bay. As for Rodriguez, I just wrote about the save being arbitrary and overrated. I’m not impressed with his single season record.

#61 Scott Kazmir, #79 Travis Hafner, #107 Lastings Milledge. Milledge doesn’t seem like he’ll ever put his skills to use, and if he’s not good enough for the Nationals, he’s not good enough anywhere. Time to pull the plug on him, I think. Remember when Hafner was good? He sure experience a mysterious drop in power…

#197 Gary Sheffield, #164 Kendy Morales, #122 Brian Giles. Sheff has a shot at the Hall of Fame, but I can just as easily see him being kept out because of his link to steroids and PED’s. Giles wouldn’t be on a major league roster anywhere but San Diego, so I don’t think this should count as one of the ten cards.

#GR-24, Chris Carpenter. Ah, the one-per-pack themed card. Carpenter’s career looked a lot more promising a few years ago, didn’t it? I’m usually a fan of Fleer’s inserts, but this one… not so much. 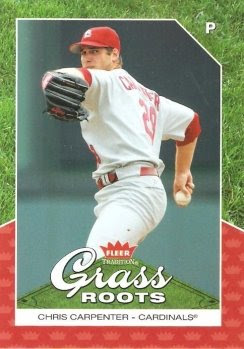 This was an exceptionally good pack... in 2006. Hindsight tends to have more of a negative effect on our perceptions of cards than a positive one. But considering I got this from the dollar bin at my card shop, the retro-y look and bright colors make for a decent pack.

I'm a fan of that insert! Carpenter is having a pretty impressive year (aside from the time he missed due to, er, injury.)