Written by Johngy at 5:20 PM
I am back and hopefully I will be contributing more regularly.  Ironically, I am featuring a pack that I would never buy.
The 1996 Pacific Invincible Football Trading Cards are everything I hate about modern day cards.  They are high gloss cards with an overly flashy design and they contain no stats on the back.  In addition, the three cards in my pack are numbered differently (SM 31, SM110 and I-113).  I looked for info on this set and found many parallel sets and enough misinformation that I gave up and decided to post what I had and end the farce. 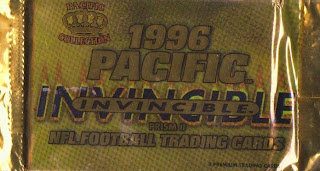 First up is Wayne Martin, New Orleans Saints Defensive Tackle.  Martin is shown bursting through the card front, but I have no idea what he is doing on the play because of the cropping (nor do I even know if he has a left arm). 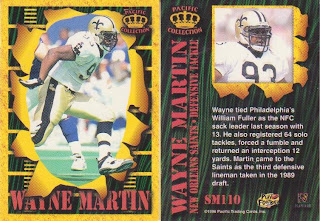 The second card was Robert Green, Chicago Bears Running Back.  Just like these cards, Green was one of many who made an appearance, but not an impression. 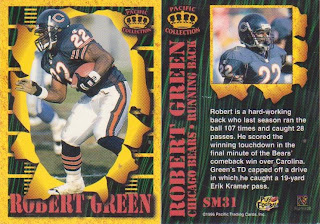 Finally, we have Charlie Garner, Philadelphia Eagles Running Back.  Who wouldn't want a shiny card with an oval shaped clear spot containing a headshot?  Yes, that oval is actually see-through. 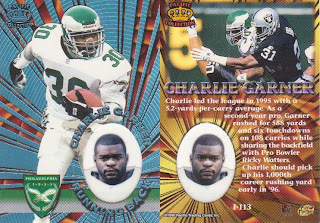 I enjoyed showing these cards more than I ever will owning them.  In fact, I am bringing them back to AU Sports, where I bought them, and dumping them in the once cent bin (and that is overpriced).

I loved Pacific Invincible and how they embedded acetate into their cards. Can't say the same for the non-acetate versions.