Written by Jafronius at 12:27 AM
Greetings!

Hope everyone's doing well and getting ready for the big Memorial Day weekend.  Stay safe, everybody!

Keeping with the parallel theme, here's a pack of the Target red bordered cards that came with the specially-marked blaster boxes...it's a 2012 Topps Series 1 Baseball Target Red Border Blaster Pack!

Once again, I scanned the side of the blaster box so you can see the special designation announcing to the world that this box would have 2 packs of Target exclusive parallel cards.  And again, the packs containing the parallels were not marked in any special way either.  Here's one of the packs:

No need to bore you all with opinions and stats.  I could take them or leave them with the colored borders.  Topps should have had different shots for the parallels, that would have been more fun. 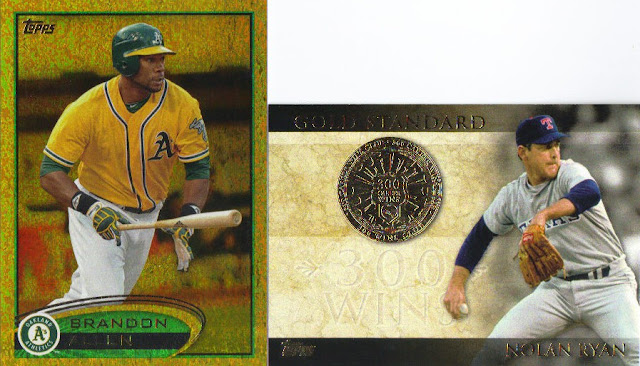 The Golden Parallel Allen looks pretty nice.  They should have kept the serial numbering of the prior XX Years of Topps.  Still would have rather got 2 more red bordered cards.

See, suppose the Vargas shot was a Target exclusive.  That would be cool, right?  I guess it could backfire, with 3 different chains with 3 different versions of the same player.  Maybe I should keep quiet about my wacky ideas.  Still, I do like throwback unis!

Anyway, that's the pack.  More eventually.  Now, go outside and enjoy the weekend!  Thanks for reading!

If you're going to do a red or blue or purple bordered parallel pack, I would rather they leave the inserts out. Give me more of the parallel cards. They make good trade bait.

What was your patch card, just out of curiosity?

I posted the card earlier under "2012 Topps Series 1 Blaster Box Patch Card." It was a Joe Dimaggio Historical Stitches card.