Written by Jafronius at 2:27 AM
Greetings!

Hope everyone's doing well.  I am loving the increased posts on the site.  Keep it up, everybody!


Real quick, a shout out to Wax Pack Geek…welcome aboard!  Looking forward to your continued contributions to the site.  Better yet, I get to hand off the title of Rookie to you.  I’ll send over the My Little Pony backpack so you can carry it around on the team plane.

Without further adieu, here’s a pack of 2012 Topps Series 1 Baseball…Toys R Us edition! 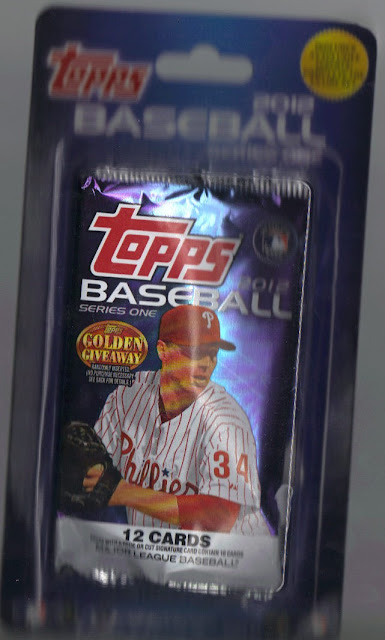 For the last couple of years, they have been having a buy one, get one half off promotion during Baseball’s Opening Week.  I was able to get two packs as part of an Easter gift.  These are regular packs with 3 extra cards…those cards are purple-bordered versions of the base cards.  Notice the attention-grabbing ad at the top of the package, encouraging you to complete the entire set (sorry for the bad scan).  So, wait, 330 cards in Series 1, with 3 cards in a pack.  I gotta buy 110 packs of cards to have a shot of getting the set (and that’s assuming no duplicates)?  At 3 bucks a pack, that’s $330!!!  Fortunately for me, I only paid $4.50 for the two packs, kinda justifying 6 purple-bordered cards for $.50.  Sorry Toys R Us, I ain’t falling for your marketing tricks!

The newest member of the Perfect Game club helps start things off.  Anyone listening to the radio call of the game heard that pitched the perfecto at U.S. Cellular Field, in , instead of Safeco Field, where they actually were.  Word did get to Ed Farmer, the Sox’s play-by-play man, about the error, and I guess he was pretty amused by the mistake. 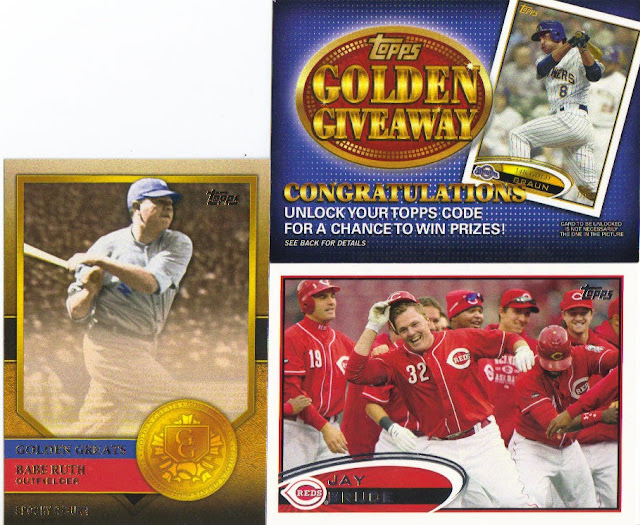 A couple more examples of good shots with Jennings and Morgan.  Seeing the and Olivo cards back to back made me wish that the Olivo card was a shot after tried to score.

I like the playoff cards in this year’s set, although I don’t know why they used the World Series logo instead of the NLDS logo.  That and why they shot they chose was Carpenter being consumed by Cardinal zombies.

And there’s the 3 “Exclusive Inserts.”  Now you know why I showed the back of the Halladay card earlier.  I will admit, I could clearly see that Halladay was the third card when I held the package just right.  Does that count as pack-searching?

Just for the record, the 3 “Exclusive Inserts” in the other pack I got were the Mariano Rivera checklist (#109), Kevin Youkilis (#160), and Justin DeFratus (#243).  I forgot to scan them in and I’m too lazy to do so now, so if you have those three cards, imagine a purple border around them.

Anyway, that’s the pack.  More later.  Thanks for reading!

Oh no, I'm getting rookie hazed!!

Nice pack though...I sorta like the Golden Greats and Walk Off inserts.