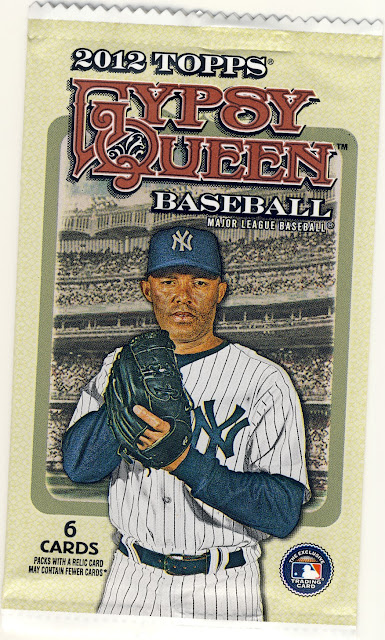 I didn't read up on Gypsy Queen too much before diving in and so I didn't realize that the base cards were actually going to be purple.  Now, I've got nothing against purple, per se, but the longer I look at them the move the purple isn't really purple, it's lavender and it's bugging me.  Because...

When you get to a card that isn't lavender the cards are so vibrant and deep that it is puzzling that Topps would decide on the color they did for their base cards.


For the baseball blog that I read, Jered Weaver's no-hitter against the Twins on Friday has turned into more of a story of how bad the Twins are this year rather than Jered's outstanding performance.


Both Albert Pujols and Lance Berkman have zero home runs this season this far..Lance has been out for three weeks on the DL while Albert has been just not himself.  Pujols is fourth on the active home run list and Lance is tenth.

This is the best card I've pulled from Gypsy Queen...I think ever.  Who doesn't love Jackie Robinson, but my money is on Larry Doby!


And a Lou Brock card rounds out the pack:

I had forgotten (fortunately)about those striped helmets. The Cardinals apparently only used them on the road in 1976. Wasn't a fan of the Pirate's striped flat tops and not a fan of the Cards version either.