Written by Punchy Sam at 8:43 PM
Today, I have for you some 2003 Fleer Platinum. I'm not entirely sure what the logic is in calling this product "Platinum"... its nothing like Bowman Platinum... it looks pretty much like Fleer's version of Topps Heritage. 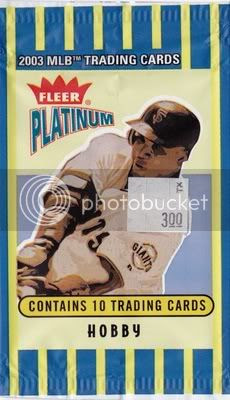 Here are the first two base cards, Eric Chavez and Gabe Kapler. As you can see, the base set is almost a hybrid between the 1987 and 1989 Fleer sets (taking the colors from the former and stripes from the latter). Next are a couple star cards in the form of Bobby Abreu and Pedro Martinez. I love me some Red Sox Pedro mojo. 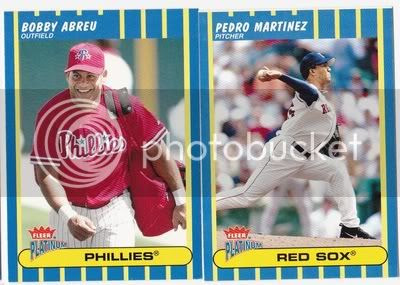 Here is Roy Halladay in the early 00's ugly Jays Uniform, and Bret Boone from his second stint in Seattle (he would go on to win a Gold Glove in 2003). 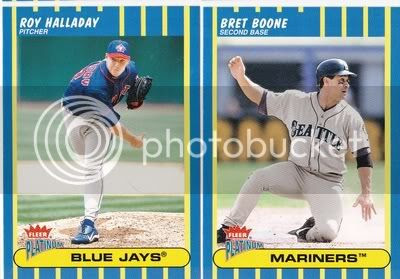 Some more base, in the form of Juan Pierre and Brian Giles. Juan Pierre has historically been a very good TTM auto signer, perhaps I'll send this one his way... these are nice TTM cards. 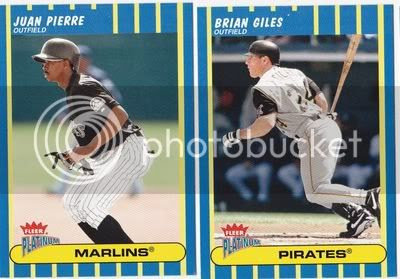 Next we have a couple inserts... first is Shea Hillenbrand (this kinda has the Greats of the Game theme) and the second is a Jamey Carroll prospect card in the style of Fleer's less-than-spectacular 1988 offering. 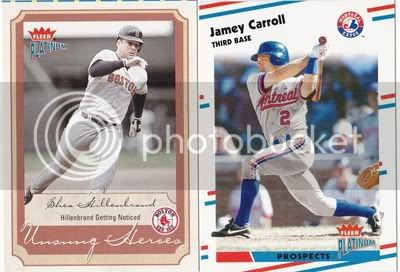 This was on okay pack. I like the design. Not blown away.

I like a lot of Fleer sets, but this one was blah.

The '88 set was better than this one.