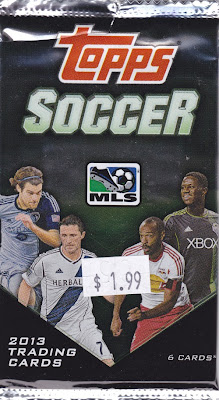 Surprise! Topps acquired the license to produce MLS cards starting this year after the previous license holder, Upper Deck, lost it. (Okay, that part is not a surprise.) I've only been following this league for as long as the Portland Timbers club has been a part of it, which means just three seasons at this point. The Timbers are enjoying their best season of their young MLS existence under first year head coach Caleb Porter, and I decided to snag a pack of the new Topps release even though I don't plan on collecting the stuff. I'll probably talk myself into picking up a Timbers team set at some point, though. 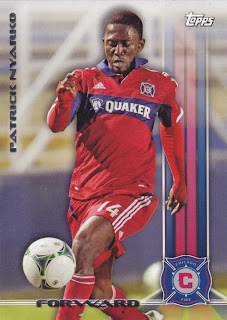 169 - Patrick Nyarko - As you can see, Topps did a very un-Topps-like thing and went with full bleed photos. The font for the player name is nearly unreadable, however, and there's something about these cards that reminds me of Panini's attempts at kid friendly sets like Adrenalyn XL. 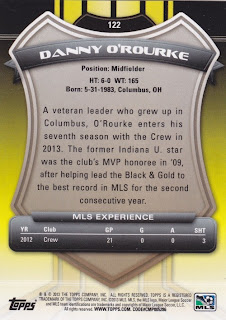 122 - Danny O'Rourke - The backs of the cards are what I really have a problem with. The stats on the back are pathetic, seemingly indicating that every player has exactly one season of "MLS EXPERIENCE". Did anyone QC this? I am not a fan of cards with a single line of stats, but they could have at least changed the heading to something along the lines of "PREVIOUS SEASON" and added a second line of career stats. Every card in the pack looks like this. 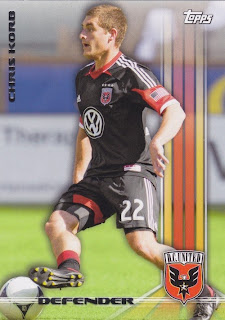 74 - Chris Korb - Korb is a defender for the D.C. United Volkswagens. 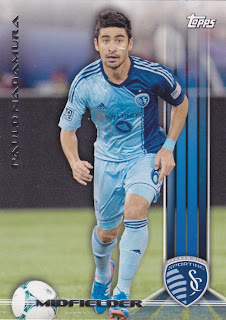 93 - Paulo Nagamura - Sportking Kansas City has an awkward team name. Annnnnnnd that's all I got. 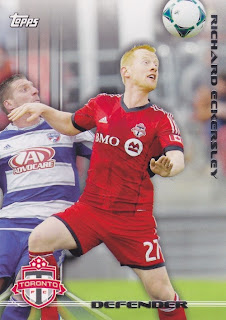 145 - Richard Eckersley - Toronto FC is still relatively new to MLS, which is becoming more North American in scope and less a United States league. Now, if they could only move that Chivas team to south of the border where it would belong if it weren't the reverse non-union Mexican equivalent of a real football club. 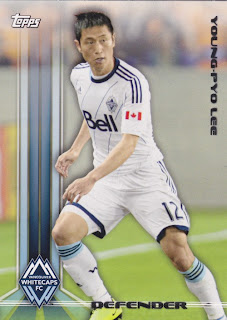 197 - Young-Pyo Lee - I just watched the Whitecaps play the Timbers in a frustrating rivalry game last weekend, so I am still in no mood to say anything positive about this card. Lee is an interesting story, having only joined up with the MLS in the twilight of his playing career.

Hey Madding, can you set the Nyarko aside for me for the next time we trade? Hes a former Hokie.