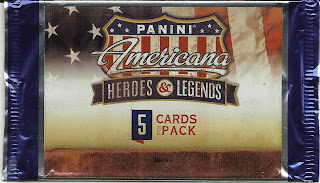 I made a trip to the Dollar Tree with my wife recently. She bought things for her classroom, and I scanned the pickings they had in the way of cards, stickers, etc to see what I could find to post here. I found a few things, and this is one of them:

The front of the cards feature the person's name in foil at the top, a black-and-white (okay, greyscale) photo that takes up much of the card, and a colorful banner along the bottom. The banner features the Americana logo and then also features a background related to the photo. 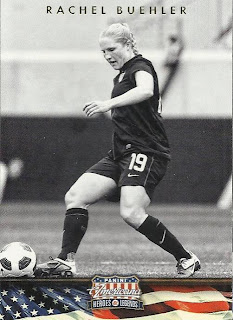 Rachel Buehler - Soccer - Card #88 - You know that poor woman had to endure years of "Anyone? Anyone?" Heck, she probably still has to! 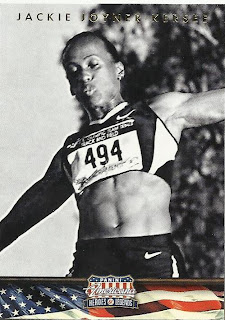 Jackie Joyner-Kersee - Track and Field - Card #46 - Her name is synonymous with Olympics, Track-and-Field, and women athletes. In that order. 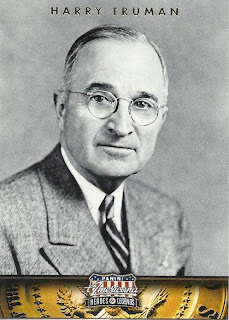 Harry Truman - President of the United States - Card #33 - Dropped a couple big bombs and created the UN, among a laundry list of other things. 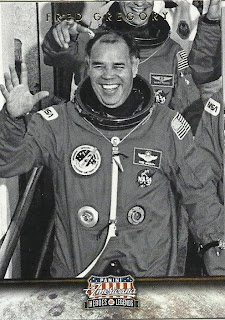 Fred Gregory - Astronaut - Card#90 - First black to command a space flight. The card says "African-American," but I have black friends who take serious offense to that statement. After all, Caucasians don't call themselves "Anglo-American." For what it's worth. 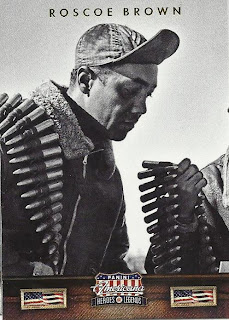 Roscoe Brown - Tuskegee Airmen - Card#106 - Commanded the 100th Fighter Squad of the 332nd Fighter Group. Also was the third pilot to shoot down a German jet. That's what I'm talking about!

The card backs feature a HUGE Americana emblem, the card number, the person's name and association to heroism or being famous, and a small rectangle with historical and/or biographical information. There is also a tiny copyright line at the very bottom.

Interesting tidbit: People who try to get that Roscoe Brown card signed by him through the mail get a note from him saying the picture on the card isn't of him, but one of his airplane mechanics. Great blog, just passing through.