Hope everyone's ready for the weekend.  Saw these guys at the Target toy aisle a while back and said to myself, "self, pick one up for the site when it goes on clearance."  Then last month, Colbey's Random Toy Reviews site had a video post of the contents.  I was at Target today and there were a couple of packs on clearance, so here they are...2 packs of 2013 Hasbro G.I. Joe: Micro Force! 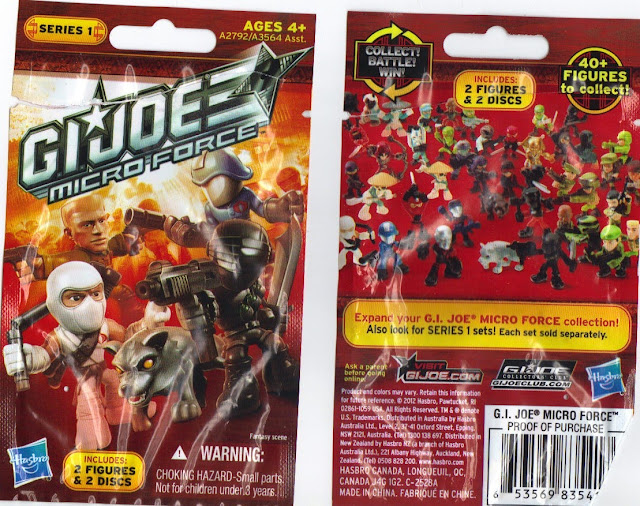 I didn't really notice until recently, but there certainly a lot of these blind bags popping up in the toy aisles.  Sure, it's not cards, but it's something you rip open, so I figure it counts.  I scanned the back so you can see both sides.

The pack says Series 1.  Don't know if there'll be a Series 2.  I can say there isn't a Series 2 currently on the shelves.  When you open the pack, there's 2 figures, 2 discs for the figures to stand on (although the figures can stand on their own), and a checklist: 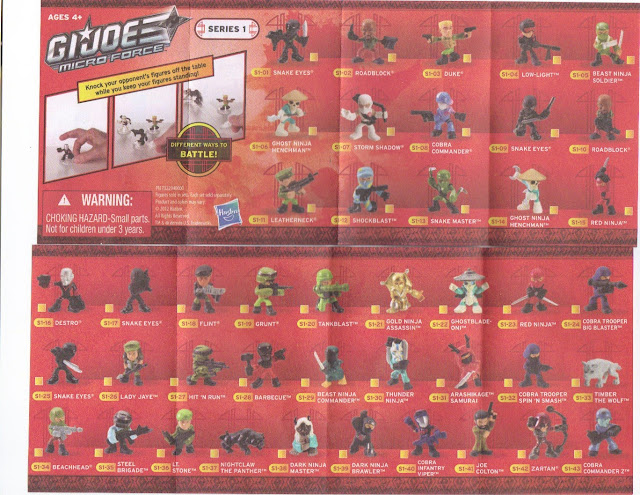 Holy crap, that's a lot of ninjas!  With all these ninjas around, how can Cobra lose?  There's Ghost Ninjas and Beast Ninjas and Gold Ninjas and Dark Ninjas!  I mean, you're Leatherneck...how do you take out a Ghost Ninja AND a Gold Ninja???  And what the heck is a Gold Ninja?  Was he the best and brightest of the ninjas?  There's even a Cobra Commander Z, whatever Z means...zombie maybe?  Gives new meaning to the animated movie's best scene.

You also get a brief description on how to play with the figures.  It seems like a game of marbles to me.  Looks like you have to get one of the playsets to get the thing that will fling your characters across the table, because otherwise it looks like you have to flick them about.  Anyway, I was just hoping to get some familiar characters.  How did I do?  Well, 3 out of 4 ain't bad. 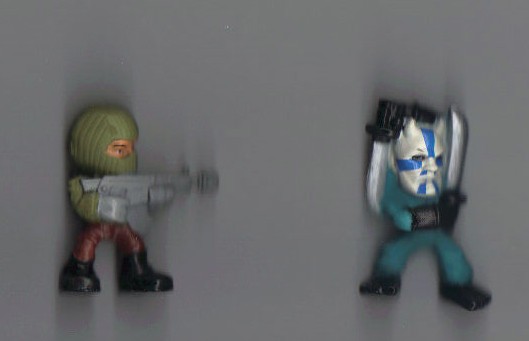 The figures are plastic and are slightly bendable.  Is the Thunder Ninja in either of the live action movies?  I haven't gotten around to seeing them yet.  And again, how does Beachhead defeat a ticked off Thunder Ninja?  That Ninja controls the thunder!

Roadblock gets 2 figures in the set, but Snake Eyes gets 4 figures!  Really?  What, you ran out of characters?  There's no Scarlet, no Shipwreck, no General Hawk, no Major Blood, etc.  Maybe they are in Series 2, whenever that comes out.  Still, a much more satisfying pack, since both are iconic figures in the show.

Anyway, those are the packs.  I wouldn't pay 3 bucks for a pack, but I'm probably not the target audience.  Still, it was fun to see who I'd get.  Enjoy your weekend, everyone...thanks for reading!

Hey thanks for the link to my horrible video! I love these little guys, but I think any future plans for them have already been scrapped by Hasbro.

Hello my friend. You are up to pick in my contest. Please visit my blog and pick your prize!

They should release series 2, they MSUT :)