Written by shoeboxlegends at 11:41 AM
I opened more packs of this stuff as a kid than probably any other product, save maybe 1989-90 Topps hockey. Like most sets from this era, it can now be found dirt cheap. Nonetheless, I still think it's a great set that has held up over time. The owners of my local hobby shop actually gave me a free wax box of this a couple of weeks ago, here's the best pack: 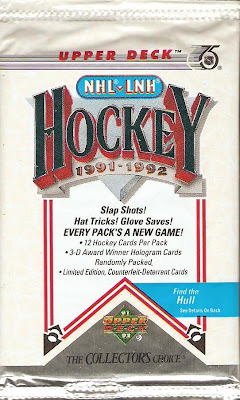 As the wrapper indicates, we get 12 cards per pack, and the possible inserts to be had are the Brett Hull Hockey Heroes as well as Award Winners hologram cards. The blue "Find the Hull" banner tells us to see details on back: 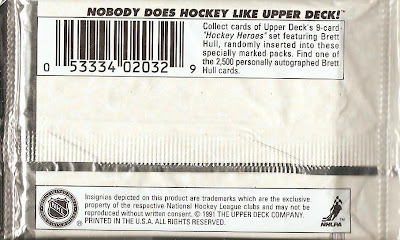 As you can see, much like the 1992 Upper Deck baseball release (in which you could pull a Ted Williams auto) there were 2,500 autographed Brett Hull cards randomly inserted into these wax boxes. I'll ruin the suspense now, you won't be seeing one in this post. Let's see what's inside: 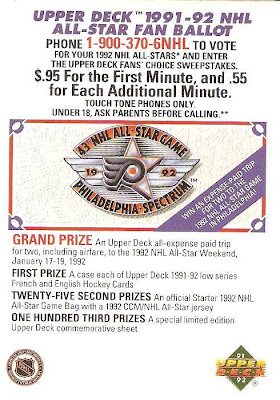 All-Star Ballot - Back in the day, my 10-year-old self would throw this in the trash with the wrapper, it was serving no purpose other than standing between me and my cards. Now I find it kind of funny to look back at who was on the ballot this year. Here's the full ballot, I went ahead and made the selections I likely would've made being a Whalers fan at the time. Who would you have chosen?

Alright, now that we've gotten that out of the way, onto the cards: 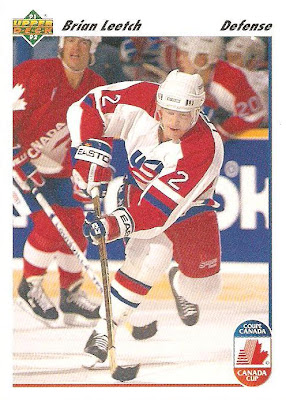 #35 - Brian Leetch - USA - Canada Cup - One of my favorite parts about this set is the Canada Cup subset. For those of you who aren't hockey fans, the Canada Cup was an international tournament that first took place in 1976. Since NHL players were ineligible to compete in the Olympics as well as the World Tournament, countries like Canada and the US were unable to showcase their best players in international competition, and the Canada Cup gave them a place to compete. 1991 was actually the final Canada Cup, and unfortunately for Brian Leetch he and his USA teammates lost to Canada in the final. 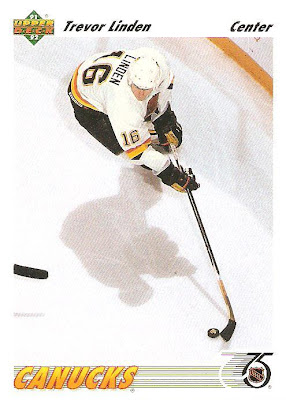 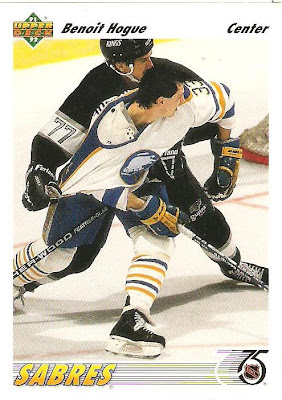 #159 - Benoit Hogue - Buffalo Sabres - The design for these, like seemingly all early-90's Upper Deck sets, incorporates a whole lot of white. The logo in the lower right corner commemorates the NHL's 75th season. Let's look at the back: 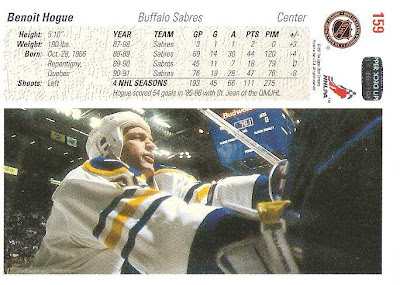 My scanner cropped the edge of this one a bit, but you get the drift. The backs are as good if not better than the fronts in this set. The widely cropped photos, which exist on pretty much all early UD sets are well done, as usual. This often prevents full career stats from being listed but that's a small price to pay. We have the hologram puck on the back as well, so I can rest safe tonight knowing that my 1991 Upper Deck Benoit Hogue card is not a counterfeit. What a relief. 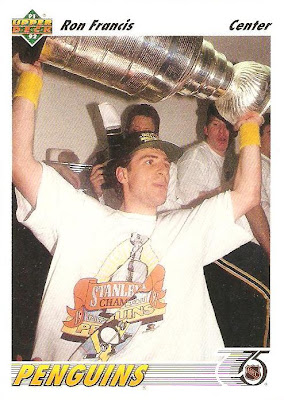 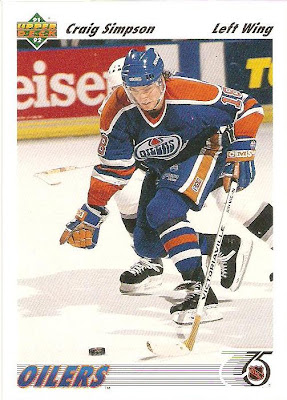 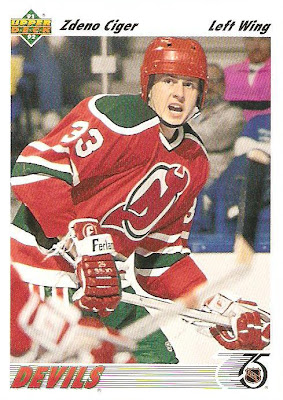 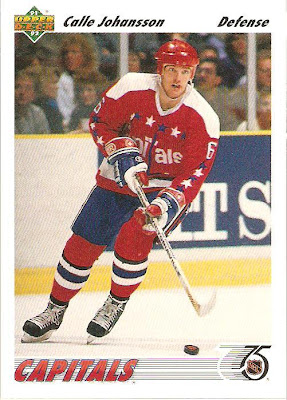 #316 - Calle Johansson - Washington Capitals - Drafted by the Sabres, Johansson was better known as a Capital, playing a total of 15 seasons in Washington. 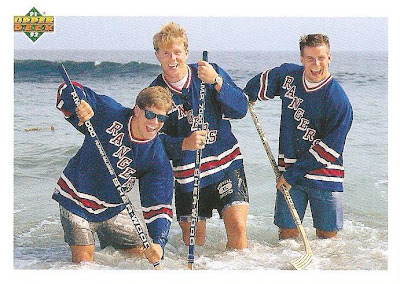 #440 - Star Rookies Checklist - I have no idea what Upper Deck was thinking with this one. What a stupid card. This is not only the dumbest card in the set, but probably one of the dumbest cards I own period. 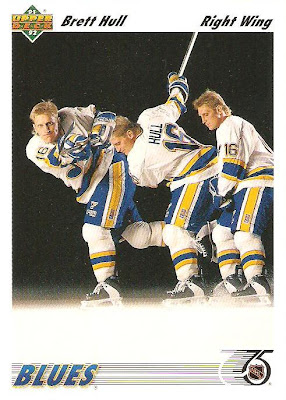 #464 - Brett Hull - St. Louis Blues - The pack starts picking up steam again at this point. I might not've pulled a Hull auto, but at least I got his base card. Hull was one of a few players in the set, including Wayne Gretzky, with this same time lapse photo thing going on. 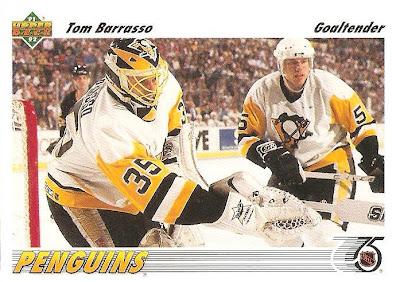 #116 - Tom Barrasso - Pittsburgh Penguins - As is the case 99% of the time, I think the horizontal cards look better in this set. This is the best photo in the pack. For the second time in one pack though, I'm reminded of the horrible dealings of the Whalers' front office, as we see defenseman Ulf Samuelsson behind Barrasso. Shudder... 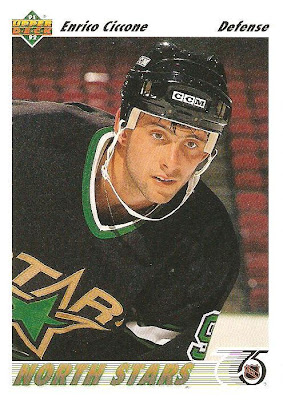 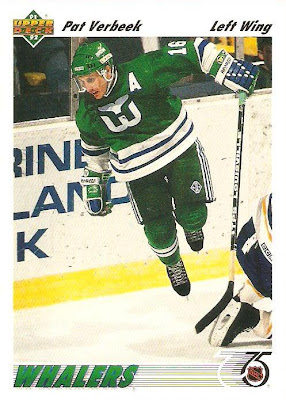 #193 - Pat Verbeek - Hartford Whalers - One of the best Whalers of all time. We're at 12 cards, so that would normally be it for the pack, but this one had an insert: 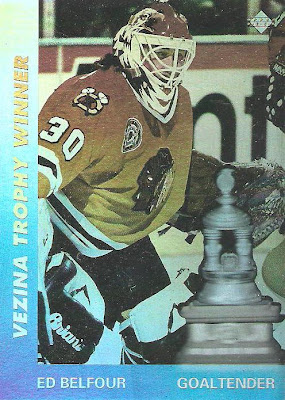 #AW7 - Ed Belfour - Award Winners Hologram - This was back when pulling a hologram was actually thrilling. This card looks 100 times better in the scan than it does in person, which is the opposite of most hologram cards.

Hope you enjoyed, I still think this is one of the best junk wax era hockey sets. If anyone wants to trade I've got a ton of doubles.