Written by Collective Troll at 11:52 AM
Howdy pack rippers and readers, the Troll is back to rip another pack…
Today’s feature is the Premiere Edition of 1992 Upper Deck Minor League. The front of the pack reads “Catch tomorrow’s heroes today!” and advertises “12 Limited Edition cards in every pack. Look for collector holograms. Every card is holographically enhanced.” 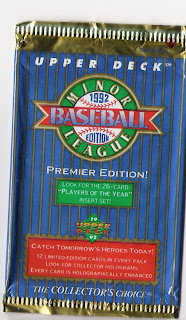 This features minor league players (duh), first rounders, top prospects and high level farmhands. The design is a little dull, but seeing the quality of UD photography with the colors of the minor leagues is a nice combo for me. 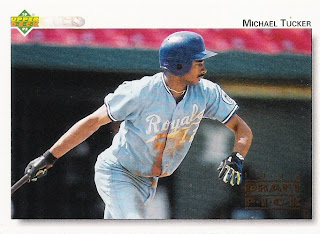 Out of 12 cards pulled, all but one player made it to the show for at least a cup of coffee. Here is what we got:
Card #6 of Michael Tucker, the 10th overall pick in the 1992 draft. 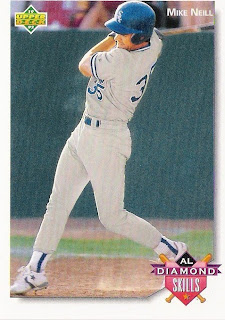 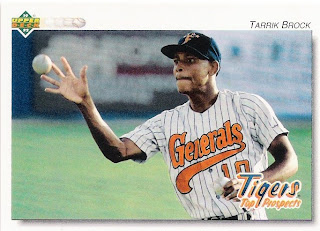 Card #189 of speedy outfielder Tarrik Brock. Brock got a hit in his first big league at bat, but only managed one more in his career. His currently the Marlins first base coach. 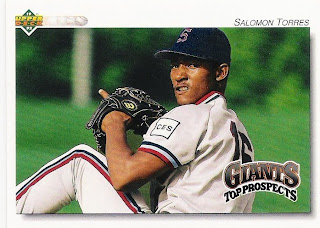 Next up is card #261 of Shreveport Captains pitcher Salomon Torres who pitched in 497 games out of 5 different bullpens over his 12 year career. Card #129 of Rangers pitching prospect Steve Dreyer is next. 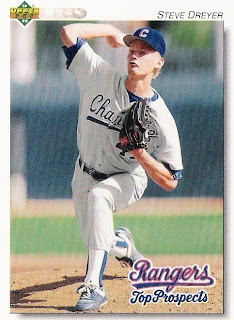 This very blonde righthander had a great ’91 in high A Port Charlotte, but had a worn out arm by the time he made the show. 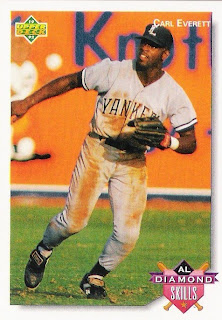 Card #56 shows Jurassic Carl Everett from the Ft. Lauderdale Yankees. Card # 142 of the second overall pick in the 1992 draft, Paul Shuey is next. 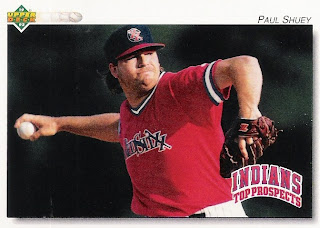 You could call him a bust, but he had a respectable career pitching out of the bullpen in the steroid era. 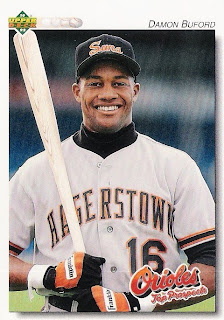 Up next is card #221 of Hagerstown Suns outfielder Damon Buford. 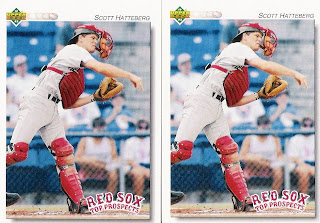 Next out of the pack is a double feature of future Red Sox catcher Scott Hatteberg. It’s always weird to me when you get 2 of the same card in one pack. 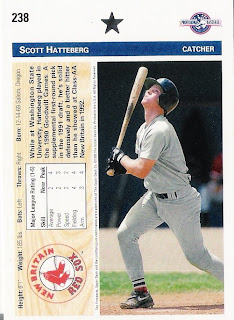 I would be pissed if I was building this set! Okay, up next is is card #71 of Scott Burrell. I looked into this and Scott is of no relation to Pat the Bat. 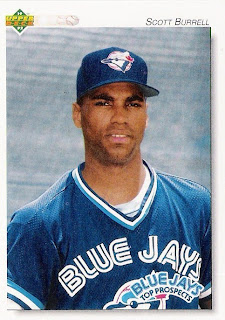 I do my research. My research also told me that Burrell was the only player in this pack who didn’t make it to the big leagues. Well, not as a baseball player. The 6’7” pitcher was a first round pick for the Mariners in 1990 but only spent two seasons pitching in the minor leagues, winning just 2 games. Aside from baseball he also spent some time playing with a bouncier ball. He was a star for the U Conn Huskies and became the first player in NCAA history to have 1,500 points, 750 rebounds, 275 assists and 300 steals in one season. He was drafted by the Charlotte Hornets in the first round of the 1993 draft making him the first American player to be drafted in the first round in both the MLB and NBA amateur drafts. Scott Burrell would go on to win a ring with the Chicago Bulls in 1998. He is currently a coach at my Mom’s Alma Mater, Quinnipiac University. 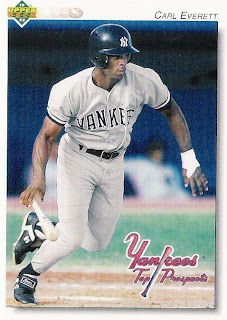 The final card out of the pack is card #155 of Carl Everett. This is C-Rex’ second appearance in this pack and they are different! I had a lot of fun with this one and I would definitely rip more if I could find it. Some cool blasts from the past, good photography and some cool stories... 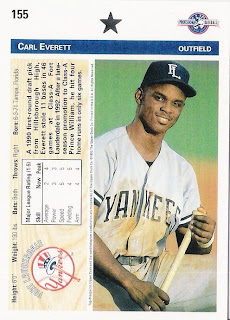 I think this would be a fun set to chase and then TTM. Just saying… Thanks for reading, get in touch if you want any of these cards. Go Rays! Troll out.

I put a few of these sets together when they were first released. They had a couple of cool insert sets as well that were fairly hard to pull.

We got a box of this in a huge junk wax lot we stumbled across. Sold it on eBay for a relatively pretty penny... now I'm bummed we didn't open it! -Andy

If you are interested in trying to start getting autographs TTM for this set I have around 100 of the signed already. Tried to start the set TTM 10 years ago. Had a few kids then that all stopped trying to get the autographed set.

Steve,
I would DEF be interested in those autos... Please get in touch. I'd love to hear the stories of you chasing them, too. Cheers!

I reallly really want that scott burrell card!!!! how much you asking for it or just WHERE else can I find it?

I REALLY WANT THAT SCOTT BURRELL CARD SINCE I COLLECT CHAROTTE HORNETS CARDS! How much are you asking for it or where can I find it?

nevermind I found it