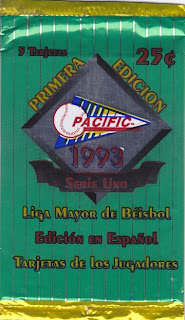 I'm taking requests! The next pack that I post here to APTBNL from the big box of stuff I received from the Junk Wax Giveaway will be up to the readers of this fine blog. Please leave a comment (or an e-mail if you're shy) with your suggestion of what pack I should post next. If you don't feel like digging up the video that Matt made, you can at least get a glimpse of a lot of the packs in the banner.
Meanwhile, here's a value priced pack from the giveaway. I had no idea that Pacific's first major level foray into MLB cards was actually issued in multiple series. I tuned out of collecting cards at some point in the first half of the 1993 calendar year, though, so I guess my lack of knowledge isn't that surprising. 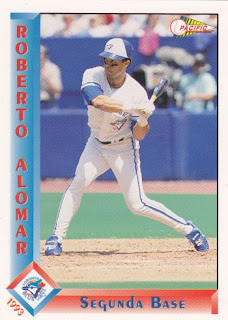 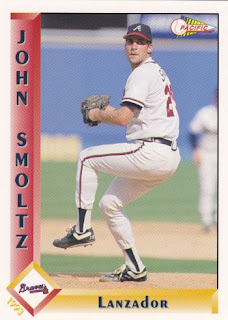 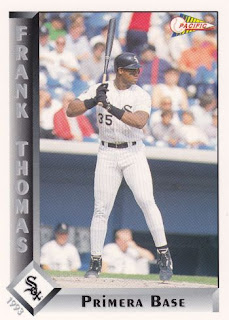 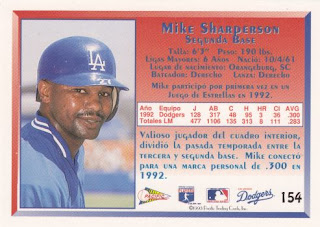 154 - Mike Sharperson (Here's the first clunker. You can see what the card backs look like.) 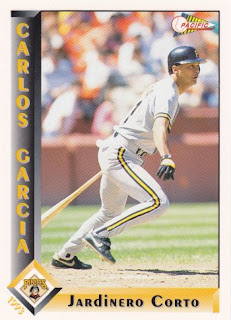 244 - Carlos Garcia (Incidentally, I would have gotten clever and written this post in Spanish like some others, but my Spanish is pretty horrid for someone who took four generally A graded years of high school courses in the language. Of course, that was a long time ago...)

Funny Thing, Pacific reused its 1991 Football design for this set

I could really use that Smoltz card if it's available. Please let me know! flywheels@yahoo.com