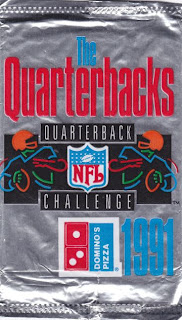 Monday Night Football is in full effect tonight, so I figured it was time to show off a football pack from the big junk wax giveaway/party. These were part of a promotion during Upper Deck's first foray into NFL cards as a special set where packs were only available with purchase of a certain pizza order at Domino's. I was more of a Little Caesar's guy in high school, thanks in large part to their price point and crazy bread, so I didn't get any of these packs myself. I remember seeing them at card shows, hoarded by dealers who had either had really disturbing pizza-eating habits or just had connections with minimum wage-earning teens. 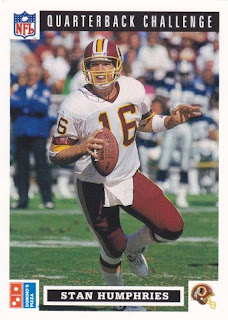 30 - Stan Humphries (Humphries' inclusion in this set shows its limitations - only quarterbacks are involved. I would have loved, for example, a Domino's-related card of William "The Refridgerator" Perry.) 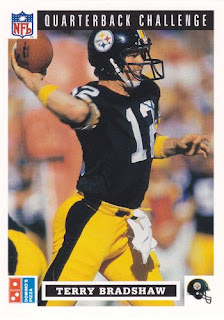 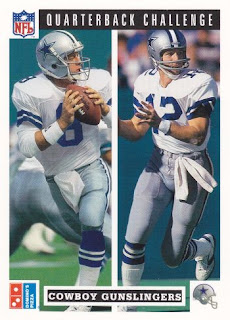 47 - Cowboy Gunslingers (This is probably the ultimate card to get for a Dallas Cowboys fan, which I am very much the opposite of. Roger Staubach and Troy Aikman are featured here.) 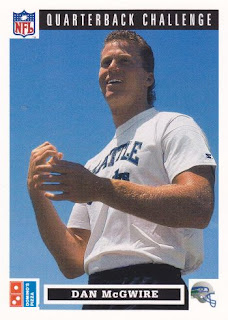 28 - Dan McGwire (Like Ozzie to Jose Canseco, Dan McGwire was prolifically crappy, only at an entirely different sport than baseball. He wasn't Mark's twin, either, but was younger by a few years.)

Dan McGwire....lol...I have a bunch of his Score football cards. I should just burn them or include them in the next package I send out....lol.

That might be a good set to collect if you liked Domino's pizza. The Bradshaw and the Cowboys card look nice.

A pile of Dan McGwire junk wax (is there any other kind of wax for McGwire?) sounds like a perfect candidate for a serious bipping on a Seahawks fan.

I remember at the time how excited everyone was in the region when the Hawks got him, because hey, how can he miss with that last name?

Well, by a lot actually. I think the stink he put in the Kingdome is the real reason they demolished the place.

if someone was to have this card(the cowboys gunslinger#47 with troy aikman and roger staubach).... what would it be worth to u mr madding?

What would the card 'Cowboy Gunsligers #47' Be worth to you Mr. Madding!

yes how much because i have the card