Written by Community Gum at 11:57 PM
I'm back with another pack from my first ever Community Break. Just like before, you can find more of the inserts and my full review here. 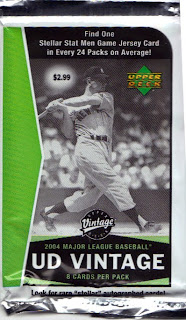 This here's the retail version. That means no Old Judge and no Black & White parallels. Also, as I'll learn, no quality control (although that may have carried over to Hobby as well). 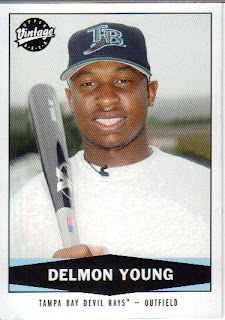 #111 - Delmon Young - No MLB Experience for Young up to this point. It makes for quite the blank card back. Just hold your bat and smile, kid. You'll get in a few games. 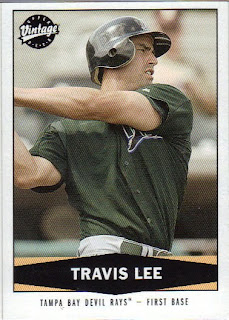 #150 - Travis Lee - back to back Rays. I wasn't really following the sport for a while, and I really don't follow AL hardly at all, so I can't say I know this guy, but he looks like a capable number 6 hitter from what I see on the back. 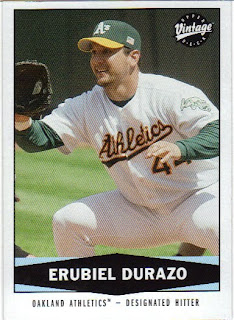 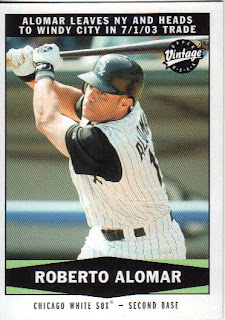 #334 - Roberto Alomar - This would be a short print. Even though the card says White Sox, when I read "heads to Windy City," my mind immediately asked itself "Roberto Alomar played for the Cubs?" 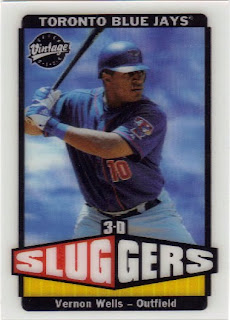 #363 - Vernon Wells - 3-D Sluggers - Here's another Short Print, although, it obviously should just be an insert. These fall 2 per box. You'll have to check my review to see the other guy I got. 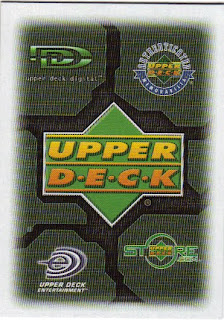 Freakin' stupid dummy card system pissing me off. Throw away your own garbage, Upper Deck! 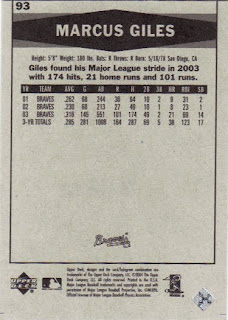 #93 - Marcus Giles - Here's what I learned from my box. Every single card that came after the dummy card was miscut on the back only. The fronts looked completely fine, but you can see on the backs of every card after that mark, that the backs are jacked. Look close at the bottom and you can see the markings where it should have been cut.

If anyone out there has any knowledge about this set, please let me know if this is an issue across the entire production run, if it's just retail, if those cards appear in the front of some packs to correct the issue, or what the hell is going on? 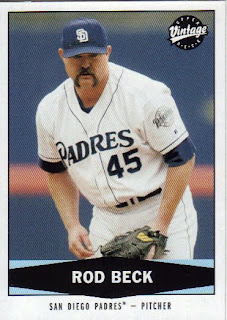 #51 - Rod Beck - Beck looks very, very creepy in this photo. Where did the white in his eyes go? I'd show you the miscut back, but I didn't want to deny anyone the moustache. 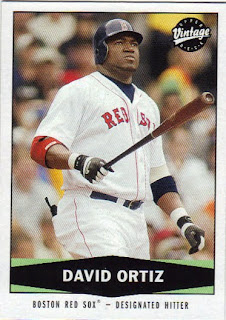 #209 - David Oritz - The last miscut of the pack. I assume those are batting gloves in his back pocket, but it kind of looks like a walky talky. Hopefully the manager has the other one to tell him to run his butt to first, instead of admiring that smacked ball.

I like this set, but I hate that so many of these cards suffer from the faulty alignment. I'm willing to give a different year's Vintage a go, but this year's could have been so much better without those problems. If you know what went wrong or anything else, please let me know. I'm very curious.

Yes, Delmon, please hang on to your bat. Don't ever let it go. Don't let it hit an umpire or anything, kid.