Written by Community Gum at 10:51 PM
This sucker was part of the Community Break that I held not too long ago. You can find scans of all the inserts over here on my full review. Still plenty of cards available for trade. 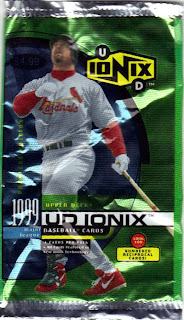 It's tough to see, but these originally had an SRP of $4.99 for a 4 card pack. I suppose that makes sense, what with this being essentially a Topps Chrome rip off and all. Still, this would have been unheard of for me back then. I still have trouble dropping that kind of coin on so few cards. 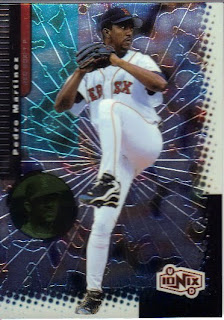 #14 - Pedro Martinez - I imagine that at this point everyone had forgotten about Ramon and made Pedro the hot Martinez. His numbers certainly show that should have been the case. 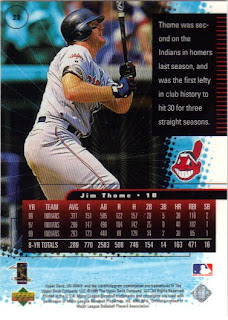 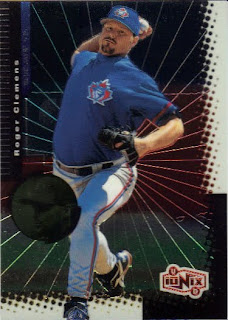 #59 - Roger Clemens - Chu Chu Rocket here is sporting the evil twin look. Isn't this also around the same time that all the hullabaloo started? Coincidence? 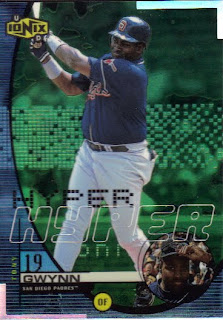 #H12 - Tony Gwynn - Hyper - And an insert to close it out. Who doesn't like Tony Gwynn? The back touts his career .339 average and 2928 hits. I can't imagine Tony getting hyper, but it ain't a bad day when you pull an insert of one of the good guys of the game.
It's an okay set, but not my favorite by any means. It was still nice to bust something that would be considered a little higher end back then at a fraction of the price.

I'll be back with more representative packs from the rest of the products opened for the group break, but check out the ol' blog in the meantime to see if there's anything you want to trade for, since most teams were not taken.