Written by Collective Troll at 8:18 PM
Welcome to a rip of 1991 Topps Stadium Club Series 2 Baseball. 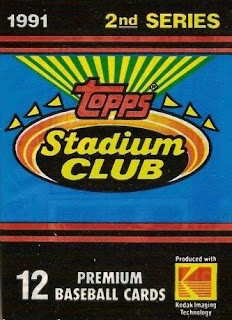 I believe this was the first year for the Stadium Club Premium series from Topps. Crisp and clear photography, glossy finish and my favorite thing, the photo of the player’s Topps rookie card on the back. Here is what we got: 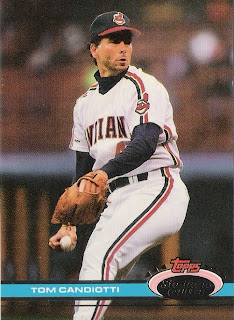 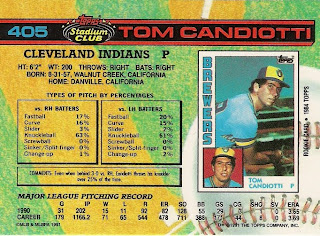 Like most knucklers Candiotti pitched past 40 and won 151 big league games. 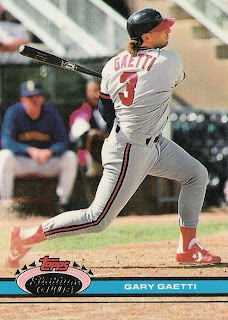 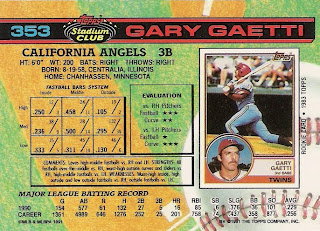 The Rat won a World Series ring, 4 Gold Gloves and hit 360 homers over his 20 year career. 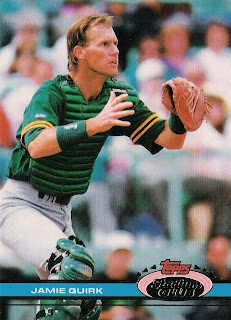 Card #573 of Oakland catcher Jamie Quirk. I had no idea how long this guy’s career was… 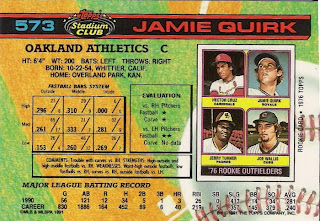 He played in 984 games over 18 years and after being a first round draft pick in 1972, Quirk found himself on a multi-player rookie card in the ’76 set. 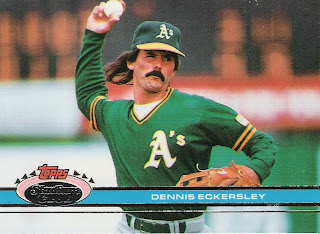 A player with a slightly more famous rookie card from 1976 appears on card #332 in this set. 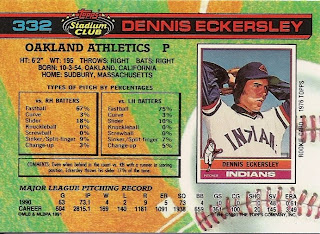 Featured is Quirk’s teammate on the A’s, Hall of Famer and current broadcaster Dennis Eckersley. 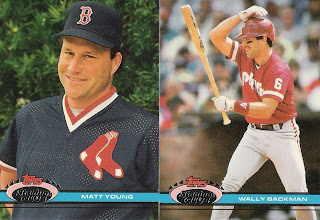 The next 2 cards are #426 of pitcher Matt Young and card #368 of current Brooklyn Cyclones manager and ’86 Mets second baseman Wally Backman. 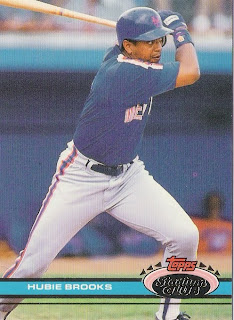 Card #325 is of another former Mets infielder and favorite player of mine as kid, Hubie Brooks. Flipping the card shows one of the first rookie cards I ever bought, his 3 player rookie card that also shows Mookie Wilson and Juan Berenguer from 1981 Topps. 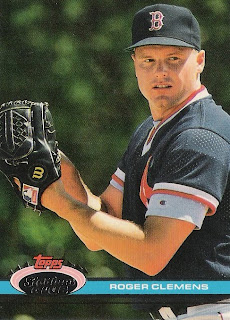 Next up is card #309 of Red Sox starter Roger Clemens. The back shows the Rocket’s ’85 Topps rookie card which I was certain was going to finance my future… 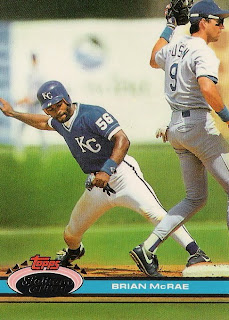 Another former favorite player, a friend and neighbor of mine, Brian MacRae appears on card #478. 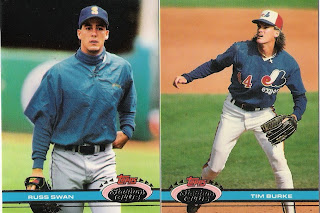 Two more cards are #577 of Mariners pitcher Russ Swan and #51 of Expos pitcher Tim Burke. Burke and his mullet were All Stars in 1989 when he went 9-3 with 28 saves for Montreal. 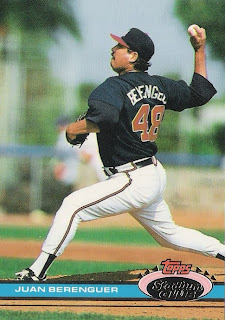 The 12th and final card out of this pack is card #460 of Braves pitcher Juan Berenguer. JB was 8-1 for the ’87 Twins and he won a ring with them. He was one of the 3 Mets prospects featured on Hubie Brooks rookie card from ’81 Topps but the back of his card shows his real rookie card from 1979 Topps.
All and all it was a decent pack. One Hall of Famer and a few childhood faves of mine. Great photography as promised – I was pleased with this one. Go Rays! Troll out.

Jamie Quirk had one at bat for the Indians - and it was a game winning homerun in the bottom of the 9th that helped them beat the Twins and helped the Royals clinch the AL West. How about that?

I was thinking the exact same thing when flipping through a few of these the other day--the back design with the player's rookie was a nice touch that's hardly ever been repeated. While the overall designs generally got better as TSC made more sets, that's probably still my favorite feature.

Still a great looking set. I should consider trying to put this together if I ever get some of the other sets I'm working on completed.

I had no idea Gary Gaetti had that many homers. That is a great Eck card by the way!