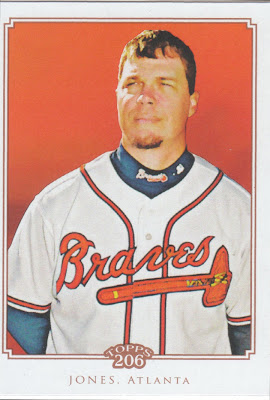 Chipper Jones No. 184
It is really unfortunate that he's injured. Hats off to Bobby Cox and Chipper Jones for being with Braves for so long. Even though I'm not a Braves fan I was pulling for Chipper to have a nice exit to his career, so hopefully he comes back next season. Seems to me that he's one of those guys that played in the steroid era, but was happy enough to be playing ball and wasn't greedy. I hope I'm right. 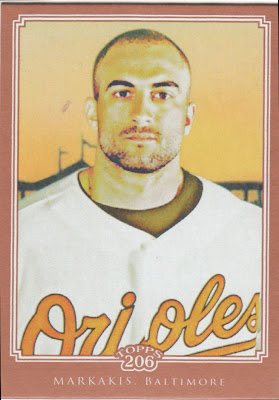 Nick Markakis No. 56
One of my favorite players, but when is Baltimore going to have a respectable squad? Buck Showalter should help in the next couple years. 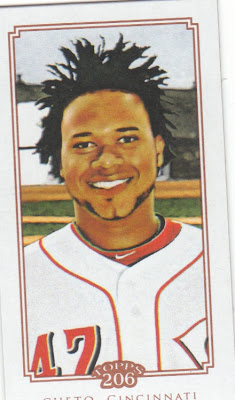 Johnny Cueto Mini Polar Bear No. 192. One of the many young Reds pitchers they have over there. 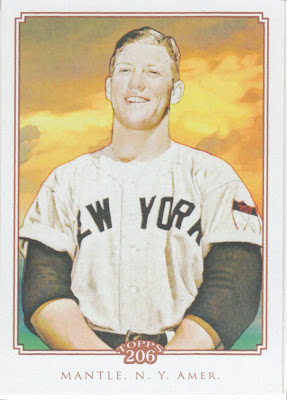 Mickey Mantle No. 91.
Interesting fact on the back of his card; His first annual MLB salary was $7,500, his last was $100,000. Now that's what I call a pay raise.
(Not pictured) Hideki Matsui No. 251.
The Mantle and Chipper are my favorites because I like the background. The other ones are just too boring. I usually like these older feeling cards, but these are just too basic for me. The back also has barely anything on it. Very lackluster effort by Topps.

What's with Cueto's hair? That's one of the reasons I don't care for the no-hat pictures. Just my two cents.

The entire set of hatlessness is worth it just for Cueto's epic hair.