Written by shoeboxlegends at 9:13 AM
Early 1990's Fleer Ultra hockey is near the top of my all-time favorite junk wax list. I grabbed three packs of 1993-94 for $1.50 each last time I was at the hobby shop. Here's the best of the three: 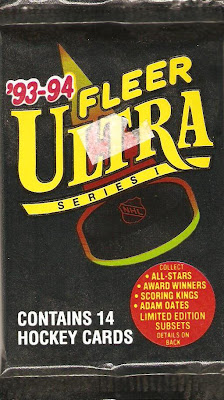 As you can see each pack contains 14 cards with a shot at All-Star, Award Winner, Scoring King and Adam Oates insert cards. 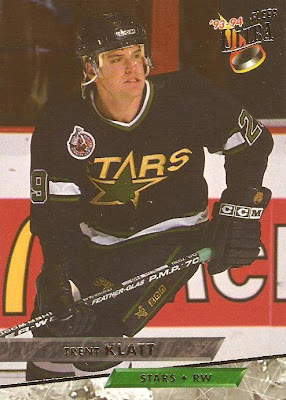 #157 - Trent Klatt
1993-94 was the first season for the Dallas Stars, formerly the Minnesota North Stars. 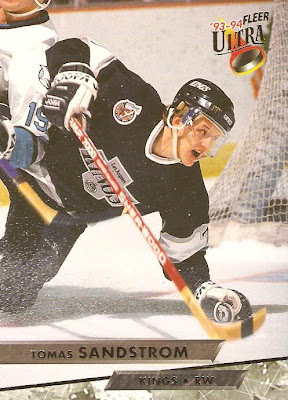 #246 - Tomas Sandstrom
The design for this set is not very different from its 1992-93 predecessor. Both have the Fleer Ultra "streaking puck" logo in one of the top corners. In the 92-93 set the background area on the bottom of the card was close in color to a sheet of ice, in 93-94 it's gray. There are some other minor differences with respect to how the player and team names are laid out but all in all the sets look very similar. I'm biased but I think it's a great design. 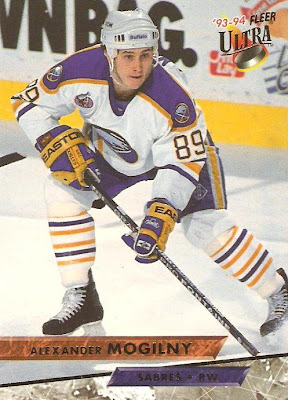 #238 - Alexander Mogilny
One of my favorite players as a kid. I bet if you checked a Beckett hockey from 1994 this card would be listed. When this set came out Mogilny was coming off of a career season in 1992-93, where he scored 76 goals and 127 points. He'd finish his NHL career with 473 goals, and over 1,000 points, averaging greater than a point per game. This guy was "Alexander the Great" before Ovechkin was. Believe it or not there are 4 more 1,000 point scorers coming in this pack. 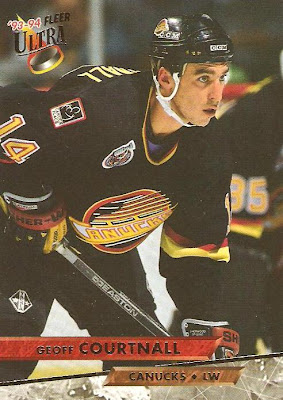 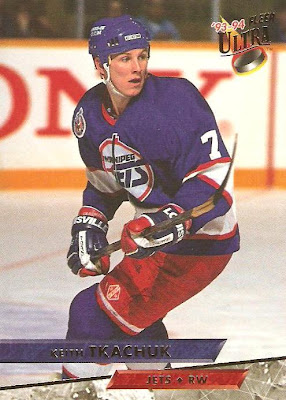 #111 - Keith Tkachuk
Keith grew up in my neck of the woods, attending high school and college in Massachusetts (Boston University) before being drafted by the Winnipeg Jets. He reached many milestones in a long and successful career in the NHL, including 500 goals, 1,000 points and back to back 50 goal seasons. 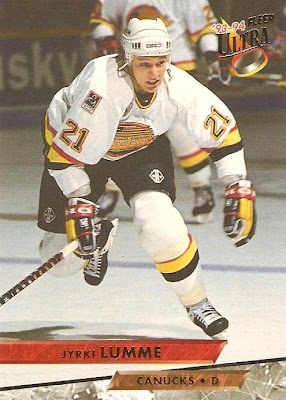 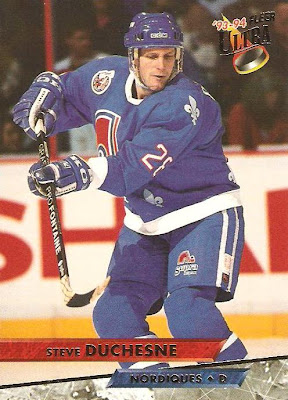 #7 - Steve Duchesne
A Jets and a Nordiques card, if only I pulled a Whaler I could've completed the trifecta of cities who lost their NHL teams. 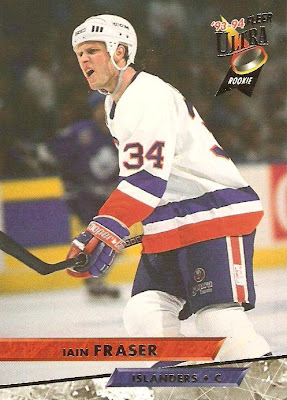 #73 - Iain Fraser
Rookie cards had an additional gold foil ribbon beneath the streaking puck logo. I was fortunate enough to pull Iain Fraser, who appeared in 94 career NHL games. He seems like someone who loved the game though, because he played 3 years in the AHL before even sniffing a pro roster, but more importantly after seeing his final NHL game in 1996-97 stuck around for 10 more years in various European leagues! 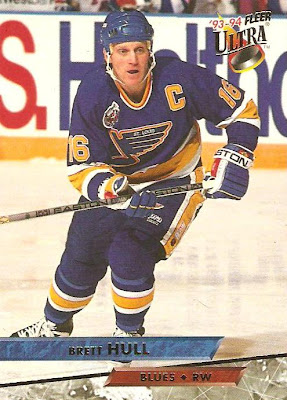 #117 - Brett Hull
Hull had just finished a string of 4 consecutive 100-point seasons ending with the 1992-93 campaign. Believe it or not they were the only 4 of his Hall of Fame career. I write "only 4" like that's nothing, but to me it was surprising. It would be a shame to write a post on 93-94 Ultra without showing the backs: 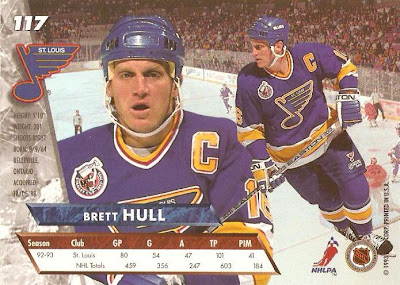 True, there's only one season of stats but these were done pretty well. I'm pretty sure the background photo of the hockey game is identical on every card, but you get two more unique player photos rather than the photo from the front recycled. Also, the card number is very clear so it's easy on your eyes when you're sorting. 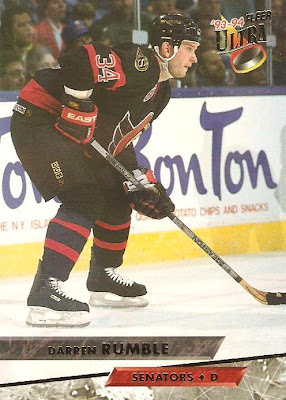 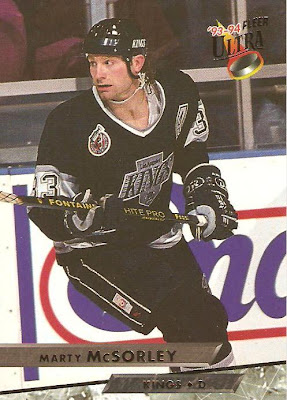 #227 - Marty McSorley
Snapple fact: The average human will eat an average of eight spiders while sleeping. 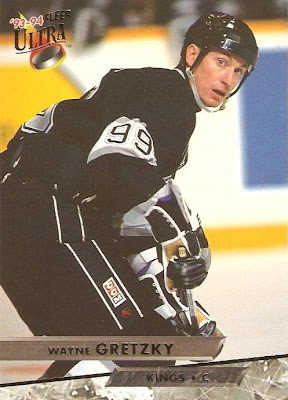 #114 - Wayne Gretzky
Can't do much better than that! Pretty funny pulling Wayne's bodyguard then Wayne back to back. Gretzky led the league with 130 points in 1993-94, and took home the Art Ross, Lady Byng and Lester Patrick trophies. 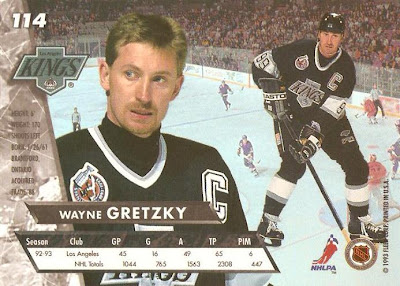 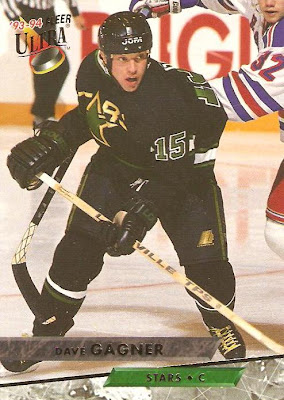 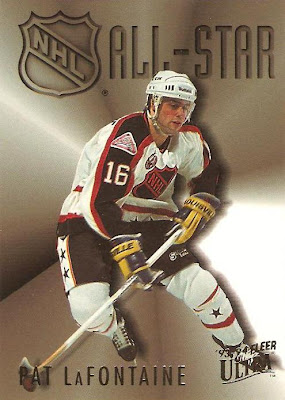 All-Star Insert - #4 - Pat LaFontaine
Fleer Ultra had some really great inserts in its first few sets, however this one was a miss in my book. It's not terrible, it's just not much of anything. A knee injury sidelined LaFontaine for all but 16 games in 1993-94, which was a huge disappointment given that he was widely regarded as a top 10, maybe even top 5 player in the league at the time of the injury.

I'll take that over a pack of 2011 Heritage any day. If you want to see a few more cards from my other two packs you can check them out here.

I really like the old Fleer Ultra Product. In my sealed wax box collection I have 92-93 series 1 and 93-94 series 2! Great looking cards! Pretty popular back in the day when they came out! The Roenick signature out of the 92-93 series was a big card in it's time!

I just opened several boxes of 93-94 fleer ultra and pulled an Adam Oates auto. Does anyone have any info?