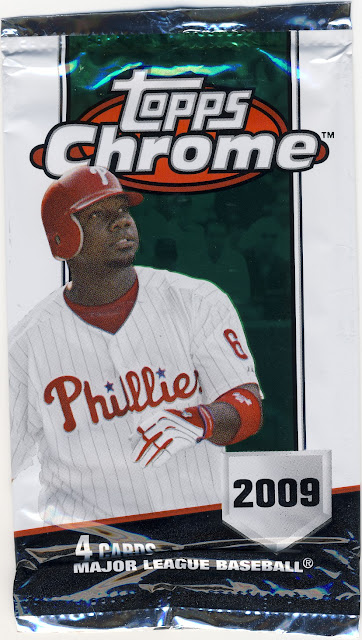 I could open these packs all day long...It's a nice way to start the work week....and we begin with a Padres rookie.    Silva pitched for the Padres for six games in 2009 and has been in AAA since.


Over his career Rolen has averaged 26 home runs and 104 runs batted in with a .285 batting average.  I would say another five years and he's got a pretty good chance of having some Hall of Fame consideration.


This pack is a winner for me just for another X-Fractor to add to the collection.  Each year the refractors are a little different as far as square sized used and the ability to see them...I think 2009 Chrome got it about perfect.
I really didn't understand all the shock and awe that occurred when it was announced that Derek Jeter has the best selling jersey.  To me the bigger story was that Albert Pujols was as low as number 6 behind the likes of Chase Utlely.

I'd consider that a really good pack.

It's probably got something to do with the endless supply of "pujols" (say it outloud) jokes that d-bags can tell.