Written by Community Gum at 6:57 PM
Since I'm a semi-regular contributor to this blog, it's only right that I use my recent group break to pad the listings on here. What good is it to open a pack without contributing to the cause? So, I'm going to be featuring one pack from each of the seven boxes I opened for the group break. In each case, this will be the first pack seen on video. That means, if you've already watched, then you know what's coming. 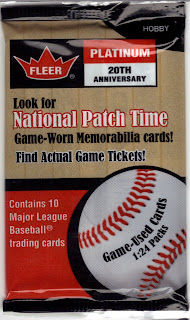 I have an idea! Let's look for National Patch Time Memorabilia cards! Together! 10 cards in each see-through pack. The cards were removed before scanning, obviously so you couldn't see... 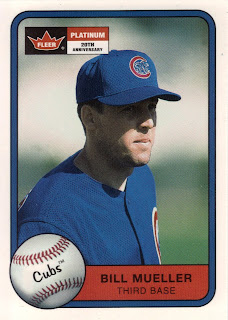 ...#3 - Bill Mueller - I know you'd jump at the opportunity to buy this pack with Mueller peaking out from under the wrapper. It still remains to be seen if it was a smart idea to jump or not. 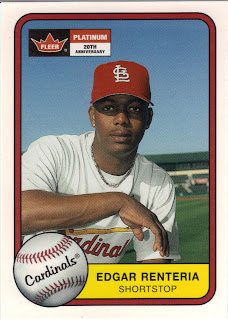 #22 - Edgar Renteria - What is your arm resting on? It looks like it's resting on either the ball on the card, or on the fake bat from his jersey. 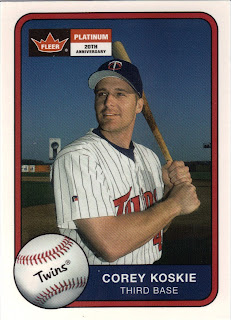 #39 - Corey Koskie - Oh, by the way, these are mimicking the 1981 Fleer design for the 20th anniversary. And now I've used up my useless tidbit I saved for when there's nothing else to say about a card. 3 cards in. Great. 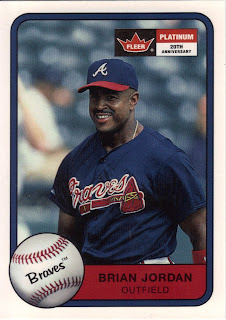 #232 - Brian Jordan - I prefer my Jordans to have the first name of "Michael," thank you very much. 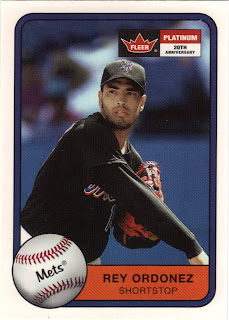 #183 - Rey Ordonez - I wasn't following baseball back in 2001, so a lot of these players mean virtually nothing to me. I know that this guy must have had at least a little talent, since I remember seeing a blogger's want list posted at one point. 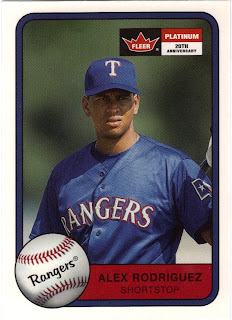 #40 - Alex Rodriguez - Here he is again. Showing up in both of the first packs. I used to root for him to beat Bonds' Home Run record. Now I have to rely on Pujols, and I hate that idea (until he signs with the Cubs next year). #13 of 20 GG - Mark McGwire - Grandstand Greats - Back to back juice. I like the rounded corners of these inserts, but the gold foil seems fragile, as if it'll scrape off in a normal stack of cards. The stadium in the back should be the player's home turf. I'm not good at my non-Wrigley parks to know what is actually pictured. 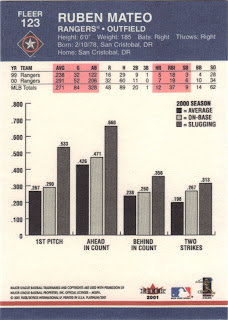 #123 - Ruben Mateo - Finally, a look at the card backs. Before there was Microsoft Excel, there was 1981 Fleer card backs. All the in depth analysis and bar charts you could ever hope to find. As a kid, I never paid any attention to these whatsoever. They all looked the same to me. 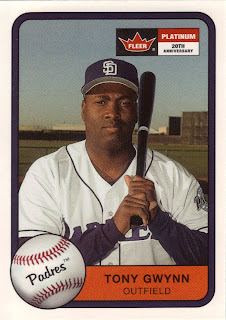 #140 - Tony Gwynn - Hot damn! I'll save my thoughts on this card for when I post my group break personal collection haul. I still need to get my Gwynn want list together, but I can assure you I did not have this card before. 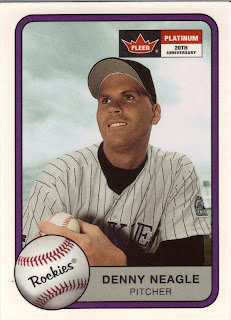 #155 - Denny Neagle - Yowza! There had to be a better picture to use. There just had to be. This card will haunt me in my sleep. I'd burn the card, except A) it's going to Cards from the Quarry who claimed the rockies and B) if I did, it would probably regenerate itself and multiply just to spite me. 2 of 7 boxes down on this front now. To see what hit(s) were gained from the rest of the packs in this box, head on over to my blog. There were several unclaimed teams that are available for trade.

The backs are more reminiscent of 1987 Fleer, except for the graphs. The graphs aren't 1981 Fleer or any other year.

this was a really nice set when it came out and still is. The base card design is really nice and I believe the big RC's to pull from this product were Mark Prior and Josh Phelps.