Written by --David at 6:55 PM
The other day, I ran into Wal-Mart to pick up a beginner's amp for my son (who is learning how to play the electric guitar) and I decided to grab a pack of wax.  I saw these 2011 Heritage sitting there and thought, "why not?"  Perhaps, I should have asked myself "Why?" instead.

Now, before we go too far, let me say that I love the design for these: Classic 1962 Topps.  I think I'm just mad that I didn't get any Indians nor did I get anything that made me jump and down, giddy with excitement.

First up, each pack features 9 cards.  The cards are printed on stock slightly thicker than the days of yore, but they still manage to have a nostalgic touch.  The wood grain and curled photo are a blast from the past, giving "Heritage" a rightful name.  The photos are a bit washed out, overexposed, whatever, just like the ones found in '62.  Above, we have Xavier Nady (Diamondbacks), Tim Linecum (Giants) on a three-photo progression card, and Chris Sale (White Sox) with the "star" rookie emblem.

Here, we have Alcides Escobar (Royals), Drew Stubbs (Reds), and Jarrod Dyson (Royals).  Wow, really? Two Royals in one pack?  Well, maybe they will find a home one of these days.  The Dyson looks like it stepped out of the past with the low-angle shot and hand-in-fist pose.

Last in the pack, we have "Babe and Mgr. Huggins" on a "Babe Ruth Special" card.  Was this card in the original set of '62?  That'd kinda cool if it had been.  Next, Buck Showalter (Orioles Mgr) without a team checklist on the back.  Seriously, am I the only person that misses those?  I'm starting to think so.  Finally, Chris Young (Diamondback) rounds things out.  So, a pair of Royals and a pair of Diamondbacks in a single 9-card pack.
The backs of the cards are also classic '62 with the baseball icon for the card number, orange-ish tinted coloring and blast-from-the-past font styling with cartoon and captions: 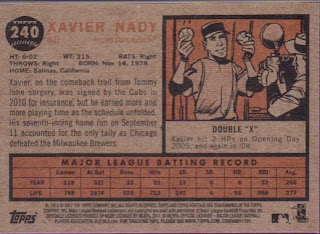 Like I said, I actually like the design of this year's Heritage cards.  I just wasn't thrilled with the pack I pulled.  But, what makes this hobby so addictive is the thought of plopping down 3 bucks for another pack to see what comes next.

I'm going to buy a few packs simply because of the Lincecum card. I'm not wild about the comic sans font, but I think the conception of the idea is cool with the progression of his throw on one card. I haven't seen any around here though.