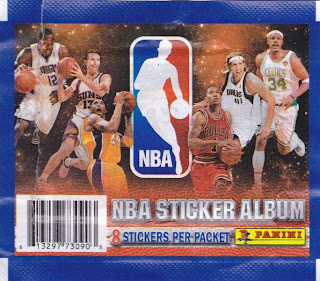 Here's a new product, or at least "new to me" product, that recently hit the shelves at the local big box store. I'm really tempted to go all out and buy a box and a sticker album especially considering that you can buy these directly from Panini and get free shipping. Of course, I'm not all that convinced that you're saving a lot of money that way when a box costs only $1 less than it would to buy packets individually in a store. I have a feeling these will disappear from shelves soon as most basketball stuff seems to. I'd also be more encouraged to go all out for this if I knew other people who were trying to put together an album, but I've had a hard enough time finding people to take any of my basketball stuff off my hands. 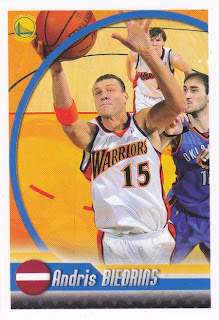 273 - Andris Biedrins (I'm guessing there's a special international player page or two as this looks different than most of the stickers and features the Latvian flag symbol on the front.) 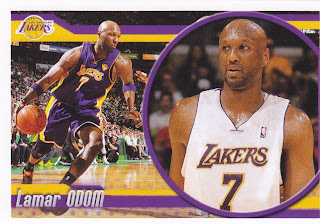 297 - Lamar Odom (A Laker. That's no good. White jersey Odom looks confused by the presence of purple jersey Odom for some reason.) 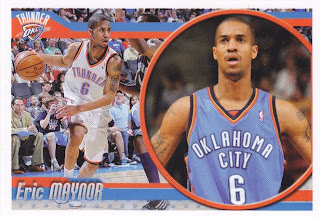 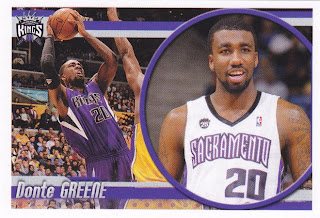 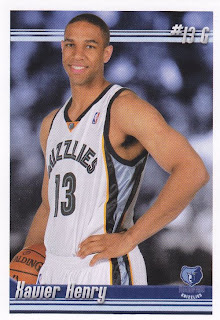 360 - Xavier Henry (I believe Henry is a rookie. The design is different here, too, as you see that he gets his position and # on the card.) 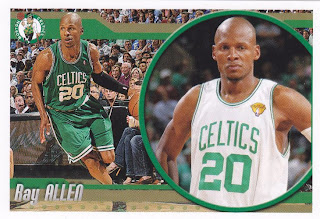 9 - Ray Allen (Allen has an NBA Finals patch on his home jersey.) 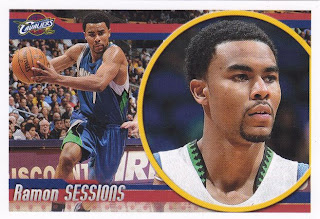 76 - Ramon Sessions (Panini isn't shy about showing players with their new teams, but the photos of Sessions are with his old team - Minnesota.) 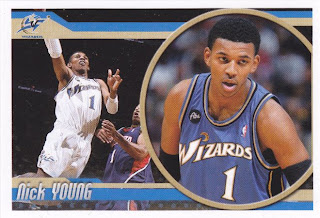 160 - Nick Young (Finally, here's Nick Young. The Wizards are next up for my Portland Trail Blazers. Washington has a truly astonishing road record of 1-31 this year, with 10 of their last 14 remaining games to be played away from home. A Blazer loss would be really upsetting.)

I wrote up a post on the stickers and the album on my blog a week or so ago. I love what Panini has done with these and I plan on trying to fill up my album. If you want to do some training just let me know. Oh well, a care package is in the mail to you as we speak.

I'll also be trying to complete the album. I've been looking for these for a month before I found it. I bought 20 packs with my album when I finally did. I'd also happily take any Bulls and/or 1995-96 season inserts off your hands.
--JOn

I am still willing to take any Lebron James cards off your hands since I am the only Lebron fan left in Ohio!