Written by dayf at 1:08 PM
I picked this pack up at a new card shop I found for a buck with the intention of videoing the pack rip. I went a different direction with the video, but I wish I had gotten this rip on film video digital bits. I've been spooked about posting packs online since this debacle and this one's going to raise some eyebrows. I swear on my mother's eyes that I just picked this pack out of a dollar bin at random for the sole purpose of posting it online because, really, who the hell has ever put a pack of this stuff online before? Believe me or not, but this pack is totally legit. 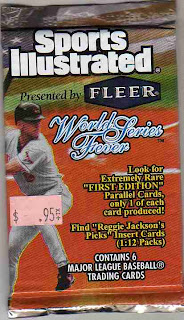 Fleer is the card manufacturer I've mourned the most after its passing, even though Upper Deck is still trotting out its zombie corpse in their hockey products. Fleer base brand was solid, You always know what to expect with  Ultra and they had some cool products like EX sprinkled in here and there. There was a whole lotta buncha crap too but when Fleer had it going on it was damn good. Sports Illustrated was a damn good product that was really underrated. The photos, while not actual Sports Illustrated good, were good. It was printed on thick, sturdy, glossy cardstock. The design, well it was the late '90s,  but it wasn't too bad considering the era of insane designery it appeared in. Part of the reason the set isn't remembered fondly is due to the fact that Fleer - as usual - had no idea what the heck to do with its oddball sets and made changes to the set all through its 3 year run. It started out as a premium style set meant to complete with stadium Club with SI photography, had three different incarnations in 1998 and finally ended up as the first "Greats of the Game" set complete with autographs in 1999. The Greats line went on to do well, but SI was dead after that release. This one here is the third SI product from 1998 and was put out more or less to coincide with the '98 playoffs. Let's take a gander. 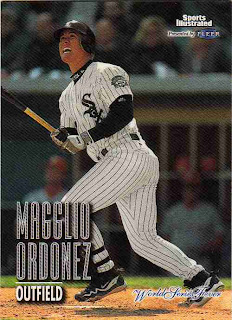 The name is a tad large and there's one too many product logos but otherwise it's a nice clean design with some decent photos. Looks like Mags got sawed off on this one. Here's the back: 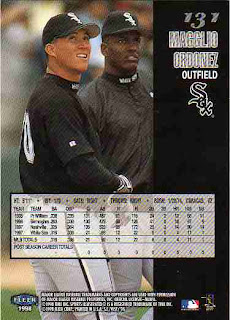 Not a bad looking back design. The picture is large and different from the one on the front. Mags is sharing his back with - who is that - Ruben Sierra? The number is easy to read on the black sidebar complete with name and logo. The backs also have full career stats including minor leagues in some cases. Ordonez played in Nashville in 1997, and I'm pretty sure I caught a Sounds game where he played. I wish I could find the program now to see if he's in it. 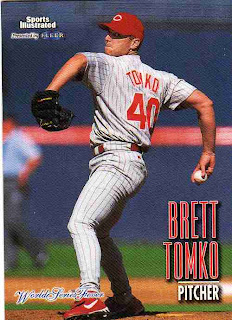 Like Mags, Tomko was a rookie in 1997. Is Brett still in the league? Too lazy to check. Ok, here's where it gets weird. 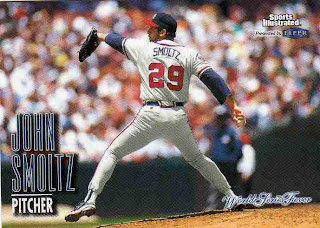 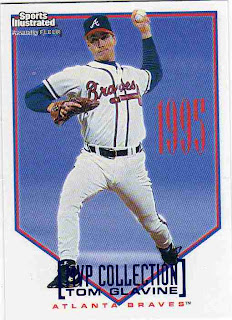 Boooooo! there's no way I could have randomly pulled that! Out of junk wax from the late '90s! that I only bought to post online! Boooooooo!

I SWEAR THIS IS TRUE. I BOUGHT THE PACK ON A WHIM SOLELY TO POST IT ONLINE SINCE IT IS SO ODDBALLY AND I LIKE THE SET. I'M KICKING MYSELF FOR NOT VIDEOING IT. 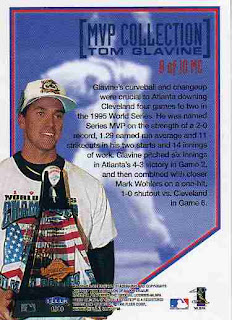 In my defense this is the easiest insert at 1:4 packs and with a ten card set, it's 1:40 for any particular card in the set. That's not really winning the lottery odds there. If the next card in the pack is Greg Maddux, I give you all permission to drive to my house and kick the crap out of me Jay & Silent Bob style. Other insert sets:

Reggie Jackson's Picks 1:12 packs - Reggie Jackson picked 15 players who he thought would one day would perform in the World Series.

Extra Edition - Parallel set numbered to 98. There's also a First Edition parallel numbered 1/1, back when such a thing meant something. 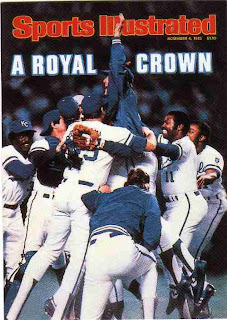 Yay! No Maddux! I don't get beat up! These SI covers are the best thing about these sets in my opinion. If Sports Illustrated put out a set of nothing but their covers from the first with Eddie Mathews to the latest issue, I'd buy it. Hell, I'd subscribe for that. Make it so, SI! 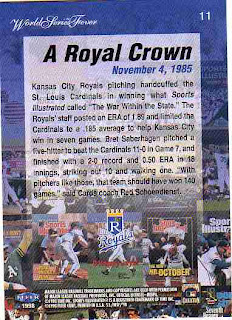 Awwww crap. Half of the Braves' SI Championship cover is on the back on the bottom right corner. Maddux was on that cover. I guess I get beat up after all. 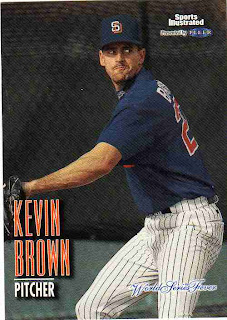 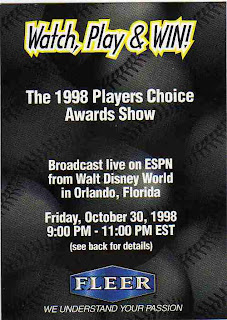 Here's a crummy advertisement for the 1998 Players Choice Award Show. It is printed on the same weird textured stock that Fleer used for a few of its inserts that year. The back is interesting: 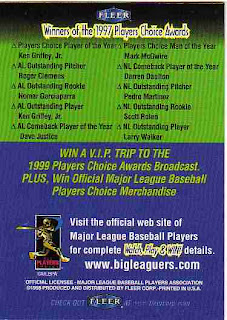 This is a pretty early example of a card with an internet address on it: www.bigleaguers.com I don't know how the contest works, you'll have to click on the link to find out.

So there's my return to posting pack rips. It may be the last that I open online without getting video evidence.

So where is the Chipper card? I don't get it.