Written by Todd Uncommon at 3:50 PM 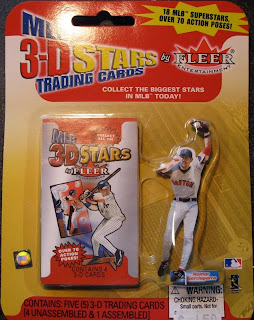 Hey there, this is a long-time reader, sometime commentator, and a first-time poster!

I figured that I would kick off my contributions to APTBNL with something a little unusual. I picked up this pack from a local hobby store recently. I'm sure that it's been in the store for 3/4 of the past decade, waiting for me to pick it up on the cheap.

Back when the world was slightly more analog seven years ago, Fleer attempted something new with 3D constructible major league players, long before Topps' foray into augmented-reality with its "3D Live" product feature.

Much like how the formerly Topps-owned WizKids produced the Pirates of the Spanish Main CSG from 2004-2008, Fleer pre-dated that a year earlier with a similar polystyrene product. You would punch-out pieces to assemble 3-D players, like a higher-tech paper doll set. I remember picking up a pack of these to try them out about seven years ago, and upon seeing this unopened pack, it was screaming to be opened here.

Each pack contains four unassembled cards, one assembled card (presumably to illustrate what you're getting), and a checklist insert. The backing of the pack is about 5 1/2" x 7 1/2", and each individual punch-out card is about 2" x 3 1/2".

It's hard to tell which is the card front. The checklist has them numbered (to 72), but there are no numbers printed on the styrene cards. Argh. Another instance of poor product coordination. If I were putting this set together, I'd have to figure out which player poses I had to go with which uniform to put a complete set together. Without the checklist as a road map, a collector would be dead.

So, assuming that the card front is the one with the player's name on the base, this pack contained:

The card backs of the same:

Some interesting notes about these cards:
These were a pretty interesting idea, and a little ahead of their time. However, with all the struggles that Fleer was having at the time, it's another instance of a pioneering product not getting its time to shine.

So, what's the fun of opening up these kind of cards, and still leaving them as disembodied parts mounted in their little frames? How about a little baseball vignette? 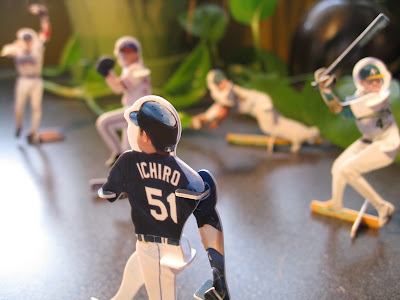 Makes a nice little desk diorama, does it not?

Hmm. I'll have to see what kind of real Franken-card I can make from all these parts...