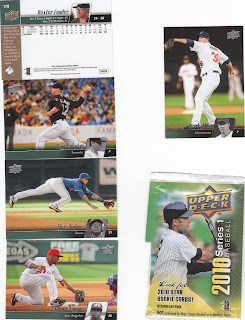 It's true. 2010 Upperdeck baseball, bought 'em at Target for the typical $3, But Notice the bottom of the pack reads: NOT authorized by Major League Baseball or its Members Teams. Hmmm... that explains why it only refers to the city where each person plays, but it pretty much looks like the same ol' Upperdeck. 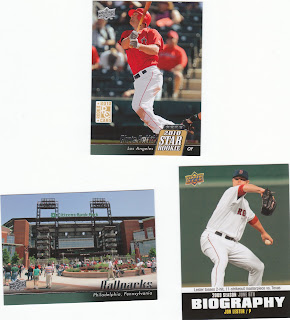 There's a rookie card, doesn't use the typical rookie logo. There's a ballparks card that I assume is 1:1. Tells about the history of the ballpark, I think that is pretty cool. The spectacle of a stadium is often lost in the world of sports. Then a Biography card of Jon Lester shares June 6th, 2009 of his season with us as he threw a 2-hit 11K "masterpiece" against the Rangers...I mean "Texas". 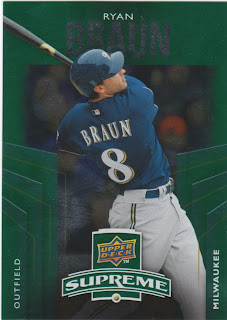 Upperdeck, you sure now how to keep a guy coming back. Yeah that's an insert of my favorite player, Sweet! I gave you a chance Topps, but you failed to produce a Ryan Braun card in four packs, Upperdeck comes through with an insert, in the first pack. To quote the fella's at ESPN, "C'mon Man."

Damn Camclow, I just finished writing my pack break on these and when I went to post it, you already got them up... Beat me by twenty minutes! What is also funny is I pulled a David Price (from my fav team) in the one pack I bought. I actually thought they did a GREAT job making cards without logos, etc. Nice write up...

The Hebrew Hammer is close to my favorite pull. I had a topps blaster without a brewer in it, and am not sure I will buy this stuff...feels alot like UD Draft football which I hate. I am salivating for Joe Collectors 5box ultimate break.
C'mon Hammer...

Yeah I was pretty pumped to get a Braun insert, but I agree. The feel of these cards is for some reason unprofessional. It's also kind of hard to make out the names on the base cards. And the fact that you know they are not licensed by MLB makes you wonder what the verdict will be on these in the future.