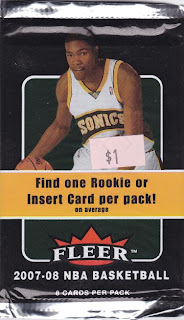 Remember the Sonics? I do. I think it's pretty lousy that they were taken away.
Here's some cards of the basketball variety. 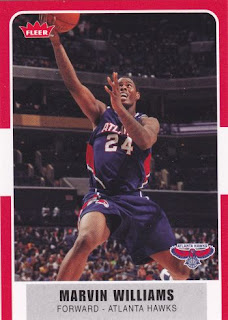 85 - Marvin Williams (Right off the bat, I have to say that I really like the design of this set. I can't really say the same about most of the Fleer stuff I've seen since Upper Deck took them over or bought them out or whatever they did. It reminds me of classic late '80s Fleer designs.) 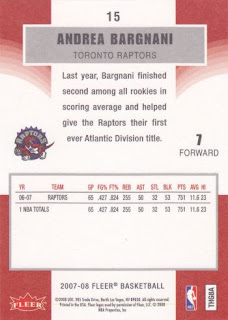 15 - Andrea Bargnani (The backs are a pretty simple but classic design.) 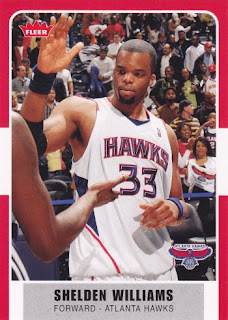 86 - Shelden Williams (I always seem to get Hawks in the packs I buy these days. I just end up sending them to this guy.) 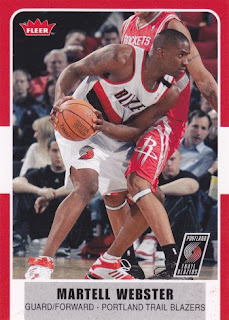 116 - Martell Webster (Marty! Well, just when Webster was starting to show some consistency with his game for the first time in his career, he's started to pull another disappearing act which has coincided with the return of last year's starting small forward Nicolas Batum.) 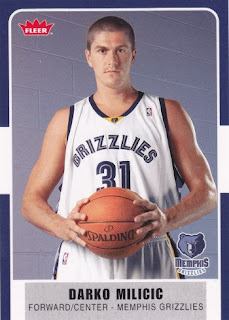 102 - Darko Milicic (Ahhh... him again? Does anyone here read freedarko.com?) 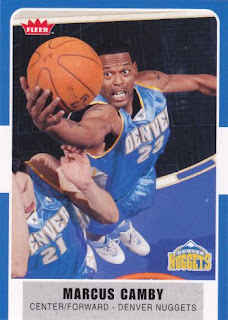 160 - Marcus Camby (Ugh, a Thugget. This is the one guy I liked before he came to Denver, but I was a pretty big fan of the Knicks as a whole in the '90s for some reason. And I take back what I said about the card backs in this set. They only show the player's last five seasons, which always bugs me. You get to see The New Ball in this photo.) 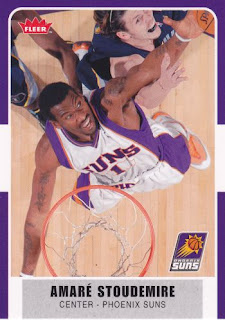 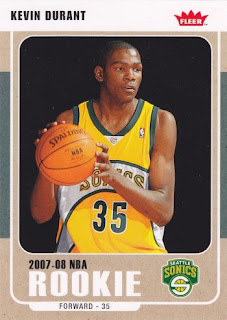 212 - Kevin Durant (This must be the marquee card of the set. It's always fun to get the wrapper cover player, although Durant is officially the enemy now that his team is an abomination and is also threatening to make the playoffs.)

Oh snap! I didn't know they were using a new ball.. I like it.

That was a synthetic cover ball that they tried to introduce in the 06-07 season. Unveiled in July, it was run out of the league by December.

I did like the styling of the now old "new" ball, but the league has been back to the same leather cover ball as before.

This is one reason I like to collect cards---odd little bits of history end up documented as the years go by.

I forgot all about that! Good times..