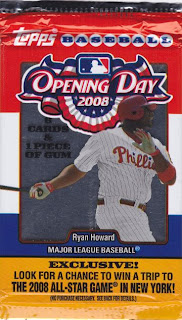 Here's another one to file under "I can't believe no one has posted one of these yet." These packs are a staple of just about every repack box on the market these days, which explains why I have received so many Cardinals from this set in recent days. The Cardinals look pretty good in this set, but overall I'm not sure if this was much of a hit, even for a 99 cent product. That being said, I'm glad that Opening Day is coming back for 2010 (from what I've heard anyway.) The more budget-priced products, the better. 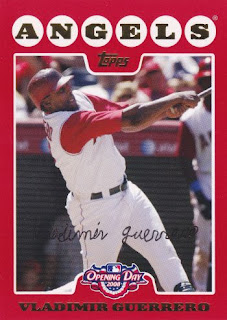 42 - Vladimir Guerrero (Guerrero's career is fading fast, which always surprises me. I guess I don't pay a whole lot of attention to players' ages or when they start their decline. Maybe it explains why I sometimes struggle at fantasy baseball.) 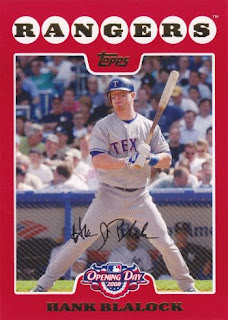 27 - Hank Blalock (Here's another supposedly on the decline, and he's not even 30 yet. What's up with that? Maybe that just means he wasn't very good to begin with. I read here that he is still looking for a team and may be without one for awhile yet.) 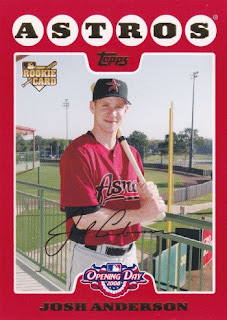 210 - Josh Anderson (This guy was good for about 2 weeks at the end of the 2007 season, and that's about it. Unfortunately, it seemed like most of those games were against the Cardinals.) 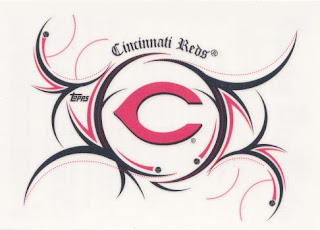 - Cincinnati Reds Opening Day Tattoo (It's a hit! These tattoo things are only available in 1 out of 12 packs, which means on average you'd have to spend around $12 to get one of these puppies. I performed some "computer magic" to make this thing appear as it would if you "tattooed" it on your hand or on somewhere worse.)
- David Wright filler card 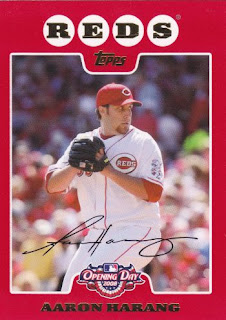 176 - Aaron Harang (Here you're starting to see what was so bad about the 2008 design. There's not nearly enough room for Harang in this frame. I'm not all that thrilled they went to the huge logos for the same reason.) 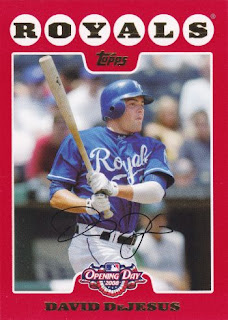 I dunno that Vlad's career is fading fast. He's slowing down a little, but he was injured a good bit of last year and still hit .295-15-50 in 100 games. The .794 OPS wasn't good at all by his future Hall of Famer-level standards, but hardly that of a guy on his last legs. Plus he's on the Rangers now, which can't be a bad thing for the ol' offensive output.