Written by Community Gum at 9:45 PM
Spring Training is upon us. It's a time when young prospects get a chance to shine and show their Major League teams what they're worth at the trade deadline. What better way to kick off the pseudo-season than with a pack full of minor leaguers. I had to open the pack before scanning the wrapper, because you can see right through it. I didn't want to ruin the surprise to come. 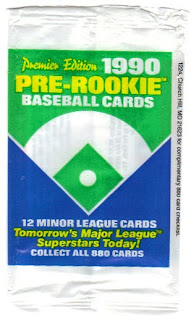 The pack promises 12 cards from a whopping 880 card set. We're apparently looking for "Tomorrow's Major League Superstars Today." Somehow I doubt we'll find too many of those. Now on to the surprise see-through first card. 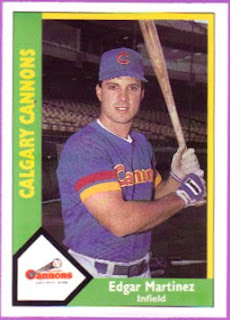 #439 - Edgar Martinez - Surprise! Hmmm...I guess you win this round, baseball cards. I must say, that's a pretty good way to start off a pack - getting a guy who will get into the Hall of Fame in 10-12 years. 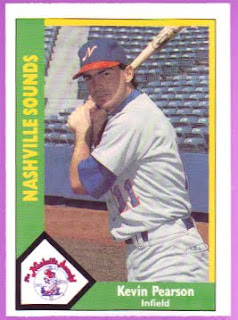 #142 - Kevin Pearson - Now I have to start using baseball-reference.com. This guy bounced between AA and AAA for 6 years (it looks like they toyed with making him a pitcher briefly as well), but gave it up a year after this card. Always living in the shadows as evidenced by his face in this picture. 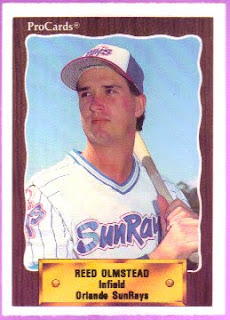 #754 - Reed Olmstead - From what I can tell, if the border makes the player look like Billy the Singing Bass, it indicates the guy is in A or AA ball. This guy never made it past AA and quit in '91 as well. However, unlike The Shadow up there, good ol'mstead returned to Independent ball for 2 years in '96-97 where he didn't do too badly. 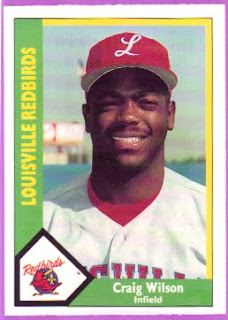 #115 - Craig Wilson - Hey, a part-time major leaguer! Squinty split time between AAA and the Cardinals (followed by the Royals). He was used as a utility guy and had a semi-good year in '93, which is why STL traded him to KC for Greg Jefferies. 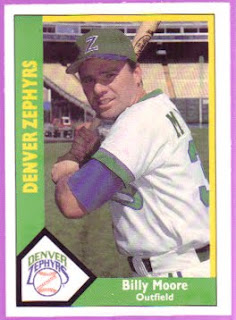 #36 - Billy Moore - Oh, Billy! He made it to the majors once, in 1986 for only 6 games. After that it was all AAA until hanging it up in '91. There was a lot of quitting in '91. Maybe they were all pursuing their other dreams and starting grunge bands. 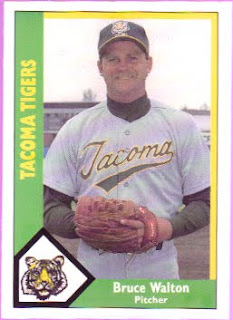 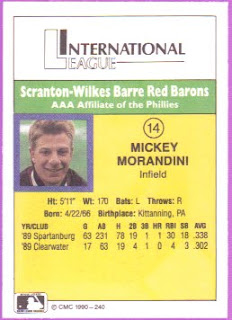 #240 - Mickey Morandini - I haven't shown the back of the cards yet. This young scrapper is an up-and-comer. One look at the stats and you can just tell he's going to someday turn an unassisted triple play! I'll say this counts as one of "Tomorrow's" stars since he was an All-Star. Oh, and if you're curious, look at the bottom left and you'll see the card number is actually after the dash on the copyright info. Very odd placing. 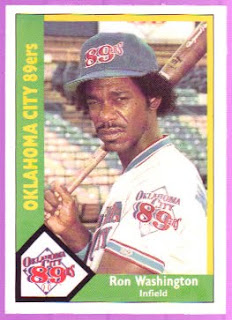 #165 - Ron Washington - Just look at that war-torn face. Ron "Boom Boom" Washington started in 1971 and at this point was back in the minors after a 9 year tour of duty through the majors (mostly with the Twins). This would be his last season, and who can blame him? He looks cranky from being so tired. 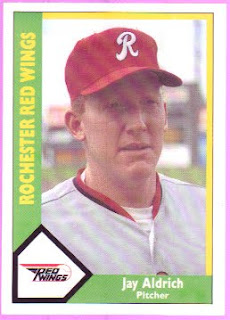 #307 - Jay Aldrich - Is it just me, or does he look like Orel Hershiser? He pitched in 62 games between '87 and '89-90 as a reliever. It looks like things just fell apart for the guy in that last year and he wouldn't pitch again. 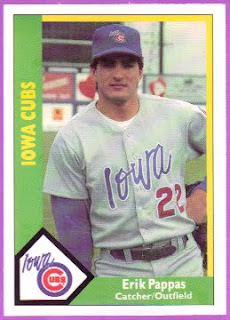 #92 - Erick Pappas - "Are you going to take this picture of what?" A lot of these stories are sounding the same. But at least we got ourselves a local boy. He had brief stints with the Cubbies and Cards, then went back to AAA for a few years before leaving the game in '96. 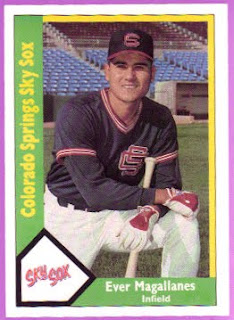 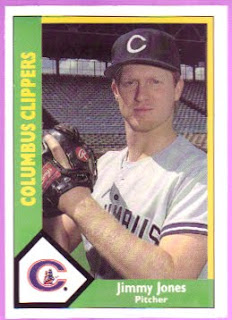 #223 - Jimmy Jones - He was about half minors and half majors. This is the only starting pitcher in the pack and he had a couple good years record-wise, but apparently always struggled with a high ERA, long balls, and wild pitches/hit batters. His last year was in '93.

I love old minor league cards. They make me feel so much better about my life choices, even though some of them made hundreds of thousands of dollars by having the careers listed above. Wait, what? Why did I go to college again?

Wow. I don't know how I missed that. I just double checked and the stats on the card are Edgar's. They both played for Calgary at this time. Does anyone have Tito's card to see if they're reversed?

Laurens beat me to it. Edgar was right-handed I believe.

"Ron Washington Admits to Using Drugs While A Player"

From the photo in this pack, I would have had no idea.