This caught my eye at my local Target. Five bucks, six cards- I generally don't like that ratio, but once can't hurt. 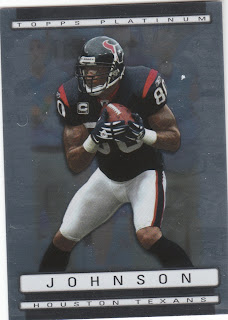 The top portion of the pack featured four of the six cards:
Donald Driver #65
Chris Cooley #81
Andre Johnson #48
These cards feature a glossy front, the likeness of Donruss Elite (pre-Panini). 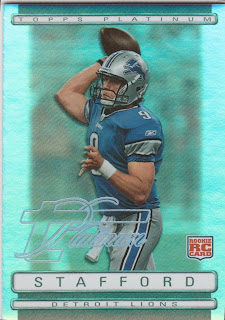 Matt Stafford SUPER THINK parallel, yeah that's what I'm calling it: #125, it is numbered to /1549, making this the best Stafford rookie I own (It tops a topps rookie). 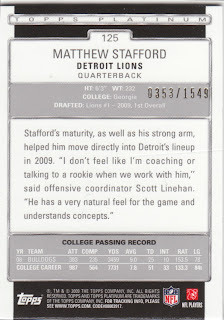 There's the back of the Stafford, which is like the back of all the other cards minus the gold numbering. The bottom portion of the pack featured two cards (both rookies) and they were a chrome card instead of a glossy-mirror. 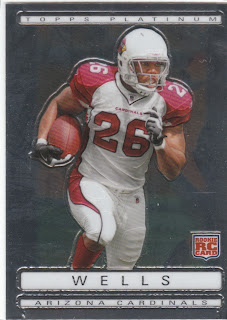 Beanie Wells #115 RC
Andre Brown #11 RC
I like these cards and they do have a high chance (for retail) of getting an auto or a patch 1:56 for a rookie auto refractor was the lowest I found, but none of the 1:7,914 ratios featured on some retail packs. Plus if you want to you can see the last name of the bottom rookie card pretty easily, so you can scan them for a Harvin, Maclin, Sanchez, Stafford, Freeman, etc. But c'mon we're better than that aren't we?

That's so weird... why bother making a two-paneled rack pack for 6 whole cards!