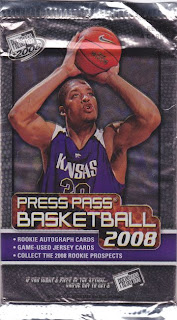 Tonight is NBA Draft night, so I felt like there was no other more appropriate time to post a pack of draft pick cards that I found in a cheapo repack box awhile back. I'm not familiar with Press Pass, HIT, Tristar or any of that sort of thing, so this is all new to me. Michael Beasley is the wrapper subject. Let's see if I can pull a card of that guy. 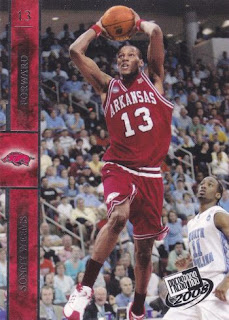 33 - Sonny Weems (Weems was drafted #39 in the 2008 Draft. Check out this little nugget from his Wikipedia entry: "Weems has the distinction of assisting a slam dunk competitor in back to back All Star Games: J.R. Smith in 2009 and DeMar DeRozan in 2010.") 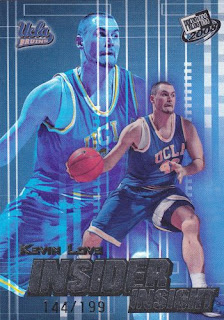 11-8 - Kevin Love Insider Insight 144/199 (Love was a local high school star who didn't get a lot of "love" from the fans in the area when he snubbed in-state schools to go to UCLA. That's never a popular decision.) 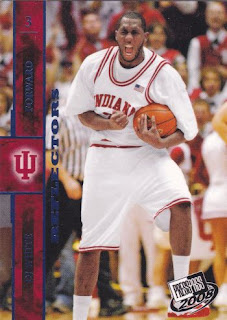 35 - D.J. White Reflectors (White was a late first round pick - #29 - who has played sparingly for the franchise that moved to Oklahoma City. I'm not sure what makes this a "Reflector" card, but I won't question it.) 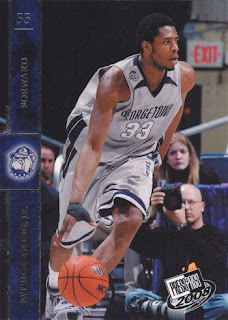 I like college basketball, so Press Pass works on me. I can see why others don't dig it. Do you think we've gotten over the Kevin Love college thing? I'm sure if he found himself in a Blazer jersey someday we'd all welcome him.

I think we're almost over it. He's pushed himself to the brink of irrelevance already just by virtue of being a member of the T-Wolves (and a sometimes injured one at that.)