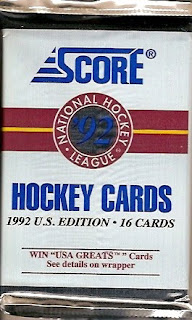 Not only I finally obtained a pack, but box of this set. I had hard time finding them and was lucky this was around. This is the U.S. version. I think Canadian version is the same thing but with both english and french printing. For this pack..... 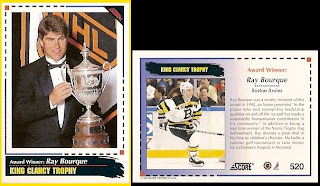 520 - Ray Bourque. A card of Bourque winning another trophy. This one is King Clancy Trophy which is for leadership on and off the ice. After many various trophies and awards he finally got the one thing that was missing in his mantle: Stanley Cup ring. 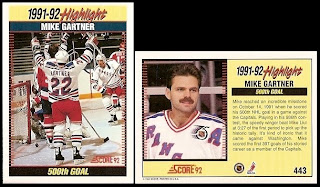 443 - Mike Gartner. A highlight card of Mike Gartner scoring his 500th NHL goal. Also showing the back on the card as well. While I do like him raising his arms in the air in celebration but wouldn't it be best to show him front first doing the celebrating?

508 - Shawn Chambers. Chambers in his new threads of Tampa Bay Lightning. This was expansion draft card. He played 2 1/2 seasons with the team before going to New Jersey Devils.

436. Pat Falloon. Franchise card featuring one of the league's draft bust. San Jose Sharks selected him second overall of 1991 draft ahead of Scott Neidermayer and Peter Forsberg. He never materialized as the team's future star player. His highest season's total was in his rookie season with 25 goals, 34 assists, and 59 points. He never reached that high in entire career bouncing around four more teams. Disappointing since he was scoring 60+ goals, making 60-70 assists, and 120-130+ in total points in the juniors.

387 - Ron Tugnutt. Here's a goalie that better late in his career. During this time he bounced around struggling til he found a home with Ottawa Senators putting up respectable numbers with the team. He was the goalie that led the Senators to the playoffs for the first time. After that Sens pretty much became playoff regulars.

362 - Jan Erixon. Spent his entire 10-year NHL career with the New York Rangers. He fought injuries with the most games he played in a season was at 70.

276 - Benoit Hogue. He has season highest point total during this season with 75 points.

163 - Ray Sheppard. He was hitting in his prime at this time with the Red Wings scoring goals. Played in two Cup finals, but both teams end up runner up.

157 - Bryan Trottier. "Trots" spent the last remaining years with the Penguins winning two more Cups to go with his four he won as an Islander. He retired after 91-92 only return back for 93-94 season. After a coaching stint with hated rivals Rangers he now works in the Islanders front office.

143 - Rod Langway. Before there was "Alex the Great" there was "Secretary of Defense." The Hall of Famer was one of greatest defensemen to play the game helping the Capitals become a playoff team as they made it in his entire 11-year tenure there. For sport trivia buffs he is the first (and only) Taiwan-born player to play in the NHL.

13 - Fredrik Olausson. Spent 16 years in the NHL before playing his remaining four years of his career in Sweden. Reportedly awaiting a liver transplant.

7 - Mark Tinordi. The team's captain and enforcer at the time.

102. Teppo Numminen. He was in his fourth year of his twenty year NHL career. One of better defensemen to play in the 90s and 2000s.

98 - Todd Krygier. Look up YouTube and he gets his ass handed to him.

Brickley is part of the super annoying NESN broadcasting duo, along with the terrible Jack Edwards.

I think he fills in on Versus on occasion.